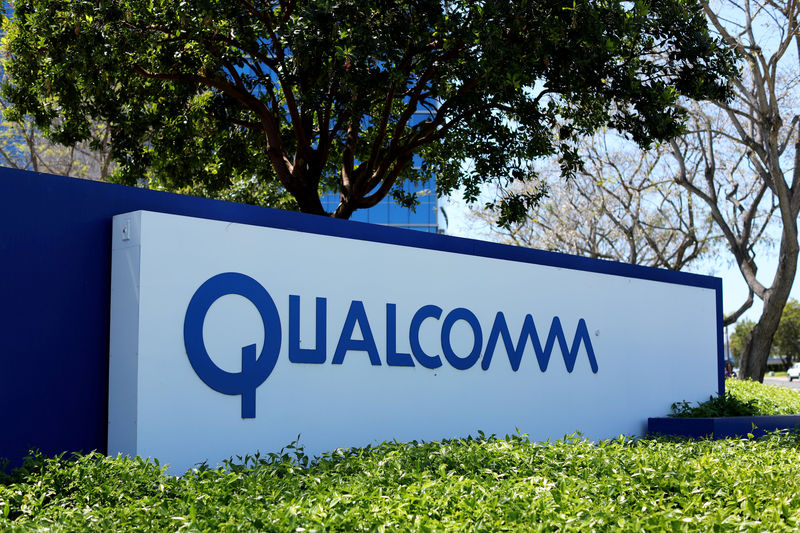 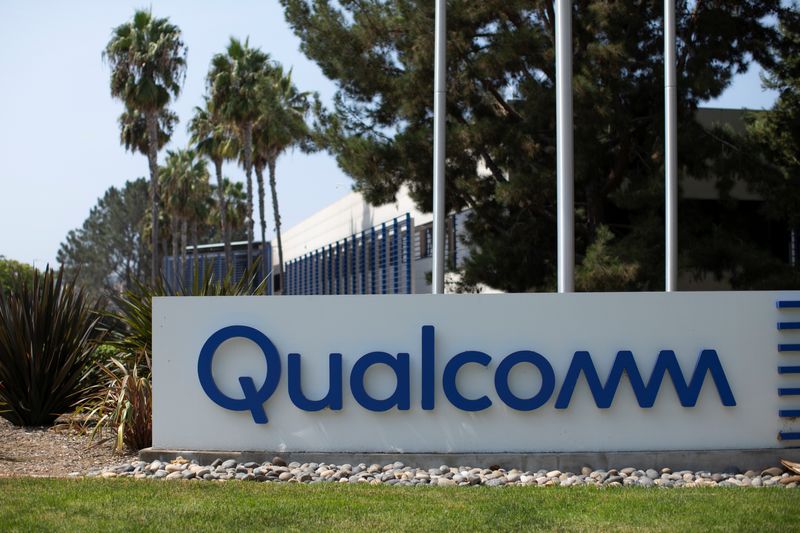 © Reuters. FILE PHOTO: A Qualcomm sign is shown outside one of the company’s many buildings in San Diego, California, US, September 17, 2020. REUTERS / Mike Blake

(Reuters) -Qualcomm Inc forecast third-quarter revenue above analyst expectations after beating second-quarter revenue and profit estimates on Wednesday, largely due to its move to focus on a growing non-handset business to cushion a likely hit from slowing smartphone demand.

The strong earnings outlook and record quarterly revenue for the last quarter immediately pushed Qualcomm (NASDAQ 🙂 shares up about 5% in after-hours trading.

Lockdowns in China, war in Ukraine and rising inflation has taken a toll on consumers, preventing them from spending on electronic gadgets like phones. However, Qualcomm remained cushioned from this as the premium smartphone market, where Qualcomm is the leader, was not as impacted by slowing demand as lower-priced phones, Chief Executive Officer Cristiano Amon told Reuters.

To reduce its dependence on handsets, Qualcomm has been diversifying its revenue streams by catering to other markets including automotive, and that strategy has been a success so far, Amon said.

Increased adoption of 5G and cloud-based applications has helped Qualcomm, which makes chips that enable devices to connect to mobile data networks as well as wireless networks. Qualcomm also launched the latest version of its flagship chipset brand Snapdragon during the second quarter.

Revenue from chips catering to automotive and internet-powered gadgets rose 41% and 61%, respectively, during the second quarter, while revenue from its mainstay handset business rose 56%, thanks to the new Snapdragon launch.

Moreover, Qualcomm is weighing the impact of slowly losing business from Apple (NASDAQ 🙂 by taking advantage of the gap left by Huawei in the China smartphone market by fulfilling chip needs of Chinese brands like Oppo, Vivo and Xiaomi (OTC :), especially for high-end phones.

The company forecast current-quarter revenue between the range of $ 10.5 billion and $ 11.3 billion, compared with analysts’ estimates of $ 9.98 billion, according to IBES data from Refinitiv.

3/3 © Reuters. FILE PHOTO: A Qualcomm sign is shown outside one of the company’s many buildings in San Diego, California, US, September 17, 2020. REUTERS / Mike Blake 2/3 By Chavi Mehta and Jane Lanhee Lee (Reuters) -Qualcomm Inc forecast third-quarter revenue above analyst expectations after beating second-quarter revenue and profit estimates on Wednesday,…