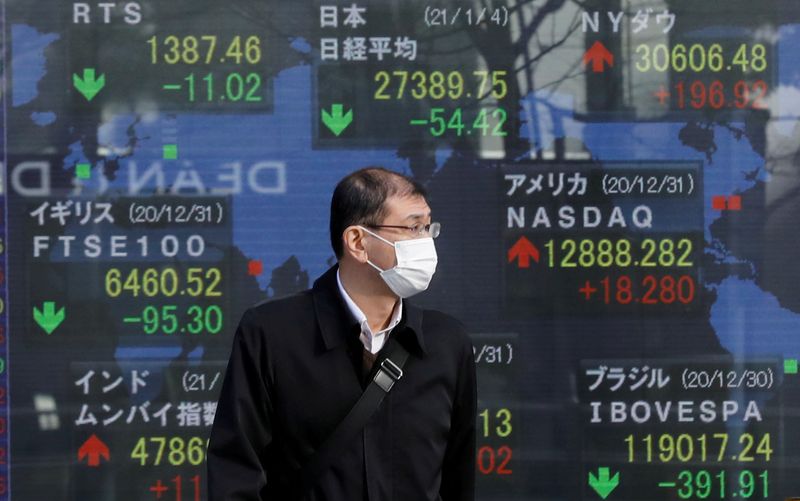 © Reuters. FILE PHOTO: A man wearing a facial mask, following the coronavirus disease (COVID-19) outbreak, stands in front of an electric board showing Nikkei (top in C) and other countries stock index outside a brokerage at a business district in Tokyo, Japan, Janu

SINGAPORE (Reuters) – Share markets steadied on Thursday, taking comfort in technology earnings, though an energy crisis in Europe and China’s lengthy lockdowns kept the mood cautious and have propelled the dollar close to 20-year highs as investors seek out safety and yield.

were up 1% in the Asia session and rose 0.7% after Facebook (NASDAQ 🙂 owner Meta beat Wall Street profit forecasts and said it had eked out user growth, sending its shares up almost 20% after hours.

MSCI’s broadest index of Asia-Pacific shares outside Japan rose 0.5%, led by a 1% bounce in Australian stocks from Wednesday’s one-month trough. ()

“The real question is, whether this really matters for a sustainable turnaround in otherwise fraught global circumstances,” said Vishnu Varathan, head of economics at Mizuho Bank in Singapore.

“Volatility is still high … even if not outright fear, the trepidation is hard to miss with on-going uncertainty from the war in Ukraine, which continues to threaten with more widespread economic pain.”

The most recent pressure point has been Russia’s halt on gas supplies to Bulgaria and Poland on Wednesday, which sent tremors through European energy markets and whacked the euro.

Benchmark European gas prices jumped 10% overnight while the euro hit a five-year low of $ 1,0514 and is headed for its worst month since early 2015.

The currency is now perilously close to huge chart support levels stretching from $ 1,0500 down to a trough from 2017 at $ 1,0344. A break would take it to depths not seen since 2002 and risk a damaging decline below parity. [FRX/]

“With Covid lockdown fears in China exaggerating upside risks for the dollar we recognize the possibility of a stronger-for-longer dollar,” said Rabobank FX strategist Jane Foley, adding the bank was revising its forecast for a euro rebound.

US growth data is due later on Thursday and could pause the dollar’s advance, especially since overnight data showed a blowout in the US trade deficit and prompted forecast downgrades.

Elsewhere the Japanese yen was under pressure at 128.71 ahead of the Bank of Japan’s policy meeting, also on Thursday, where focus will be on any sort of response to the yen’s recent slide.

Oil inched lower and futures were last down 0.4% to $ 104.95 a barrel on concern about Chinese demand as rising coronavirus cases suggest extended lockdowns. [O/R]

© Reuters. FILE PHOTO: A man wearing a facial mask, following the coronavirus disease (COVID-19) outbreak, stands in front of an electric board showing Nikkei (top in C) and other countries stock index outside a brokerage at a business district in Tokyo, Japan, Janu By Tom Westbrook SINGAPORE (Reuters) – Share markets steadied on Thursday,…