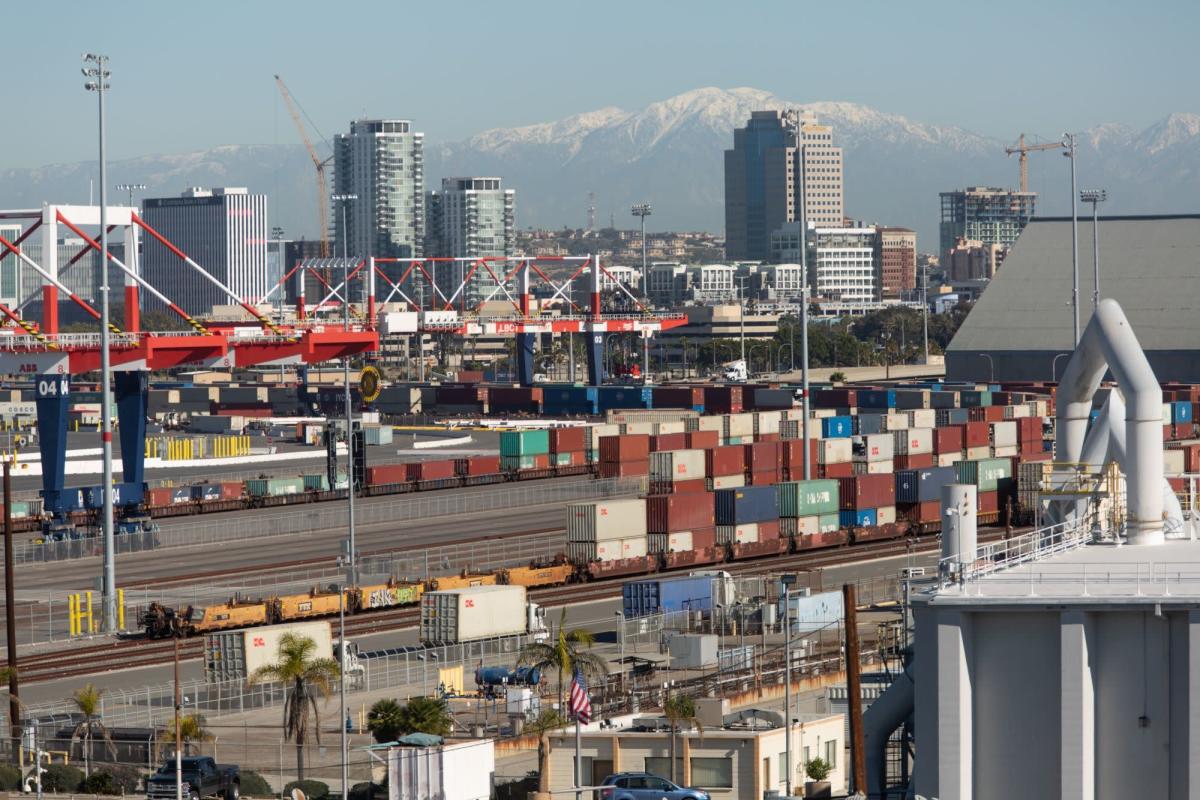 (Bloomberg) – The US economy shrank for the first time since 2020, reflecting an import surge tied to robust consumer demand.

Gross domestic product fell at a 1.4% annualized rate in the first quarter following a 6.9% pace at the end of last year, the Commerce Department’s preliminary estimate showed Thursday. The median projection in a Bloomberg survey of economists called for a 1% increase.

The report is more an illustration of how GDP calculations tend to be volatile from quarter to quarter, not necessarily indicating weakness in the economy or a sign of recession. The contraction was due to a jump in imports and a drop in exports, coupled with a slower buildup of businesses’ stockpiles. On a year-over-year basis, the economy grew 3.6%.

Together, trade and inventories subtracted about 4 percentage points from headline growth. Government spending shrank, also weighing on GDP. But real final sales to domestic purchasers, a measure of underlying demand that strips out the trade and inventories components, accelerated to a 2.6% annualized rate.

Against a backdrop of quicker inflation and solid spending, Fed monetary policy is still geared for a half-point rate hike next week. Nonetheless, officials need to balance tighter policy with risks to demand.

The economy faces other potential headwinds that include knock-on effects from Russia’s war in Ukraine. Growth prospects in Europe are deteriorating, some raw materials are in short supply and the Chinese government’s severe pandemic-related lockdown measures are leaving supply chains in disarray.

The S&P 500 rose and the yield on the 10-year Treasury note remained higher along with the dollar.

“With strong growth in consumer spending, business investment and employment in the first quarter, the US economy was not in a recession at the beginning of the year,” said Bill Adams, chief economist at Comerica Bank. “Growth should resume in the second quarter as the trade deficit and inventories become smaller headwinds.”

Biden blamed the contraction “technical factors,” saying in a statement that employment, consumer spending and investment all remain strong.

The Commerce Department’s data showed personal consumption, the largest part of the economy, rose an annualized 2.7% in the first quarter, compared with 2.5% at the end of 2021. Services spending added 1.86 percentage points to GDP, while goods purchases stagnated, reflecting changing consumer behavior.

At the start of this year, spending surged as Covid-19 cases declined. As the quarter dragged on, high inflation began to take a bite out of purchasing power. Nonetheless, many corporate executives on recent earnings calls touted the durability of the American consumer.

“A substantial drag from trade – a result of weak exports amid a global growth slowdown, coupled with robust imports due to strength in both domestic demand and the dollar – will prove temporary, with trade flows normalizing as the year progresses. Consumer and business spending is gaining momentum going into the second quarter, which we estimate will keep GDP growth above trend for the year. ”

Looking forward, rapid inflation and dwindling fiscal support point to more moderate growth in outlays for the remainder of the year. Furthermore, higher interest rates may at some point prompt companies to trim capital expenditures budgets.

Last quarter, inflation-adjusted business investment increased an annualized 9.2%, the firmest in a year and reflecting stronger equipment spending and intellectual property, according to the GDP report.

Residential investment rose at a 2.1% pace, as builders began making some headway on backlogged projects. While underlying housing demand remains strong, a rapid rise in mortgage rates and record-high home prices are weighing on affordability and could begin weighing on homebuilding later this year.

How Executives See It

“If anything, discretionary spending, especially from affluent consumers and credit cardholders, has been going up quite healthily. So in general, there is no obvious impact on inflation. ” – Visa Inc. CFO Vasant Prabhu, April 26 earnings call

The report showed trade subtracted 3.2 percentage points from GDP in the first quarter, reflecting a surge in imports and a drop in exports. The US economy has recovered more quickly from than pandemic than many countries abroad, bolstering demand for foreign-made goods.

The change in inventories subtracted 0.84 percentage point from the headline figure during the January-March period. In the fourth quarter, they added a whopping 5.3 points. Looking ahead, businesses will continue to replenish their inventories in an effort to restock following the robust merchandise demand seen in 2021.