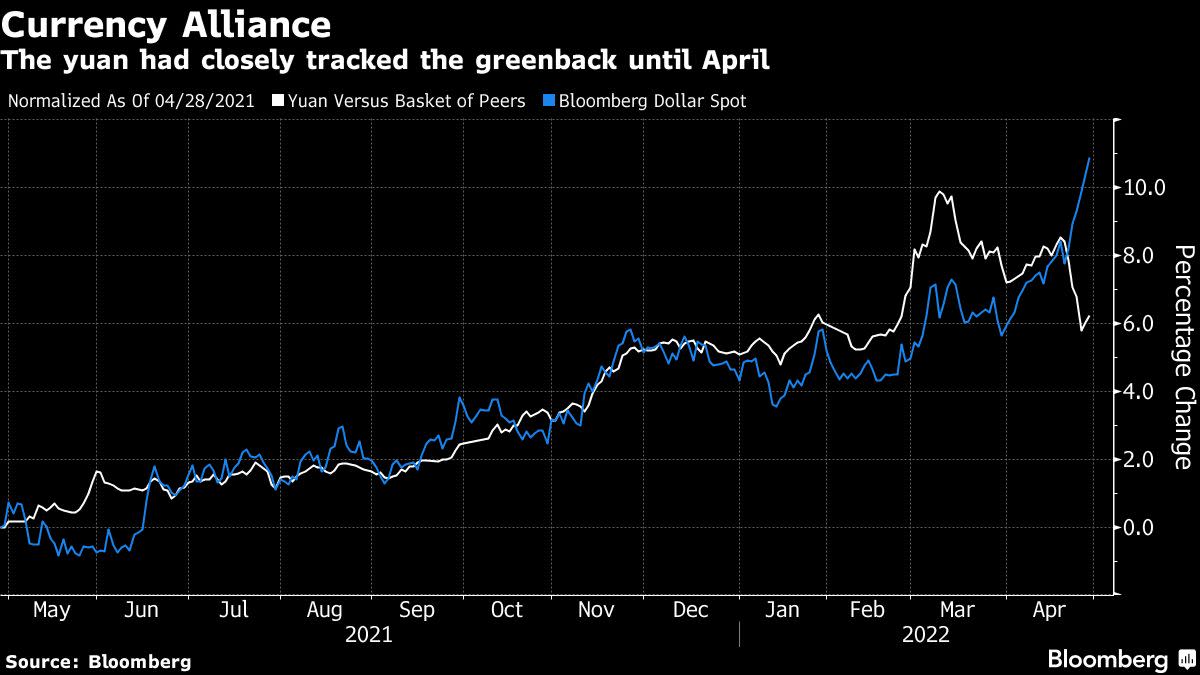 (Bloomberg) – When China’s tightly managed currency depreciates dramatically against the dollar, it can be hard to stop.

More than six years after China’s shock 2015 devaluation roiled global markets and spurred an estimated $ 1 trillion in capital flight, the yuan is weakening at a similar pace. Onshore it’s lost nearly 4% in eight days, while the offshore rate is heading for its worst month relative to the greenback in history. Selling momentum is the strongest since the height of Donald Trump’s trade war in 2018.

There are plenty of reasons for the yuan to weaken against the dollar, namely diverging monetary policies, interest rates and economic conditions. And the yuan is not even keeping pace with many of China’s big trading partners, strengthening relative to the euro, the yen and the Australian dollar this month. In short, China may just be allowing its currency to break with a rallying dollar.

But there’s a risk such moves will accelerate, or suggest a loss of confidence in China at a time when global funds are already pulling out of the country’s assets. Pressure is building as President Xi Jinping prepares for the 20th Party Congress later this year – a twice-a-decade leadership shuffle that’s expected to secure him a third term in power. Policy makers including the People’s Bank of China have repeatedly pledged to boost sentiment in financial markets – to little avail – while avoiding the kind of heavy-handed intervention that spooked global investors in 2015. The sell off in the onshore and offshore yuan deepened Friday after the nation’s health officials vowed to stand by its zero-covid policy.

“China can not afford a massive outflow of capital right now,” said Alicia Garcia-Herrero, Natixis SA chief Asia Pacific economist. “The PBOC may mitigate the yuan move lightly because they have a clear memory of 2015. They will do their best not to be seen as pushing capital controls, especially ahead of the 20th Party Congress.”

There is plenty of room for the currency to weaken. The yuan is coming off a high base after appreciating against every major peer last year, and surging to the strongest on record against a basket of trading-partner currencies. Surging demand for Chinese goods during the pandemic beefed up exporters’ earnings. At the same time the resilient economy and strengthening currency lured foreign investors to sell dollars for yuan to buy Chinese stocks and bonds. Authorities were clamping down on speculation in the strengthening currency as recently as December.

Intervention has been limited.

While the PBOC this week increased the supply of foreign exchange onshore, the move was not even enough to reverse changes made in December. It has various other tools at its disposal to manage the yuan, the most visible of which is a daily reference rate set against the dollar – used by China when it devalued in 2015. But Friday’s fixing was only slightly stronger than expected. There was also little sign of state banks buying yuan at the close, said traders who asked not to be identified because they are not authorized to speak publicly.

“While Chinese policy makers have clearly signaled their discomfort with the speed of this move, tolerance for gradual CNY depreciation may remain part of the policy toolkit to support Chinese growth in coming months,” Ian Tomb, an analyst at Goldman Sachs Group Inc. in London, wrote in a note this week.

But controlling the pace of declines without intervention is another matter. When the yuan weakened past the key psychological level of 7 per dollar in 2019, it went on to depreciate another 2.6% to 7.1854 before stabilizing. The depreciation was due to factors that were less “toxic” for the currency than they are now, said David Qu, an economist covering China for Bloomberg Economics.

China’s stocks are tumbling and its government bonds no longer offer carry over comparable Treasuries, diminishing the appeal of yuan-denominated assets. Covid lockdowns and a slowing property market are darkening the outlook for the economy, with one recent forecast calling for sub-4% growth this year. Chinese state media last week said slowing exports, a hawkish Federal Reserve and capital outflows from emerging markets will weaken the yuan this year.

Wang Chunying, spokeswoman for the State Administration of Foreign Exchange, said last week China “has the foundation and conditions to adapt to the Fed’s policy adjustment.” Recent moves in the currency were driven by the market and expectations on the yuan have been “basically stable,” she said.

There are also drivers beyond China’s control, namely monetary policy elsewhere. The Bank of Japan on Thursday sparked a selloff in the yen and other Asian currencies by doubling down on its bond buying pledge. The onshore yuan slipped past 6.60 per dollar for the first time since 2020, while the offshore rate slipped as much as 1.1% to 6.6566.

China has long been paranoid about the risks posed by capital flows, which is why authorities maintain strict controls on money entering and leaving the country. Policy makers tightened restrictions after the messy yuan devaluation in 2015, filling gaps to prevent undesirable outflows while expanding official channels with managed quotas. That includes two-way trading between Hong Kong and the mainland, which is kept in a closed-loop system.

The strongest dollar in nearly two years can be a challenge for China’s policy makers, who have to choose between allowing the yuan to rise alongside the US currency – thereby hurting exporters – or push it lower and risk spurring outflows. The current choice appears to be the latter: March data already showed slower export growth, before the protracted lockdown in Shanghai.

“When dollar-yuan moves up, all the bad stuff starts to happen – capital outflows tightening liquidity – so it’s a very difficult balancing act for the central bank,” Adarsh ​​Sinha foreign exchange strategist at Bank of America & Corp. said on Bloomberg Television. “They want a weaker yuan from a competitiveness point of view but engineering that in an orderly manner as we know historically has been quite difficult.”

(Bloomberg) – When China’s tightly managed currency depreciates dramatically against the dollar, it can be hard to stop. Most Read from Bloomberg More than six years after China’s shock 2015 devaluation roiled global markets and spurred an estimated $ 1 trillion in capital flight, the yuan is weakening at a similar pace. Onshore it’s lost…

DICE makes raft of executive hires across Europe and US