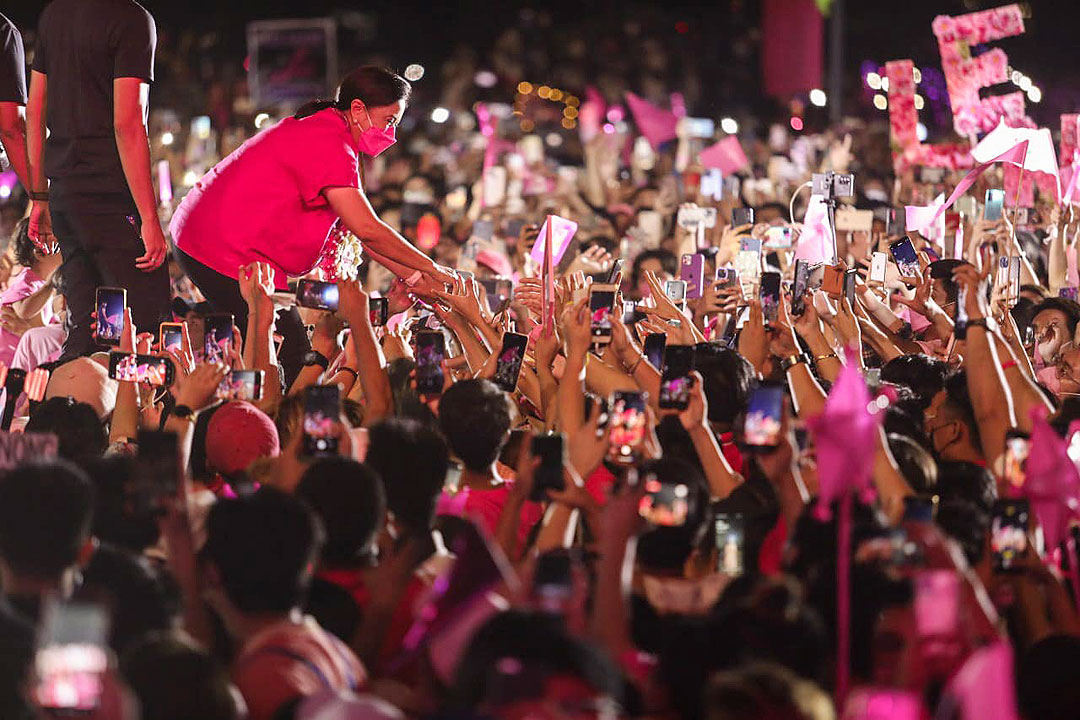 WITH just weeks to go before the Philippines holds a presidential election, the lone female candidate is attracting some of the biggest pre-election crowds in decades as she seeks to pull a stunning upset against frontrunner Ferdinand “Bongbong” R. Marcos, Jr.

Maria Leonor “Leni” G. Robredo, who became vice president in 2016 after defeating Mr. Marcos, has dispersed more than two million volunteers to go house-to-house and visit local markets to talk about her accomplishments and counter disinformation on social media that her campaign says comes from her opponents.

The question is whether the groundswell of support for Ms. Robredo is too little, too late: A poll in March found the 57-year-old lawyer was trailing by more than 30 percentage points to Marcos Jr., the only son of the late Philippine dictator Ferdinand E. Marcos.

“Many are heckling us, saying we do not have a chance to win. Do you believe that? ” Ms. Robredo asked a crowd her campaign said exceeded 400,000 people during her birthday rally on April 23. “No!” cheered her supporters who came in droves to the gathering in Pasay City on the outskirts of the capital.

It’s not the first time Ms. Robredo has been in this position. In polls before the 2016 vice presidential race, Ms. Robredo trailed Mr. Marcos by six percentage points just a month before the vote and managed to defeat him by a slim margin, resulting in a lengthy legal battle.

This time around she has a much steeper climb, thanks in part to Mr. Marcos’s running mate, Sara Duterte-Carpio. The daughter of President Rodrigo R. Duterte had been running first in presidential surveys before she decided to go for the No. 2 role. The formidable alliance combines the northern strongholds of the Marcos clan with the popularity of the Dutertes in the south.

Ms. Robredo has sought to appeal to suburban voters wary of a return to the Marcos years. Her rise in politics has mirrored that of former president Corazon C. Aquino, who led the revolt against Marcos after her husband was assassinated by military escorts at the Manila international airport in 1983. Ms. Robredo took part in those protests, which she described as a “political awakening.”

She entered politics after her spouse, then a member of the cabinet of former President Benigno “Noynoy” SC Aquino III, died in a plane crash in 2012. In the 2016 race, Ms. Robredo used the color yellow in her campaign against Mr. Marcos, similar to what Corazon Aquino did years earlier while opposing his father.

This time, however, Ms. Robredo is standing as a last-minute independent after the opposition failed to agree on a candidate. She chose pink as a campaign color, taking a cue from her supporters who used the color in social-media profiles when they saw her wear a bright pink ribbon to announce her candidacy in October.

The only woman among the 10 presidential contenders, Ms. Robredo is running on a platform that an honest and effective government will lead the Southeast Asian nation to inclusive prosperity. Rappler columnist Jamina Vesta Jugo said the choice of pink emphasizes Ms. Robredo’s “public femininity” in a political realm dominated by the “macho posturing” of Mr. Duterte’s administration.

Mr. Marcos has stayed ahead in part due to social media posts and online commentary that say his father’s rule was a golden era and deny that atrocities were committed. A cautious speaker, he has largely focused on messages of unity in rallies, brought together by local politicians, and shunned presidential debates.

In contrast, Ms. Robredo has faced a barrage of disinformation on social media, forcing her to deny several times that she is having affairs. The latest attack against her as the vote draws near was a fake sex video of her eldest daughter.

“Sexism is part of the arsenal of disinformation actors,” said Nicole Curato, a sociology professor at the University of Canberra. “These are meant to humiliate women who are active in politics. It also sends a signal to other women who wish to speak up and take part in politics. ”

Ms. Robredo said she regrets ignoring online attacks earlier and has urged supporters to fight lies with truth and to knock on doors to woo the undecided. Her campaign says the biggest jumps in support comes whenever she attends rallies in the provinces and interacts with her volunteers on the ground, an unusual strategy in a nation where local politicians tend to organize voters.

“We did not have the machinery, the air war,” campaign spokesman Barry Gutierrez said. “What we did have is a large, heavily invested volunteer army.”

Among those volunteers is 32-year-old Annie Maligaya, who leads a group of neighbors who banded together to campaign for Ms. Robredo, picking up the tab for transportation, meals and campaign materials.

“I’ve attended several webinars where we share tips on how to converse with people and convert them,” she said in Mandaluyong City in the capital region. “Do not let hecklers demoralize you, just focus. Reach out to as many as you can. And the suggestion is to keep the conversation as light as possible. ”

At a recent rally in Bataan province north of Metro Manila, an area where Mr. Marcos has received the endorsement of local politicians, some 65,000 people showed up at Ms. Robredo’s rally. “We will not surrender Bataan,” the crowd chanted, referring to Filipino and American soldiers’ last stand in the province against the Japanese during World War II.

Still, it’s not clear if Ms. Robredo is reaching a broader audience despite the enthusiasm she generated, said Cleo Calimbahin, a political science professor at De La Salle University.

“The concern is, will the momentum be enough to win the election? Can these crowds translate to votes? ” she said. “I do not think they have cracked the code.” – Bloomberg

Vice President Leni Robredo’s campaign rally held in Pampanga on April 9. – VP LENI ROBREDO FB PAGE WITH just weeks to go before the Philippines holds a presidential election, the lone female candidate is attracting some of the biggest pre-election crowds in decades as she seeks to pull a stunning upset against frontrunner Ferdinand…