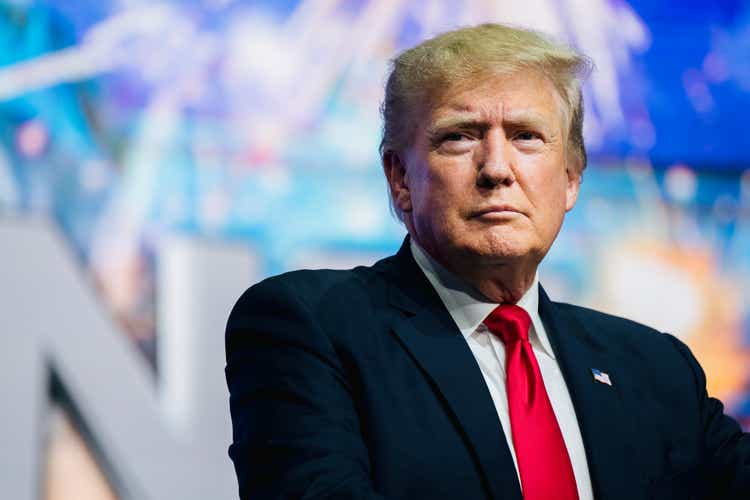 Trump SPAC Digital World Acquisition (NASDAQ: DWAC), which is taking Trump’s social media platform public, jumped 15% in after hours trading after Trump posted on his new platform Truth Social. The shares rose 7.9% in regular trading, gaining for a third day in a row.

“I’M BACK! #COVFEFE,” Trump posted on Truth Social Thursday afternoon with a photo of himself in front of his Mar-a-Lago estate in Palm Beach, Florida, according to a Fox News report. Trump currently has 2.05 million follows on Truth Social. He had about 88 million followers on Twitter (TWTR) before he was banned.

The stock move comes as Trump’s Truth Social app is listed as the No. 1 downloaded app in Apple’s App store and has been the last few days. Downloads jumped to more than 55,000 on Tuesday from less than 6,000 the week before, according to a Bloomberg report on Wednesday, which cited Apptopia estimates. Truth Social’s daily active users gained 20% to 365,000 vs. a week earlier.

The positive moves in the stock come as the shares had fallen 63% since from a high in early March until Tuesday. DWAC has gained 34% in the past three days.

The gain in DWAC shares since Tuesday comes after Trump on Monday said he would not go on Twitter (TWTR) even if Musk invited him back on the platform and as the former President said he planned to post on Truth Social soon. The share gains reversed a 13% decline on Monday after the Twitter deal with Musk was announced.

DWAC have been weak in recent weeks following the disclosure that Musk had taken a large stake in Twitter. DWAC investors are concerned about increased competition from a Twitter run by Musk, who has argued that his bid for TWTR is really about free speech.

DWAC shares fell last Wednesday and Thursday in the wake of a short report from Kerrisdale that argued that the SPAC likely will not secure the regulatory approval necessary to complete its purchase of Trump Media & Technology Group.

According to a Fox Business news report and tweet from Charlie Gasparino, now may be the calm before the storm for DWAC shares. He said Wednesday that short sellers have been accumulating the shares, but they are waiting for the SEC to approve the release of about 200 million DWAC shares because it is currently difficult to short the shares.

“The smart money on Wall Street is betting heavily against the Digital World Acquisition and Trump Social,” Gasparino said on Fox Business on Wednesday.