Zondo praises EOH for coming clean, but says it cannot keep the proceeds of corruption

Volume 1 of the latest section (Part 4) of the Zondo Commission report into the state capture years, released on Friday and partly covering JSE-listed tech group EOH, showers praise on the company and its current CEO Stephen van Coller for proactively engaging ENS Forensics to investigate allegations of corruption at the company.

However, it also says that EOH should no longer be allowed to retain the benefits of historical corrupt and irregular procurement practices.

Read Volume 1 of Part 4 of the Zondo Report here

Part 4 of the report, which includes four volumes, was handed over to the Presidency by Prof Itumeleng Mosala, Secretary of the Zondo Commission.

“Under the leadership of Mr [Stephen] van Coller and its current Board, EOH… is pro-actively investigating its historical involvement in corrupt and irregular procurement processes, bringing the relevant facts to the attention of the authorities and tendering to make reparation to the organs of state at whose expense it profited from these practices. ”

Evidence submitted by Van Coller to the Commission depicts a corporate environment in which wrongdoing was able to thrive at EOH, with high concentrations of power in the hands of a few executives; inflated software license sales; a succession of tender irregularities; the use of politically-connected middlemen to bring in sales; and a system of gifting and payment to subcontractors for which there was no evidence of work.

A recurring theme of the investigation was over-invoicing of public sector clients and inflation of prices.

In his evidence to the Zondo Commission, Van Coller highlighted two Microsoft licensing deals with the Department of Defense and an SAP licensing agreement with the Department of Water Affairs. EOH was able to by-pass procurement procedures required by the State Information Technology Agency and charged for more licenses than were delivered, and at a rate per license higher than would be achieved in a competitive bidding situation.

Read: Can EOH become the poster child for crisis turnaround?

EOH was also allowed to frame the terms of tenders to suit itself and shut out competition. It was also putting in bids for tenders at below cost with a view to bumping up the cost once the tender was awarded to it.

EOH identified R865 million that it spent on kickbacks and commissions to politically connected intermediaries.

The company also made payments to the ANC and was engaged in ‘suspicious personal and organizational sponsorships and [spent] excessive entertainment amounts’ to influence procurement practices in organs of state.

The Zondo report delves into what it says was an improper relationship between EOH subsidiary Tactical Software Solutions (TSS) Management Services and Geoff Makhubo, the late mayor of the City of Joburg.

TSS was owned by Jehan Mackay and his father Danny Mackay and was acquired by EOH in 2011, and then renamed EOH Africa.

Patrick Makhubedu was its business development executive and developed a close personal relationship with Makhubo, to the point of partnering up in several private companies, along with Reno Neil Barry, former group financial manager at Tactical Software Solutions, which had not been acquired by EOH. 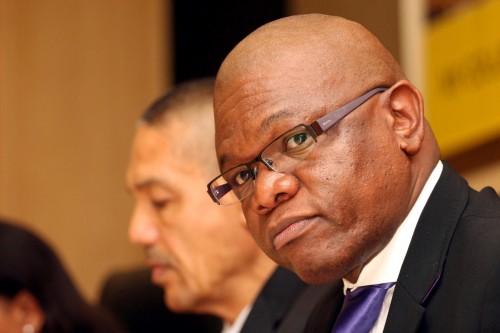 Geoff Makhubo, the late mayor of the City of Joburg, who has been fingered extensively in the latest section of the Zondo Commission report into state capture. Image: Moneyweb

Makhubedu was able to use his relationship with Makhubo to win contracts worth several hundred million rand from the City of Joburg. Makhubedu resigned from EOH on 11 March 2019, the day before he had been called in for an interview with ENS Forensics.

In another instance, EOH submitted an unsolicited proposal for the upgrading of the Joburg’s network and security infrastructure at a price of R106 million, and on the same day EOH Managed Services donated R3 million to the Greater Johannesburg Region of the ANC.

In 2013 and 2014, EOH paid more than R5 million to the ANC, and Makhubo was reminded of this largesse when the company submitted its invoice for R109.7 million for the network and security upgrade, which was an amount higher than originally proposed in the unsolicited proposal. That amount was paid by the City of Joburg on 12 September 2014.

A few days later came another request to EOH from the Tshwane regional secretary for the ANC for a donation of R300 000.

The requests for money kept coming. The next one, from Makhubo to Makhubedu, was for R4.3 million to cover the costs of a regional ANC conference.

An amount of R1.5 million was paid by TSS Managed Services into the bank account of the Greater Johannesburg Region of the ANC on 2 October 2014.

“To his knowledge, as an elected official and MMEC of the City, Mr Makhubo had no business involving himself in procurement matters, particularly not unsolicited proposals from an entity from which he had recently solicited substantial donations for the ANC,” says the report.

The Zondo Commission says this evidence leads inexorably to the conclusion that EOH improperly benefited from the unsolicited bid to the tune of more than R100 million.

The report further details payments made by TSS Managed Services to Makhubo’s company, Molelwane, and then an amount of R200 000 into Makhubo’s personal account.

On 2 June 2016, EOH Mthombo was awarded a contract by the City of Joburg for R404 million for various services and equipment. The Commission heard testimony from ENS Forensics that donations to the ANC were made through an intermediary, Mfundi Mobile Networks.

The Commission recommends law enforcement agencies investigate these allegedly corrupt tenders with a view to prosecuting Makhubedu, Jehan Mackay and others involved in the transactions.

Also named in the report is Zizi Kodwa, Deputy Minister in the Presidency responsible for state security, who received R1.7 million from Jehan Mackay, allegedly to procure influence – though Kodwa testified that these amounts were loans, not a quid pro quo for assistance a winning tenders.

Whatever the subjective intentions of Kodwa, “it is clear that Mr Jehan Mackay was attempting to buy influence by making the ‘loans’ that he made to Mr Kodwa and by providing Mr Kodwa with luxury accommodation,” says the report.

Email correspondence between Mackay and Kodwa suggests there was the carrot of further donations to the ANC in return for the favorable review of tenders.

The Commission says it could find no impropriety on the part of Kodwa, though time constraints prevent a more thorough investigation.

The terms of reference of the Commission were too wide to investigate wrongdoing and state capture in all metros and municipalities. Even in the case of City of Joburg, it investigated less than a handful of irregular tenders.

“However, when one realizes what EOH and Mr Makhubo were doing, one realizes that there may be many municipalities in which certain entities do exactly what EOH used to do [in] relation to the City of Johannesburg, ”concludes the report.

As Moneyweb previously reported, EOH is suing former CEO Asher Bohbot and several former executives for several billions of rands in damages for governance lapses when they led the company.

Volume 1 of the latest section (Part 4) of the Zondo Commission report into the state capture years, released on Friday and partly covering JSE-listed tech group EOH, showers praise on the company and its current CEO Stephen van Coller for proactively engaging ENS Forensics to investigate allegations of corruption at the company. However, it…