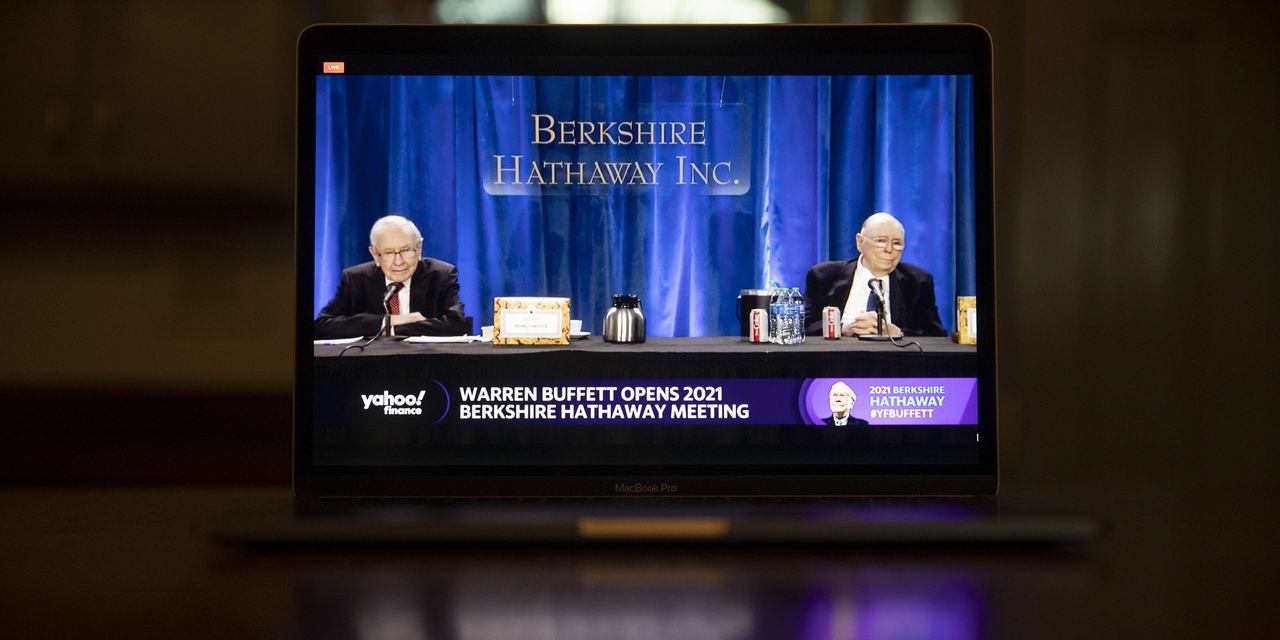 annual shareholders meeting returned to a live, in-person format for 2022, after a two-year pandemic hiatus moved the so-called “Woodstock for Capitalists” online. Warren Buffett addressed the company’s massive stock purchases in the first quarter, the performance of its collection of businesses, and added his signature folksy anecdotes and life advice.

Tens of thousands of Buffett devotees were back in Omaha, Nebraska to hear from the legendary investor and Berkshire Hathaway (ticker: BRK.A, BRK.B) CEO, scoop up discounts at a shareholder-only shopping day, and swap stories of their experiences following Berkshire over the years.

Buffett was happy to be back in person

The meeting began with a movie featuring highlights and advertisements from Berkshire’s numerous subsidiaries and equity investments — including Berkshire Hathaway Energy, Borsheims,

Flanked by Berkshire’s three vice chairmen — Munger, Greg Abel, and Ajit Jain — a jovial Buffett received a standing ovation and immediately began cracking jokes: “You do not hear that kind of welcome for the index funds,” he quipped. “The two of us are 190 years old,” Buffett added, referring to himself, 91, and Munger, 98.

Holding up a box of See’s Candies peanut brittle, Buffett spoke about Mary See, whose black-and-white image adorns See’s merchandise. She passed away in 1939. “A lot of people think this is me in drag, but that’s not true,” Buffett said. “There’s a resemblance, but these rumors are started by our competitors.”

Buffett continued with an overview of Berkshire’s first-quarter financial results, which were released on Saturday morning. Operating earnings after taxes rose less than 1% from the year-earlier period, to about $ 7 billion. The company reduced the pace of its stock buybacks, but Berkshire was active in purchasing other companies’ shares.

Berkshire spent $ 3.2 billion on share repurchases in the first quarter, and bought $ 51.9 billion in other equities. The company also sold $ 10.3 billion worth of non-Berkshire shares. Berkshire ended the period with $ 102.7 billion in cash and US Treasury bills.

“We will always have a lot of cash on hand,” Buffett said.

(PGR) has done better than Geico in terms of its profit margin and growth rate. He attributed that to the Berkshire subsidiary’s later entry into telematics, or usage-based insurance, which adjusts customers’ rates based on how they drive.

has years of additional data and experience in the business, but Jain said that Geico was seeing promising early results from its telematics policies, branded as DriveEasy.

Abel defended the approach of BNSF, which has not been able to embrace precision-scheduled railroading as much of the railroad industry has.

The first question of the meeting was about Berkshire quickly becoming more active in the stock market. In Buffett’s 2021 annual shareholder letter, dated Feb. 26, he wrote that there were few attractive opportunities out there. Since then, Berkshire struck a deal to acquire insurer

(Y) for $ 11.6 billion, and scooped up billions of dollars of shares of

Asked what changed, Munger said: “We found some things we preferred owning to Treasury bills.” Buffett added, “As usual, Charlie has given the full answer, but I’ll still talk more and say less.”

Buffett explained that Occidental’s capital-return plans and higher oil prices in the wake of Russia’s invasion of Ukraine made the stock a buy, and that Alleghany was a natural fit for Berkshire’s insurance operations.

stock in the first quarter. The company owned about 911 million shares of the iPhone maker at the end of March, versus 907.6 million at the end of 2021.

In February, Berkshire said it owned about 14.7 million shares of

(ATVI), which were acquired in October and November 2021. On Saturday, Buffett said that Berkshire now owns about 9.5% of Activision, or some 74 million shares — which were worth about $ 5.6 billion at Friday’s close.

(MSFT) has agreed to purchase the video-game developer for $ 95 per share, while shares have been trading in the high $ 70s and low $ 80s in recent months. Buffett expects the deal to go through — and for that gap to close.

Berkshire isn’t buying back as much stock

Berkshire spent $ 3.2 billion on share repurchases in the first quarter, down from $ 6.9 billion in the fourth quarter and $ 27 billion for all of 2021. Buffett and Munger repurchase shares when they determine that their price is below Berkshire’s intrinsic value.

Buffett nonetheless extolled the virtues of stock buybacks for shareholders, pointing out that Berkshire’s stake in

had grown to about 20%, from 11%, over the years — without Berkshire buying any additional stock.

“Imagine you owned a farm and had 640 acres, farmed it every year, made a little money on it, enjoyed farming, and somehow 20 years later it turned into 1,100 or 1,200 acres,” Buffett said. “If you do it at the right price, there’s nothing better than buying back part of your own business.”

Buffett believes that the best defense against inflation is to be skilled at what you do, and to produce a good or service that will remain in demand which people will be willing to pay for.

“The best protection against inflation is your own personal earning power. No one can take your talent away from you,” Buffett said. “If you do something valuable and good for society, it does not matter what the US dollar does.”

Buffett said that predicting future inflation is a fool’s game, and that no one can really know how much inflation there will be over the next 10 years, or 12 months, or four weeks. “Inflation swindles almost everybody,” Buffett said, whether they are a stock investor, a bond investor, or a “cash-under-the-mattress person.”

Buffett and Munger addressed what they called “gambling” in the stock market, including high-frequency trading, options strategies, and other speculative behavior. That can lead to short-term swings in prices that are buying opportunities for Berkshire, the Oracle of Omaha said. “Sometimes markets do crazy things,” Buffett said. “That’s good for Berkshire, not because we’re smart, but because we’re sane.”

(HOOD), investment bankers, active investment managers whose portfolios closely resemble broad market indices, and other Wall Street businesses. At Buffett’s insistence, Berkshire’s acquisition of Alleghany is for $ 848.02 per share — an odd price that was reduced, from $ 850 a share, by the “financial advisory fee” that the insurer owed its investment bank

The first question of the afternoon session had to do with companies engaging in the political realm — and whether they should take official stances on controversial issues.

“I do not put my citizenship in a blind trust when I take the job as CEO of Berkshire,” Buffett said. “But I’ve also learned that you can make a whole lot more people sustainably mad, than temporarily happy, on a variety of subjects.”

People who get upset may take it out on Berkshire’s subsidiaries and employees, Buffett noted, which is not fair to those workers. “I’ve come to the conclusion that the answer is ‘No,'” Buffett said.

Berkshire stock has climbed about 7% so far this year, versus a 13% decline for the

Write to Nicholas Jasinski at nicholas.jasinski@barrons.com

OMAHA, Neb. — The Berkshire Hathaway annual shareholders meeting returned to a live, in-person format for 2022, after a two-year pandemic hiatus moved the so-called “Woodstock for Capitalists” online. Warren Buffett addressed the company’s massive stock purchases in the first quarter, the performance of its collection of businesses, and added his signature folksy anecdotes and…

A dose of laughter: Here we bring you a list of popular comedians of all times