Over a thousand parents and learners brought the rural town of Mqanduli, near Mthatha to a standstill this week, blocking roads with burning tires and rocks. They are demanding that the Eastern Cape Department of Education rebuild two new schools – Phangindlela Junior Secondary and Holomisa Senior Secondary.

On Wednesday, protesters were scattered in groups across the town, burning tires and forcing vehicles to find alternative routes. We have seen video footage of Mthatha police using what is believed to be rubber bullets and stun grenades to disperse protesters.

Parents are accusing the department of breaking promises they claim were made since 2016 to demolish the existing, dilapidated schools and build new schools made of brick and mortar. They also claim that the delays are politically motivated as the schools are named after, and are in the hometown of, UDM leader Bantu Holomisa and Chief Patekile Holomisa.

When GroundUp visited the schools, classrooms were overcrowded with at least 80 learners in most of the rooms we saw. Learners were being taught under a tree because of the terrible state of some of the classes. Other issues include leaking and broken roofs, walls, flooring, windows and doors. The toilets for learners were also old and faulty. 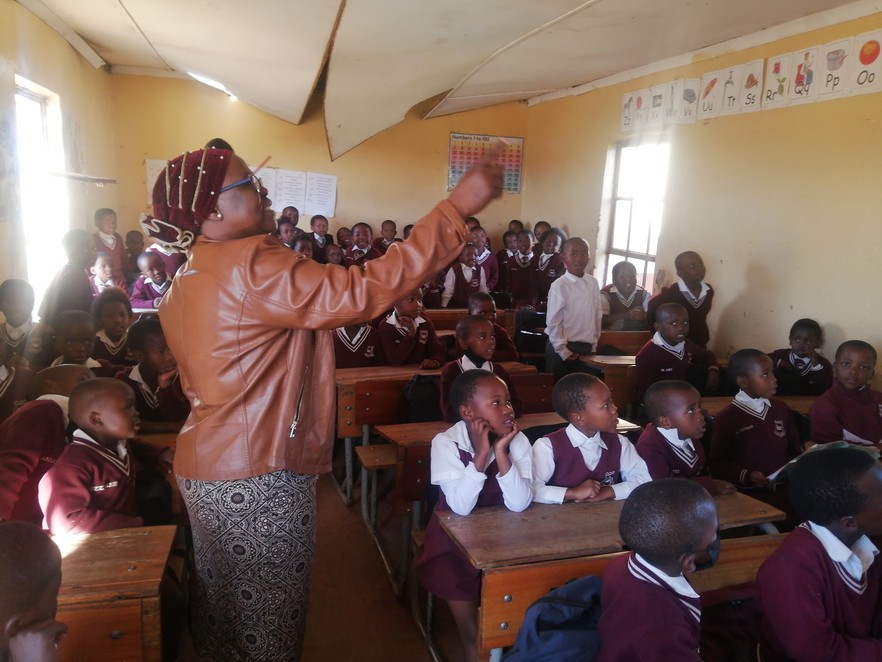 Mandisa Dlutu says teaching 112 grade 2 learners in an overcrowded and dilapidated mud classroom is not conducive to learning.

At Holomisa Senior Secondary, Principal Pumla Guqa said the school was built in 1972 with eight brick classrooms. Five additional prefabricated classes were given by the department and staff rooms were donated to the school, but these are weathered and falling apart now.

The school currently has 1,029 learners and 12 classrooms. It also still uses six pit toilets for girls, five for boys and two for staff.

Guqa said the Coega Development Trust visited the school with contractors in 2016. Land near Mqanduli Stadium was identified as the new school site, she said. She said a delegation of politicians again visited in 2020 and said nothing could be done due to the pandemic restrictions but promised the school more temporary classrooms until construction could start in 2022. To date nothing has been done, said Guqa.

She said that because there are not enough safe classrooms for learners, the school is still using the rotation system. “This is affecting our matriculants because learners only come twice a week. We also conduct classes under the trees to catch up with work. ” She said this was reflected in the matric pass rate which dropped from above 80% between 2016 and 2018 to 59% in 2019 and 69% in 2021.

Ongeziwe Mtirara, a 15-year-old grade 9 learner said, “We want to be at school everyday but we can not because we have no classrooms. Studying under the tree is also not nice. It’s cold and windy. On rainy days the chalk on the board washes away. Loud music from the taxi rank disturbs us. ” 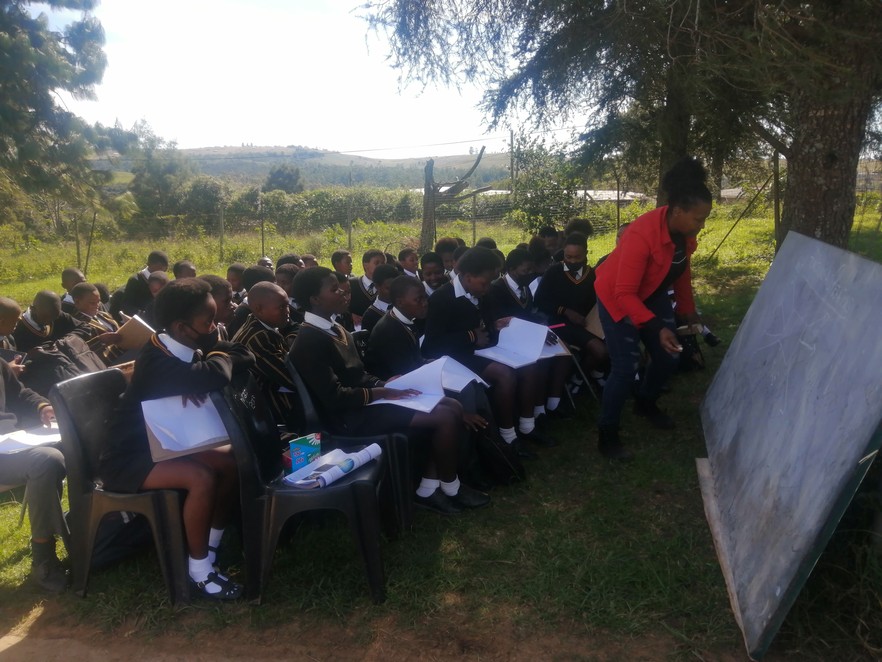 Amanda Gangca teaches learners under a tree due to a shortage of classrooms at Holomisa Senior Secondary School in Mqanduli.

At Phangindlela Junior Secondary, Principal Lungiswa Noah told GroundUp they too were promised a new school by the provincial department in 2016. She said a delegation of officials from the district, provincial education and infrastructure departments as well as Chief Patekile Holomisa visited the school and made the promise, but nothing has been done yet.

“All our classrooms are overcrowded. We have no fewer than 90 learners per class. Our mud school was built in 1935 by the community with 11 now crumbling classrooms. In grade 4 we have 126 learners in one classroom, grade 5 has 126 learners and in grade 8 there are 147 learners, ”she said.

“These conditions are not conducive to learning and teaching. Toilets are filthy. Learners relieve themselves on the floor and outside the toilets. ”

Mandisa Dlutu has been teaching at the school since 2002. “Our school is in crisis. The ceilings cave in while we teach. In 2003 I went around to ask for donations to build three more classrooms after our several attempts asking the department were fruitless, ”she said.

Dlutu said she is also no longer able to fulfill her duties as a music and sports educator due to work overload.

The parents and residents have given the department until next month to give them timeframes for when the schools will be built. Protesters say the department promised to respond to them on May 4 and deliver five additional prefabricated classrooms for Holomisa Senior Secondary.

The department’s Malibongwe Mtima is yet to answer our questions.