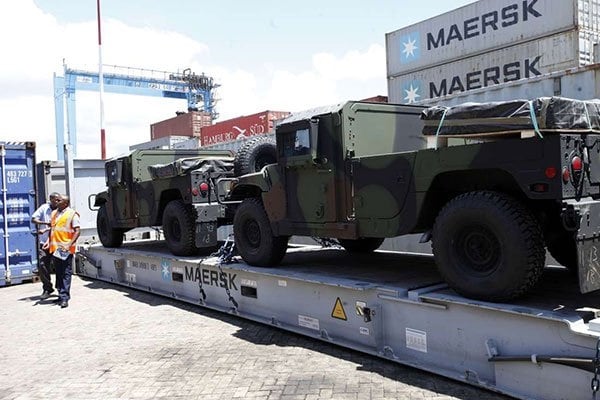 Kenya required more money to buy less military equipment such as guns and tanks last year due to the weakening of the shilling against the US dollar.

The think-tank says the country used Sh121.1 billion to acquire equipment worth $ 1.113 billion last year when the shilling lost three percent against the dollar.

In contrast, it bought more arms worth $ 1.115 billion using Sh118.7 billion in 2020, reflecting the impact of the weaker shilling on the cost of imported goods.

The shilling averaged Sh109.6 against the dollar last year compared to Sh106.4 a year earlier and now trades at Sh115.74 on increased demand for the greenback from importers following the full reopening of the economy, which has unleashed pent-up demand for both consumer and capital goods.

The currency woes add a new layer of factors that are curtailing Kenya’s military spending, which has dropped over the decade even as neighboring Uganda stepped up equipment purchase by 203 percent in a regional arms race.

“Between 2012 and 2021, military spending rose by 203 percent in Uganda but remained relatively stable in Kenya, down by 4.5 percent,” SIPRI said of trends in global military expenditure in 2021.

The dollar has been gaining against other currencies globally amid the Russia- Ukraine crisis as investors view the currency as a safe haven, indicating the pressure on the shilling.

The heightened demand for dollars has triggered shortages. This has forced industrialists to start seeking dollars in advance as the shortages put a strain on supplier relations and the ability to negotiate favorable prices in spot markets.

The shilling has weakened from Sh109.2 in January against the dollar to an average of Sh115.85 units on Thursday.

Reduced spending on military equipment looks set to ease Kenya’s grip in the region as Uganda catches up in arms purchases.

Ethiopia is the only other country that cut its dollar spending on arms to $ 487.8 million last year from $ 504.07 in 2020 despite waging a civil war against Tigray forces for two years.

President Uhuru Kenyatta’s administration has increased spending on the military since he came to power in 2013 save for the past two years.

Military spending often diverts money from urgent social needs in developing countries such as Kenya, which have high budget deficits.

Uganda has tripled military spending over the last five years to bridge the gap with Kenya. It spent $ 346.7 million in 2017 when Kenya splashed $ 1,015 on arms.

Widespread conflict and terrorism threat in East Africa has fueled an arms race in the region to combat the threat while launching interventionist wars across borders to insulate the stable countries.

In 2021 Kenya, Uganda and Angola were, respectively, the third, fourth and fifth largest military spenders in sub-Saharan Africa.

Kenya, Uganda and Rwanda have employed aggressive foreign policy within the region through interventionist maneuvers in their backyards and multilateral peace missions while building their military capacity.

Kenya sent troops to Somalia a decade ago to fight the Al-Shabab militant group before joining the African Union (AU) mission in Somalia (AMISOM) backing the Mogadishu government against the insurgents.

President Kenyatta ordered the KDF to send its Quick Reaction Force (QRF) to the DRC last year to help stabilize the region.

Rwanda has also been an active player sending troops into Mozambique’s troubled Cabo Delgado Province at the end of July 2021 to combat an Al-Shabaab offshoot, the Islamic State-Mozambique.

SIPRI is an independent international institute dedicated to research into conflict, armament, arms control, and disarmament.