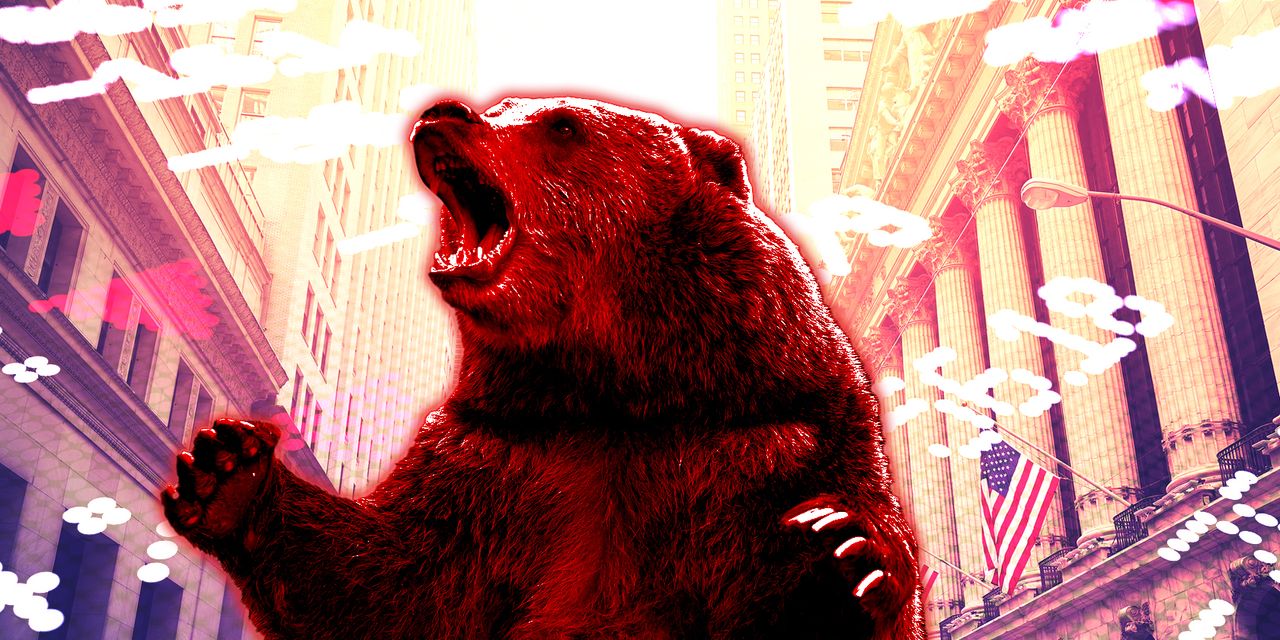 What a difference a day makes.

Fresh off the best percentage gain for the Dow Jones Industrial Average DJIA,

and the Nasdaq Composite COMP,
.

Not even US Treasurys were safe, with the 10-year Treasury note TMUBMUSD10Y,

climbing above 3% as prices fall.

Some experts attributed Wednesday’s rally to a statement by Federal Reserve Chairman Jerome Powell that a 75-basis-point increase was not being actively considered by policy makers at the central bank at upcoming meetings.

The remark came after the Fed on Wednesday delivered the first half-percentage-point interest-rate hike, as had been widely expected, since 2000, in the final months of President Bill Clinton’s second term.

The Fed has been hiking rates to combat a surge in inflation that materialized in the aftermath of the COVID-19 shutdowns and dislocations, and which has been exacerbated by bloody conflict in Ukraine following Russia’s invasion in late February.

Some industry watchers peg Thursday’s selloff partly to fears that inflation will continue to dog the economy in the US and elsewhere in the world.

Data on Thursday showed that the productivity of American workers and businesses sank at a 7.5% annual pace in the first quarter, marking the biggest drop since 1947, amid supply shortages and production bottlenecks.

“It was a setback for our Roaring 2020s scenario of a technology-led productivity growth boom offsetting the chronic shortage of labor,” according to Yardeni Research, a provider of global investment strategy founded by Ed Yardeni, a MarketWatch contributor.

Bassuk told MarketWatch that “investors are selling today on renewed concerns regarding the plethora of continued uncertainties.”

The AXS CEO pointed to tensions with China, Russia’s siege in Ukraine, as well as a mixed bag of corporate earnings and nagging concerns about COVID-19 hamstringing a more powerful recovery in parts of the world.

See: China-focused ETFs sink as Blinken reportedly plans to affirm that China is the main US rival

Recession fears and inflation worries have been the centerpiece of the current bout of bearishness on Wall Street. “There’s no doubt that inflation, rising rates and volatility will continue to characterize the market environment in [the second quarter] and beyond, ”Bassuk said.

“What’s really interesting about these markets is that there are these every-other-day changes in either direction where investors are outrageously bullish, or outrageously bearish the next day,” said Sylvia Jablonski, chief executive and chief investment officer at Defiance ETFs in New York.

Indeed, MarketWatch’s Bill Watts wrote that, with the exception of 2020, the S&P 500 has already topped or is on track to exceed annual totals of 2% -or-greater moves for each year stretching back to 2011.

Jablonski said there was still room for hope.

“Inflation may have peaked, growth may be slowing, but it is still positive. The consumer is still spending, [and] employment is at all-time highs, ”she said, going on to point to the up to $ 2 trillion in excess savings said to have been amassed during the pandemic.

Market Extra (July 2021): US wealth grew by $ 19 trillion during the pandemic – but mostly for the very rich

The volatile state of the market is stoking confusion about the outlook. Is this time to jump into stocks, or should investors wait for a better entry point? Or should we heed billionaire investor Paul Tudor Jones’s advice and stay clear of traditional altogether markets?

History suggests that you can not time the market and that, over a long period, the market wins. The big question is what’s your time frame what’s your tolerance for pain?

The slump in bonds, with yields rising as prices fall, is complicating matters for some investors. Treasurys, notably the benchmark 10-year US government bond TMUBMUSD10Y,
,
traditionally are seen as a refuge in times of uncertainty, but they also have been undone given the Fed’s current rate-hike plan, which has led to selling in bonds in the hope of richer yields to come.

And check out: Dollar soars as Bank of England’s grim economic forecast gives investors reason to sell off Treasurys, stocks