NET INFLOWS of foreign direct investment (FDI) slumped to its lowest in 10 months in March, as Russia’s invasion of Ukraine darkened the outlook for investments.

Data released by the Bangko Sentral ng Pilipinas (BSP) on Monday showed FDI net inflows dropped by 9.8% to $ 727 million in March from $ 806 million a year earlier.

This was the lowest monthly FDI inflow recorded since the $ 452 million seen in May 2021. 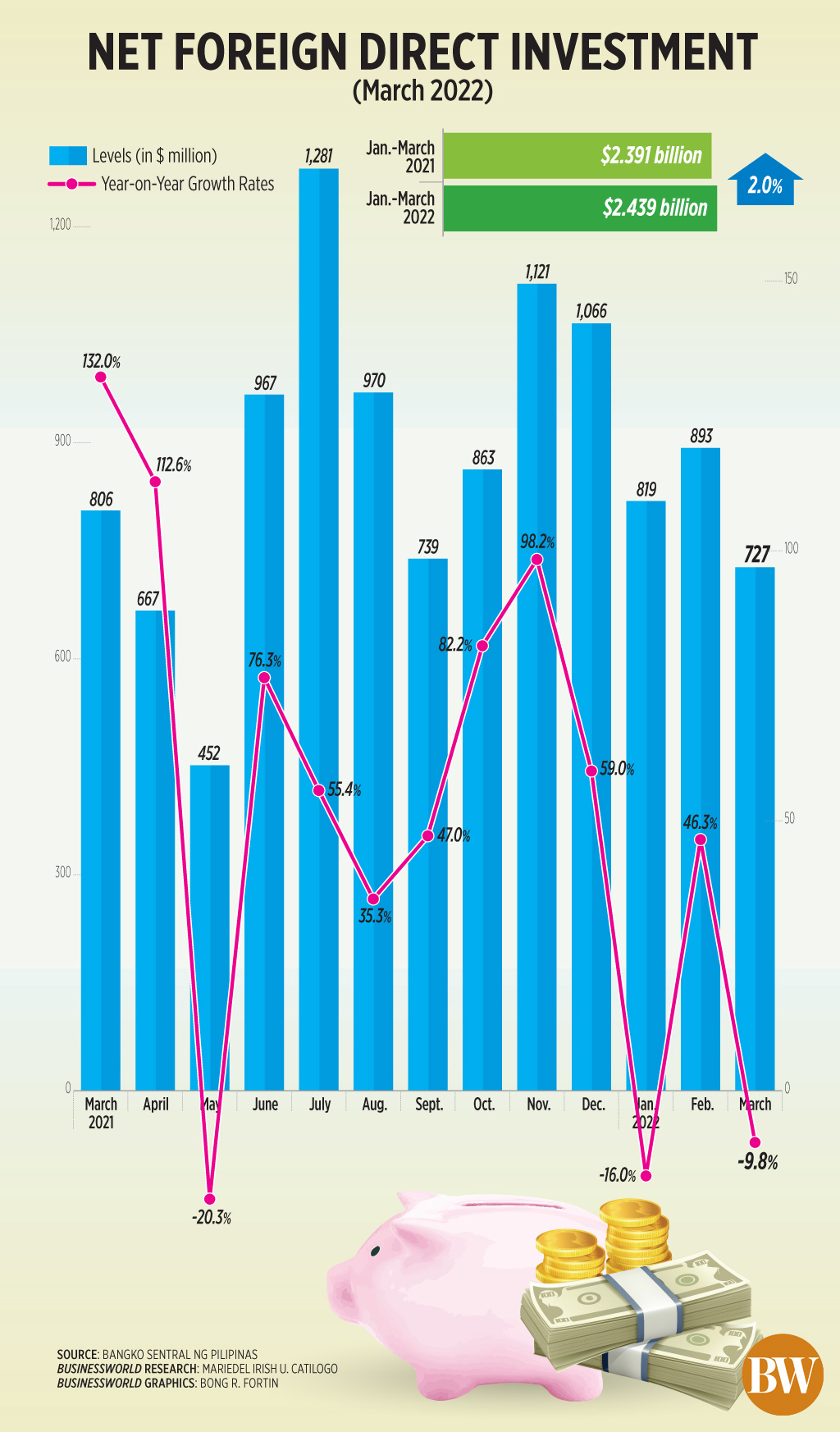 “While the country’s macroeconomic fundamentals remain sound, external risks, such as the impact of Russia’s invasion of Ukraine on commodities and financial market condition, the start of policy tightening in several major central banks and the resurgence of COVID-19 (coronavirus disease 2019) cases in many Asian economies, may have contributed to investors’ concern about the outlook on the global economic recovery, ”the BSP said in a statement.

Russia began its invasion of Ukraine on Feb. 24, sending shockwaves throughout the global economy. Oil and commodity prices soared, clouding the outlook for economic growth.

The US Federal Reserve raised its policy interest rate by 75 basis points since March, and is expected to continue policy tightening to cool inflation.

BSP data showed non-residents’ net investments in debt instruments of local affiliates jumped by 45% to $ 543 million in March, from $ 374 million a year ago.

Also, investments in equity and investment fund shares dropped by 57.3% in March to $ 184 million.

Non-residents’ net investments in equity capital (other than reinvestment of earnings) plunged by 69.6% to $ 106 million from $ 349 million in the same month last year. Equity capital placements fell by 68.7% to $ 118 million, while withdrawals dropped by 58.2% to $ 12 million.

The equity placements were mainly from Japan, the United States, and Singapore, and invested mostly in manufacturing, real estate, and financial and insurance industries.

Reinvestment of earnings slipped by 5.4% to $ 78 million year on year in March.

In the January to March period, foreign investments in debt instruments rose by 33.5% year on year to $ 1.9 billion.

Investments in equity and investment fund shares declined by 44.2% to $ 540 million in the first quarter.

Net foreign investments in equity capital dropped by 57.6% to $ 311 million. Equity capital placements dropped by 58.1% to $ 352 million, while withdrawals slid by 61.1% to $ 42 million. Most of these placements were from Japan, the United States, Kuwait, and Singapore.

Reinvestment of earnings dipped by 2.7% to $ 229 million in the first quarter.

Mr. Mapa noted most of the investments were in debt instruments, while “fresh” FDI equity placements declined, reflecting the “anxiety over the ongoing policy normalization efforts of major central banks and their likely implications on the financial sector and economy.”

“Going forward, we expect FDI to remain positive but overall equity placements and reinvestment of earnings may take a while longer to improve. Investors would likely want to gauge the health of the global economy and or how resilient domestic growth will be in the face of the triple threat of faster inflation, higher borrowing costs and record high debt, ”he said.

Ms. Velasquez said the economic outlook for the Philippines remains “bright” despite higher inflation and the BSP’s policy tightening. She noted the incoming administration’s infrastructure plans and the implementation of structural reforms will help attract more investments.

“In 2022 and 2023, the Philippines is expected to be one of the leaders in the growth story of Asia and thus, this will likely lead to an overall increase in net FDI for the year,” she said.

The central bank projects FDI not inflows will reach $ 11 billion this year. – Keisha B. Ta-asan