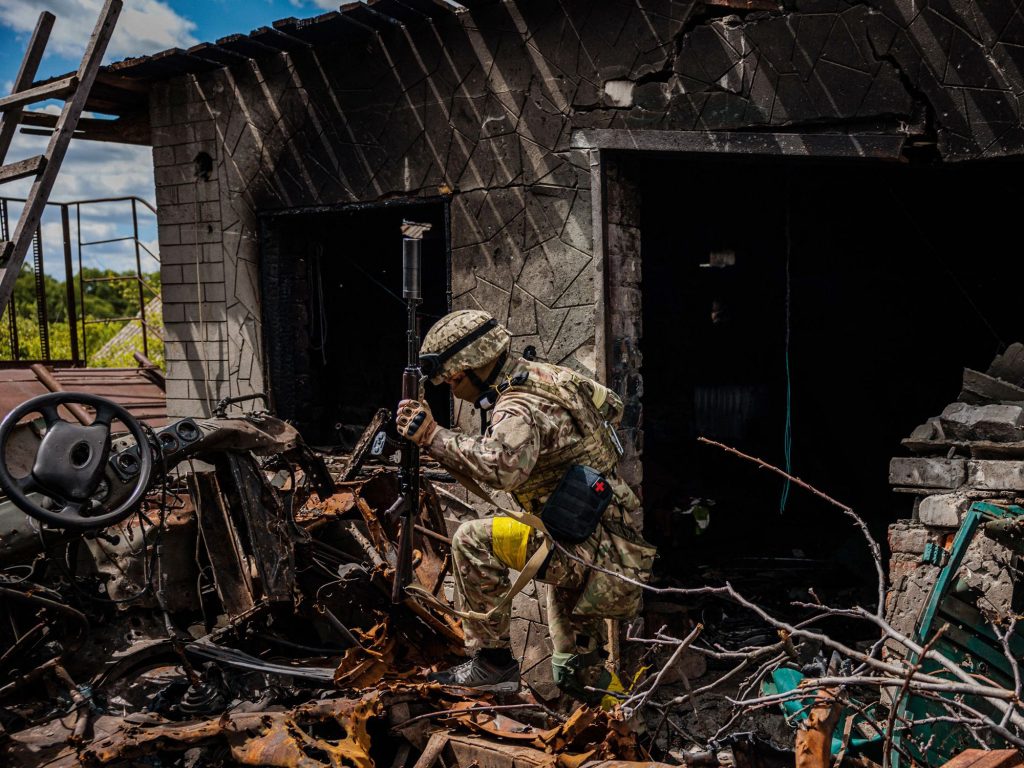 Ukraine’s top military commander said Russian troops have focused shelling on the north of the Luhansk region and pleaded with his US counterpart to send more artillery.

Wolfgang Buechner, a German government spokesman, said earlier Monday at a regular news conference that there is no new information about a possible Scholz trip to Ukraine. The European Commission is expected to recommend on Friday that Ukraine be granted candidate status to join the EU, though the complicated accession process may take decades to complete and the move is seen as more of a symbolic gesture than a fast track to actual membership.

Macron Calls for Review of French Military Budget (12:12 pm)
On the campaign trail for legislative elections next Sunday, Macron said he would ask for a review of French military spending on the back of the war in Ukraine. As a candidate earlier this year, he pledged to boost the defense budget.

Ukraine’s June Rate Hike May Be Last Needed (11:40 am)
The Ukrainian central bank may not need to increase borrowing costs further after it more than doubled its key interest rate to 25% earlier this month, according to minutes released Monday.

The National Bank’s monetary policy committee members voted 7-3 on June 2 to raise the key rate 15 percentage points to the highest level in Europe, while agreeing the country’s economy is not ready to return to a floating hryvnia exchange rate.

Even as uncertainty over the war may require the central bank to remain open to further policy tightening, some members said in the longer term the key rate may need to be cut rapidly if there is an influx of international financial support.

Russia has been gaining ground in eastern Ukraine, using its better-supplied military to bombard positions in some of the war’s most intense fighting to date. Kyiv’s appeals to its western partners for weapons have become more urgent in recent days.

“Very fierce fighting is going on, literally for every meter,” Zelenskiy said in his nightly video address.

About 500 civilians, including 40 children, remain trapped in bomb shelters at the Azot chemical plant in the city, regional governor Serhiy Haiday said. The plant was shelled three times over the last day, he wrote on his Telegram channel.

Hundreds Killed by Russian Shelling in Kharkiv, Amnesty Says (7:46 am)
Hundreds of civilians in Kharkiv have been killed by Russian shelling and rocket attacks that constitute war crimes, Amnesty International said in a report that detailed numerous strikes.

“The people of Kharkiv have faced a relentless barrage of indiscriminate attacks in recent months,” said Donatella Rovera, Amnesty International’s Senior Crisis Response Adviser. “The Russian forces responsible for these horrific attacks must be held accountable.”

A local medical official told Amnesty 606 civilians had been killed and 1,248 injured in the Kharkiv region since the war began.

IAEA, Ukraine Restore Safeguard Data Link (12:01 am)
The International Atomic Energy Agency and the Ukrainian operator of the Zaporizhzhya Nuclear Power Plant have restored a remote transmission system for safeguarding data sent to the United Nations atomic watchdog. That process had been halted for nearly two weeks due to technical problems, the IAEA said.

IAEA Director General Rafael Mariano Grossi welcomed the step as a positive for safety but said in a statement the agency’s inspectors must still go to the facility as soon as possible for essential nuclear material verification activities that can not be done remotely.

Russia seized the Zaporizhzhya nuclear plant – Europe’s biggest such facility – in the early days of the war and has maintained control ever since. It has also demanded that Ukraine begin paying for electricity generated at the occupied atomic plant.

Ukraine Pleads With US for Artillery (8:00 pm)
The Commander-in-Chief of Ukraine’s military, Valeriy Zaluzhnyi, said on Facebook that he asked General Mark Milley, chairman of the US Joint Chiefs of Staff “to help us get more 155 mm caliber artillery systems in the shortest possible time.”

Russia has deployed as many as seven battalion tactical groups in the assault on the city of Sievierodonetsk and its forces have resumed shelling residential areas of Kharkiv, Ukraine’s second-biggest city, Zaluzhnyi said. The front line stretches across 2,450 kilometers (1,530 miles) of Ukrainian territory, with active hostilities along 1,105 kilometers, he said.