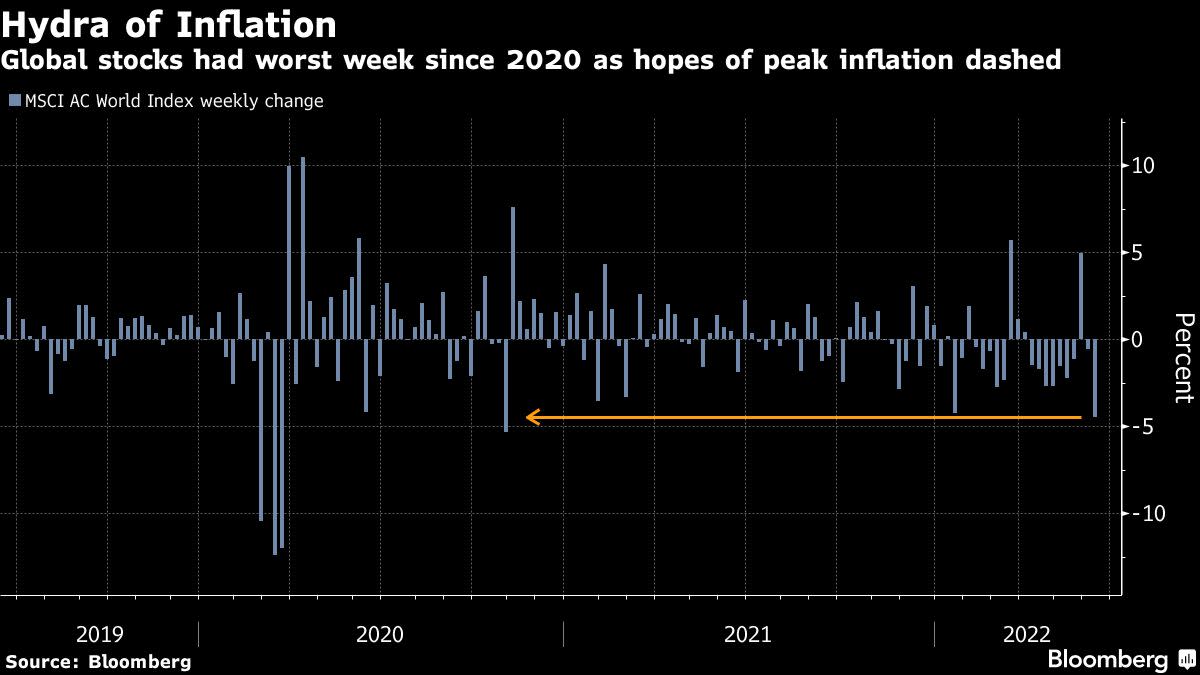 Equities shed about 2% in Japan and South Korea. US equity futures slid, with Nasdaq 100 contracts down 2% and those for the S&P 500 1.3% lower. The declines come in the wake of steep losses on Wall Street that contributed to the worst drop in global shares last week since October 2020.

The yen weakened to 135 per dollar, putting a 24-year low in sight.

Shorter-dated Treasury yields surged, with the two-year maturity rising eight basis points. New Zealand’s 10-year bond yield topped 4% for the first time since 2014 in the slipstream of a Treasuries. Yields on 30-year Treasuries are below those on five-year notes, pointing to fears that sharp Fed interest-rate hikes will spark a hard economic landing.

The dollar was firm on haven demand amid the toxic mix of rising costs and slower growth. Risk sensitive currencies like the Australian dollar weakened. Oil, one of the commodities stoking price gains, retreated below $ 120 a barrel. Gold, meanwhile, rose as investors sought a hedge against high US inflation.

Markets are also contending with Covid outbreaks in China, where Beijing and Shanghai resumed mass virus testing. The fear is China’s Covid-zero strategy will lead to repeated lockdowns that damage both its economy and global supply chains. The latter are also being affected by the war in Ukraine.

“At some point financial conditions will tighten enough and / or growth will weaken enough such that the Fed can pause from hiking,” Goldman Sachs Group Inc. strategists including Zach Pandl wrote in a note. “But we still seem far from that point, which suggests upside risks to bond yields, ongoing pressure on risky assets, and likely broad US dollar strength for now.”

The US consumer price index rose 8.6% in May from a year earlier – a fresh 40-year high – in a broad-based advance, adding to a slate of troubling inflation data globally. Many investors expect half-point Fed rate hikes this week and again in July and September. Barclays Plc and Jefferies LLC said an even bigger 75-basis-point move is possible at the June meeting.

The volatility in Treasuries “can not be anything that any central bank would welcome,” Sonal Desai, Franklin Templeton’s fixed income chief investment officer, said on Bloomberg Television. “We’re going to see more of the same. It’s not going to be a nice, smooth grind upwards. The Fed is going to need to do more. ”

The yen’s slide against the greenback reflects the stark policy contrast between a hawkish Fed and a still dovish Bank of Japan. Senior Japanese officials delivered a ramped-up warning on the yen Friday, seeking to keep a floor under the currency.

“The yen is, sooner rather than later, going to come under renewed selling pressure” if the Bank of Japan does not change its policy, Rob Carnell, chief economist and head of Asia-Pacific research at ING Groep NV in Singapore, said on Bloomberg Television on Monday. “I think it’s a question of when rather than if with them, exactly what kind of nuance they put into play with the yield curve control.”

Poor sentiment was evident over the weekend in a cryptocurrency slide that took Bitcoin as low as $ 26,877, the weakest since mid-May.

In Australia, financial markets are closed for a holiday.

What to watch this week: