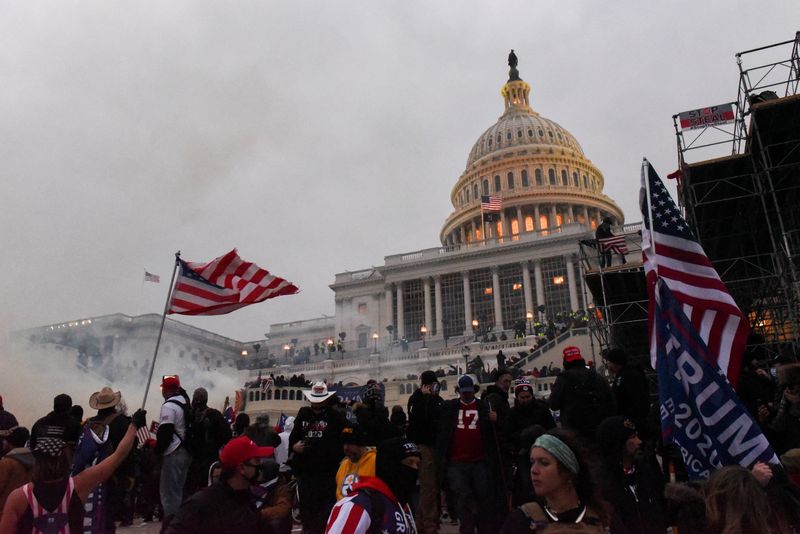 © Reuters. FILE PHOTO: Police clear the US Capitol Building with tear gas as supporters of US President Donald Trump gather outside, in Washington, US January 6, 2021. REUTERS / Stephanie Keith / File Photo

WASHINGTON (Reuters) – Former President Donald Trump’s campaign manager and former officials from Atlanta and Philadelphia will testify on Monday to the US congressional committee investigating the Jan. 6, 2021, attack on the Capitol, the committee said on Sunday.

The House of Representatives Select Committee will hold its second public hearing this month on Monday starting at 10 am EDT (1400 GMT), after a blockbuster session on Thursday night featuring testimony showing that close Trump allies – even his daughter Ivanka – rejected his false claims of voting fraud.

Monday’s hearing, the second of an expected six, will focus on the former Republican president’s contention that his defeat by Democrat Joe Biden in the November 2020 election was due to unfounded allegations of election fraud, the so-called “Big Lie.”

The first panel of witnesses will include William Stepien, who served as campaign manager for Trump’s 2020 campaign, after serving as Trump’s White House Director of Political Affairs from 2017 to 2018.

A committee aide, speaking on condition of anonymity to preview the hearing, declined to comment on whether Stepien was expected to be a confrontational witness.

Also testifying at the first panel will be Chris Stirewalt, a former political editor of Fox News. Stirewalt came under fire from Trump and his supporters after the Fox News political desk was the first to call Arizona for Biden in November 2020.

Fox has denied that his departure had anything to do with that call.

The second panel will include conservative Republican election attorney Ben Ginsberg; Byung J. Pak, who resigned as a U.S. attorney in Atlanta as Trump’s camp sought to overturn Georgia’s election results, and Al Schmidt, who was the only Republican on Philadelphia’s election board and became a target of attacks by Trump after he defended the integrity of the 2020 presidential vote.

Georgia and Pennsylvania were among states that backed Trump in the 2016 election, but fell into Biden’s column in 2020. They have been a focus of the unfounded assertions of election fraud.

The committee aide said the hearing also will feature testimony recorded from the more than 1,000 depositions and interviews conducted during the nine-member Democratic-led Select Committee’s nearly one-year-long investigation of the events before and during the attack on the Capitol.