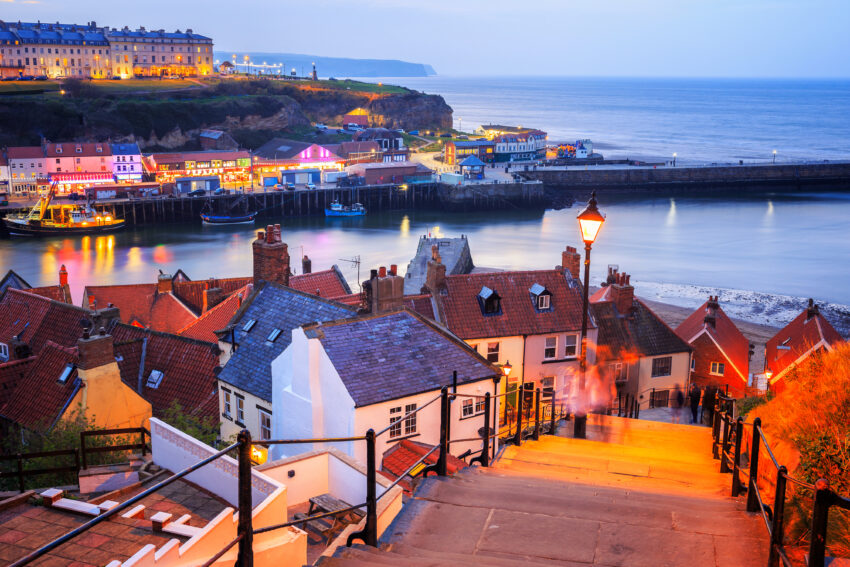 Furious locals won a landslide victory last night in the first round of a campaign to purge a seaside town of second home and holiday cottage owners.

Local businesses cannot get staff because the area is too expensive to attract new people while existing residents are forced to buy elsewhere.
Campaigner and local politician Philip Trumper said: ‘What we are finding is Whitby house prices are unaffordable to local people and they are having to leave the town and move away to work, making it unsustainable for the community.

‘Every day I speak to local people whose loved ones have had to move away and find a job closer to where they are living.’

On Thursday teatime and into the evening, locals were out in force to deliver a devastating protest vote at the first local referendum in more than a decade.

Queues built up outside the main poling station – scotching forecasts by town hall bureaucrats of a ‘low turnout’.

Residents were asked to answer ‘Yes’ or ‘No’ to the question: ‘Should all new build and additional housing in Whitby Parish be restricted to full time local occupation as a primary residence only and forever (in perpetuity)?’

Local secondary teacher Tricia Kelly, 61, said: ‘I moved to Whitby five years ago and in my street almost every single house is a holiday home. But worse than that it is all big organizations.

‘Companies are buying them and that is what people are upset and concerned about. We have just started a little community shop.

‘We have started to have more of a sense of community since Covid I guess. It has united people and they are thinking Whitby does not want to go the same way Cornwall and other places have gone.

‘This is just a way of galvanizing our thoughts about it. I was and bred around here. I may not be from Whitby but I am a Yorkshire girl. ‘

Another concerned resident, self employed Peter Mitchell, 65, said: ‘There is a lot of bad feeling in town about the number of holiday homes.

‘I have lived here all my life and the town is going downhill rapidly. Parking is a problem. House prices are going through the roof and local kids cannot afford them.

‘We have not got enough facilities in the town to cover the growth. We have one dentist, one doctor and a hospital which has been cut by 75 per cent.

‘I hope this poll achieves something and it is not just brushed under the carpet.’

A steady stream of voters turned up to cast their votes at the half dozen polling stations dotted around port in venues including a local library, pub and school.

The busiest polling station at Whitby Leisure saw long queues from when the polls opened at 4pm on Monday.

One electoral official said: ‘It has been heaving. There were queues out the door. There have been 40 to 50 in the queue and has been since the polls opened.

‘It has been a much higher turn out than expected for what is normally a little parish poll. It’s obviously a very emotional topic for his locals. ‘

Gillian Watmugh, 53, said: ‘On my street alone there are at least 17 second holiday homes – about half the 40 houses on the street. House prices are sky high.

‘My daughter was born and bred in Whitby and had to go to Middlesbrough to buy a house. She works at James Cook Hospital as an HCA.

‘They could not afford to buy here anyway. I can not afford to move, even though I own my own house, because they are too expensive.

‘I have lived here all my life. Where I live by the railway used to be all first time buyers. Now they are all second homes.

Highlighting the anger of some locals, Andrea Tyreman, 52, exited the polls, storming: ‘Second home owners should be burned out.

‘I have lived in Whitby all my life. We live on a street with about 40 houses and there are six of us left. The rest are full of Southerners.

‘After Covid people decided they were going to buy properties here. Something needs to be done. ‘

Wendy Townsend, also 60, said: ‘We live on Park Terrace and at the bottom end there are only about nine houses – and we have got five holiday lets.

‘We have been living next to an air b & b for the last three years. It causes a whole amount of problems with parking, with people parking on the pavement.

‘It has gone up £ 100,000 in a year. It has been done up from top to bottom and now instead of number 25 it is called Ebb Tide because they have always got to give them a name.

‘We have lived in our house 40 years and this is damaging our community. There is a lady two doors from us who has lived for two years without any real neighbors. ‘

Her husband Colin Townsend, 60, added: ‘We have complained about the parking but the police push you onto the council and you go around and around in circles.

It used to all first time buyers down here, like it was for us. Now, no one local can afford them. It’s absolutely ridiculous.

‘I would just stop any more housing becoming holiday homes. Every single time a house gets sold who ever is buying it says it is for themselves.

‘But you know it’s not. As soon as they’ve bought it we know very well it’s going to be a holiday home. There has got to be a way of policing it.

‘There needs to be something in writing to stop them being sold as holiday homes. There is enough in town as it. We do not need any more.

‘During Jubilee weekend, we had a family of four next door with two dogs and they left the dogs in while they went out.

‘The dogs were just howling and barking because they were in a strange place.’

Ian Gray, also 60, said: ‘I am surrounded on all sides by holiday homes. My road is Fishburn Park but they should change the name to Fishburn Holiday Park.The people who come are just ignorant. As far as they are concerned it is’ We’re here. We’re on holiday. S * d you lot ‘.

‘They seem to think they can just do what they want, and park where they want, rather than be discreet and quiet.’