Home
»
World News
»
Ahmed Al Sayegh: The commercial partnership between the United Arab Emirates and the United Kingdom is a model 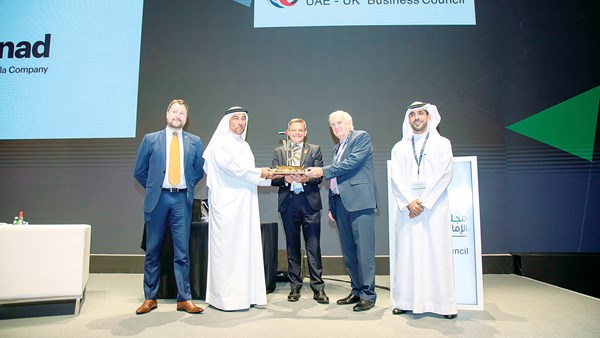 His Excellency Ahmed bin Ali Mohammed Al Sayegh, Prime Minister and President of the Abu Dhabi Global Market, emphasized the depth of the historic relations and trade and investment partnership between the United Arab Emirates and the United Kingdom, adding that relations between the two countries are a model for international cooperation.
This came in his speech during “UK Day” as part of the activities on the fourth weekday of the World Industrial and Manufacturing Summit 2021.
His Excellency Ahmed Al Sayegh discussed the sectors in which the two countries can work together to achieve a tangible impact on efforts to meet the challenges of climate change, saying: “The construction sector contributes almost 40% of harmful CO2 emissions, therefore it is necessary to adopt green The United Arab Emirates is also a key country in the aviation sector, and it has shown a joint commitment with the UK to reduce CO2 emissions in the commercial aviation sector, and the co-operation between the UK Rolls-Royce and the United Arab Emirates Sanad is an exemplary model of the benefits of this joint cooperation. “

business opportunities
In turn, Lord Edward Lister, chairman of the British Emirates’ Works Council, told the British side that his country was the basis of the first industrial revolution of the 18th century, and today it – together with its global partners – is leading the fourth industrial revolution.
Lord Lister praised the level of existing partnerships and business opportunities between companies in the two countries, the most important of which is the strategic cooperation agreement in the field of sustainability recently signed between Abu Dhabi National Oil Company (ADNOC), Abu Dhabi Future Energy Company “Masdar” and “BP” to develop two centers of pure hydrogen in each country. The United Arab Emirates and the United Kingdom have a production capacity of 2 gigawatts, adding that the two countries are on the verge of many new partnerships in the field of sustainability in the aviation sector and cooperation in the field of innovation centers.
Lord Lister concluded by greeting the Emirates on the fiftieth anniversary of the formation of the Federation and said: “The achievements so far are wonderful and very inspiring, and I am convinced that the next fifty years will be very special and full of exceptional achievements.”

Climate change
Simon Penny, the Consul General of the United Kingdom in Dubai and the Northern Regions and the Trade Commissioner for the United Kingdom in the Middle East, delivered a speech emphasizing the need for governments and the private sector to work together to achieve the climate-neutral goals they have committed themselves to. , adding: “By hosting the next session From the Conference of the Parties to the United Nations Framework Convention on Climate Change (COP28), the United Arab Emirates has demonstrated global leadership and leadership in confronting climate change at the level of oil-producing countries as well as globally.”

Sanad and Rolls Royce
The UK Day activities witnessed a celebration in honor of the 10th anniversary of the partnership between British Rolls-Royce and Sanad Group, owned by Mubadala Investment Company, which specializes in aeronautics, financing solutions and aircraft engine leasing. .
The speeches focused on the importance of the partnership between the two sides, especially when it comes to developing and adopting environmentally friendly solutions in the aviation industry. Mansour Janahi, Executive Vice President of Sanad Group, said: “Over the past decade, Sanad and Rolls-Royce have collaborated to develop the air transport sector, and the partnership between them represented a model for cooperation between the two countries, as we achieved 4.4 billion dirhams in revenue, earned more than 50 airlines and created more than 100 jobs. “