As Colombia enters its second month of violent repression, at least 10 people were killed in Cali on a day of anti-government protests, officials said Saturday.

President Ivan Duque announced Friday that he is sending troops to Cali as the country makes up a full month of Colombian rallies, which has turned into a massive anti-establishment mobilization.

Cali’s security minister, Carlos Rojas, told Caracol radio that “ten people” had died, “these are the complications we have this morning” in the events surrounding Friday’s protests. Eight of the 10 were shot dead, police said.

He spoke after reports of heavy street clashes. In one case, a representative of the Cali Attorney’s Office said an off-duty inspector shot at a crowd and killed a civilian before being lynched by protesters.

The video shows a man lying in a pool of blood and another holding a gun nearby. The man was then attacked by a group of people.

“In the south of the city, we had a real scene of confrontation and almost an urban war in which many people not only lost their lives, but we also had a significant number of wounded,” Rojas said.

After chairing a security meeting in the city, Duke announced on Friday that “maximum military assistance to the National Police” would begin immediately.

The situation in the city of 2.2 million people is “very serious”, Human Rights Watch, which had previously put the death toll above official figures, said.

Jose Miguel Vivanco, executive director of the Legal Group for the Americas, called on Doko to take “immediate steps to de-escalate tensions, including specific instructions by the US government to ban the use of firearms.”

Analysts blame the government’s militarized history for responding to the protests.

For more than 50 years, Colombia’s war against FARC left-wing guerrillas overshadowed other government priorities, while the government was heavily militarized by the war but weak in social compensation. 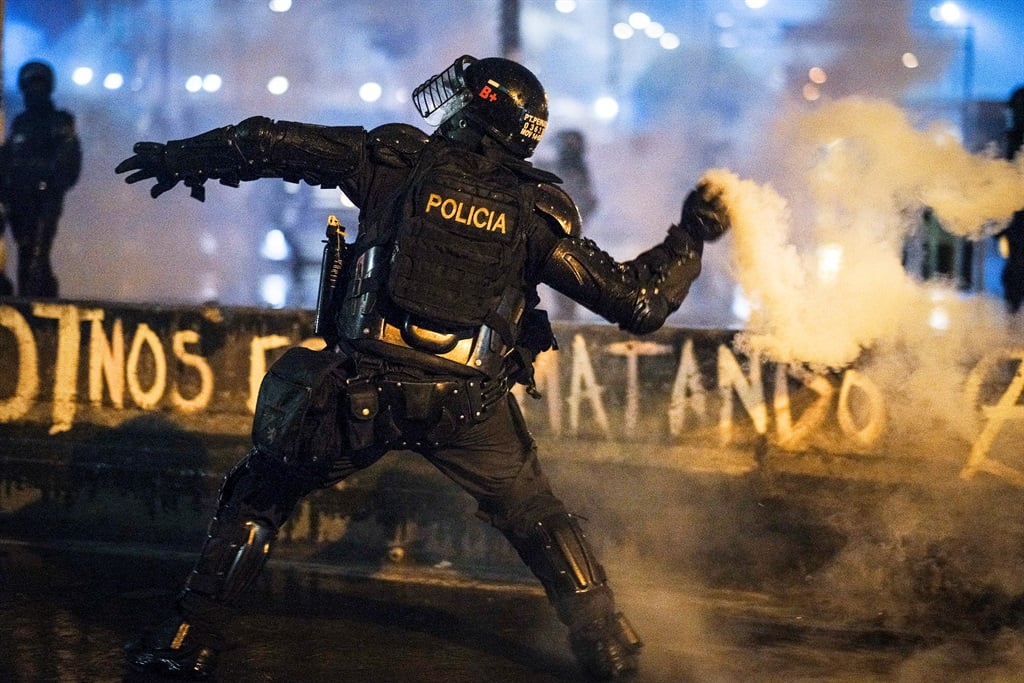 Bogota, Colombia – May 28: An ESMA member hurled tear gas grenades at protesters on May 28, 2021 in Bogota, Colombia. Protests against Ivan Dux’s government have not stopped since the April 28 eruption of a tax bill that was later withdrawn. The demand turned its focus into a widespread outcry over poverty, inequality, widespread mismanagement and police brutality. The national government and the strike committee are continuing negotiations to find a solution to the crisis. (Photo by Ovidio Gonzalez / Getty Images)

In 2019, a year after Duque came to power, students took to the streets demanding free and more accessible public education, better jobs and a supportive government.

The outbreak of coronavirus ended the devastation without Duque being forced to make major concessions.

But on April 28, anger over tax increases for the middle class pushed people back into the streets.

Although the proposal was quickly withdrawn, it sparked widespread anti-government mobilization by people who felt left out of the health crisis and became increasingly angry at the heavy response from security forces.

Often peaceful protests during the day have often turned into riots at night and fighting with the armed forces.

Protesters have set fire to barricades across the country, blocking dozens of major roads and causing shortages of many products.

Colombia, meanwhile, continues to see a record number of coronavirus infections and hospitals are collapsing.

Want to know more about this topic? Sign up for one of the 33 News24 newsletters To get the information you want in your inbox. Special newsletters are available to subscribers.