Home
»
Sports
»
At a meeting in Fawad Chaudhry’s house, a ceasefire was reached between Shoaib Akhtar and Nauman Niaz 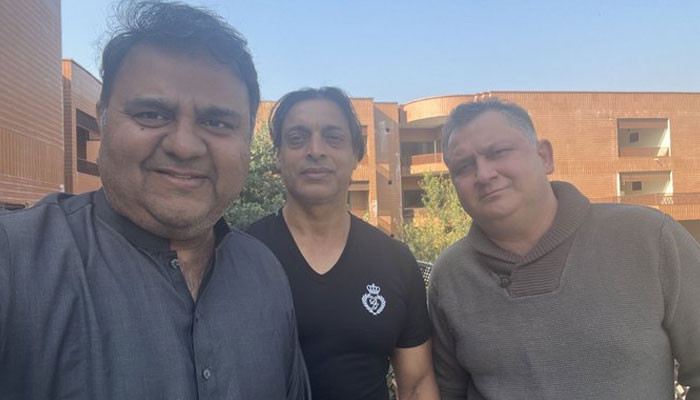 ISLAMA BATH: A ceasefire has been reached between former Pakistani fast bowler Shoaib Akhtar and PTV Sport anchor Dr. Nauman Niaz, during a meeting at the residence of the Minister of Information and Radio, Fawad Chaudhry.

Akhtar’s “insult” on the state-owned TV channel last month had sparked anger among cricket fans. The TV host had asked the cricket star to leave his show in the presence of cricket legends like Sir Viv Richards and David Gower.

A meeting was arranged between Akhtar and Dr. Niaz in Chaudhry’s residence, where disagreements between the two sides were settled.

While apologizing to Akhtar, Dr. admitted Niaz that what had happened in the live show should not have happened. He said their 30-year friendship should not end.

Senior Geo news anchor and political analyst Saleem Safi had taken Akhtar to Chaudhry’s home, whereas Dr Niaz had been called over to the residence by the information minister himself.

Chaudhry shared a photo of himself on Twitter with Akhtar and Dr. Niaz and wrote: “Everything is good, it ends well.”

Tweeting after the meeting, Akhtar said it was an “unpleasant incident” unfolding on national television, one that hurt his feelings, which is why it took him a while to get around.

“On a higher moral basis, I accept the apology from Dr. Nauman Niaz. Let’s move on from this,” he said.

On November 5, after strong backlash from Pakistanis, Dr. apologized Niaz finally to Akhtar for the verbal quarrel.

In the middle of a call to fire Dr. Niaz was investigated, after which he was taken out of the air by the PTV management.

In a statement on Rauf Klasra’s YouTube channel, the anchor said that the reaction to what he did in the air was justified, and “I apologize thousands of times for my behavior”.

“Whatever the reason, I did not have the right to do all this in the air, it was my fault. Shoaib Akhtar is a star and I love his cricket,” said Dr Niaz.