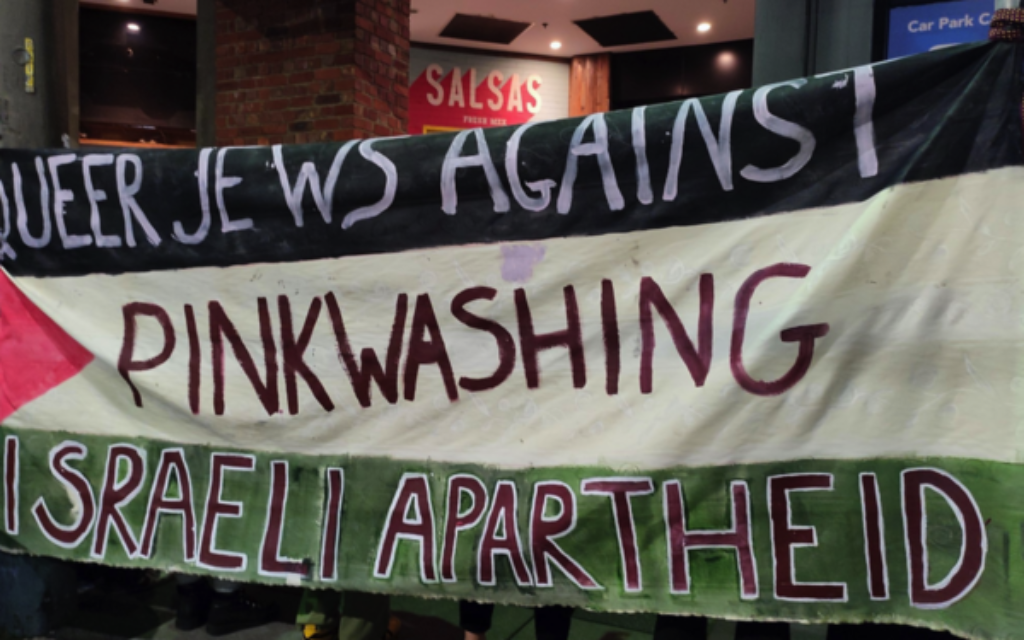 BOYKOTT, withdrawal and sanctions (BDS) supporters, many of them Jewish, took to Chapel Street on Friday night to protest the screening of the Israeli film. Swimmer at the Melbourne Queer Film Festival (MQFF).

The group of more than 50 activists at the Jam Factory waved Palestinian flags and placards that read “Not proud of apartheid” and “Queer Jews against Israeli apartheid”.

The police prevented the demonstrators from entering the cinemas, chanting “From the river to the sea, Palestine will be free”.

Swimmer focuses on homophobia in elite sport and has nothing to do with the Israeli-Palestinian conflict.

Film spectator Noa Shagan, who describes herself as LGBTQI+ and Israeli, described the protest as “disappointing and discouraging. AJN“The Jewish queer community doesn’t want to silence the voices of LGBTQI+ Palestinians, so why are you trying to suppress the voices of your Jewish colleagues who just want to celebrate LGBTQI+ stories?”

By watching the film, protest organizers accused MQFF of “washing pink”, which they described as “a deliberate strategy used to divert international attention from the gross violations of Palestinian human rights and international violations”, claiming that MQFF was “accomplice in torture”. . law”.

While Israel is seen as having a thriving LGBTQI+ scene, many members of the LGBTQI+ community in the Middle East face oppression and persecution.

MQFF co-director David Micallef said: AJN He said one of the most important aspects of their decision-making process is “not to discriminate against artists based on their ethnicity, cultural identity or country of origin”.

“Reaction to scan Swimmer It has not changed this core value in our organization.”

Michael Barnett of the Jewish LGBTQI+ advocacy group Aleph Melbourne said: AJN Although the organization does not take any stance on Middle East politics, he stated that he stands in solidarity with all LGBTQI+ people “no matter where they live, whether they are subject to oppression due to religious ideology or state-imposed intolerance”.

Recalling that Aleph Melbourne had previously walked “hand in hand” with the Arab and Lebanese gay union at the Pride Parade, “We support more storytelling, not less, and we certainly don’t support censorship of any of them, as this is just the beginning of a slippery slope.”

Dvir Abramovich, chairman of the Anti-Defamation Commission, said: “Ask yourself, when was the last time you saw a Gay Pride Parade in the West Bank or Gaza? The treatment of gays, women and ethnic minorities in Israel is a thousand times better than any other country in the Middle East or the Palestinian Authority and Hamas.”