Prime Minister Naftali Bennett said on Friday that Israel is in the midst of an emergency, after the first case of a new, highly mutated variant of the corona virus that first appeared in South Africa was discovered in Israel.

“Our overriding principle at the moment is to take swift and vigorous action, now, especially when it comes to entering and leaving Israel, until the situation becomes clearer,” Bennett said at a meeting with Health Minister Nitzan Horowitz and experts.

“When it does, we will decide what to do,” he added.

“We are currently on the threshold of an emergency. I ask everyone to be prepared and to participate fully in the work around the clock,” Bennett told meeting participants in comments released to the media by the Prime Minister’s Office.

“The new variant is more contagious, at a much faster rate than the Delta strain,” Bennett said, adding that authorities are following data from South Africa to learn more about it, including whether it is resistant to existing vaccines.

During the meeting, Ministry of Health officials asked Bennett to impose new restrictions on all arrivals to Israel, which requires them to take an additional covid test on the third day of their stay in the country, according to Walla’s news site.

The first case of the strain, currently known by its scientific name B.1.1.529, was discovered in Israel after a person arrived from Malawi, the Ministry of Health announced earlier on Friday.

The ministry said two others were suspected of also being infected with the new strain and were awaiting final test results. All three were vaccinated, the ministry said, adding that their inoculation details were still being verified.

Hebrew media reports that a woman suspected of being infected with the variant took a bus from central Israel to the southern city of Eilat, where she works at a hotel. The police found her there and sent her for further testing and interrogation by medical officials. 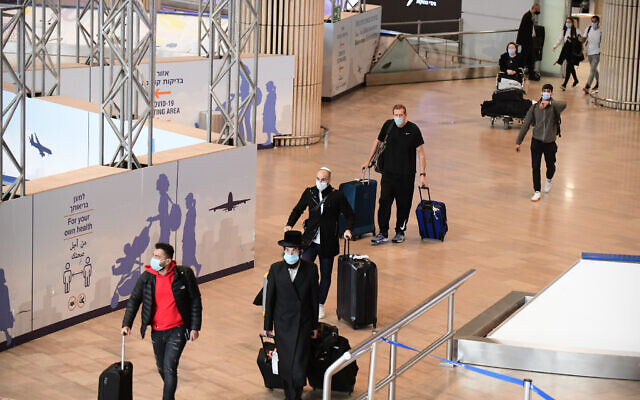 Bennett said he had been updated overnight that the new strain had been discovered in Israel and had ordered the government to purchase PCR test kits designed to better detect the variant.

The development came despite efforts to prevent the tribe from reaching Israel. On Thursday night, Bennett ordered that several countries in southern Africa be marked as “red”, which severely restricted their entry.

South Africa, Lesotho, Botswana, Zimbabwe, Mozambique, Namibia and Eswatini were added to the list of countries from which foreigners are prohibited from entering Israel.

The list had been empty for about six weeks, as no country had fallen under the Ministry of Health’s “red” criteria.

Returning Israelis, including those fully vaccinated, from any of the countries now considered “red” will need to be isolated in a state hotel for a week and will be released after receiving two negative PCR virus tests, Bennett said in a statement. . Returnees who refuse to be tested will have to isolate themselves for two weeks in a state-owned quarantine hotel, the statement added.

Bennett “also instructed that an immediate evaluation be held on stopping flights from these countries to Israel and vice versa, or the implementation of another plan to prevent the variant from spreading to Israel.”

Researchers in South Africa revealed on Thursday that they had discovered a new COVID-19 variant with “a very large number of mutations”, accused of an “exponential” increase in infections there.

The number of daily infections in Africa’s hardest-hit countries has increased tenfold since the beginning of the month. 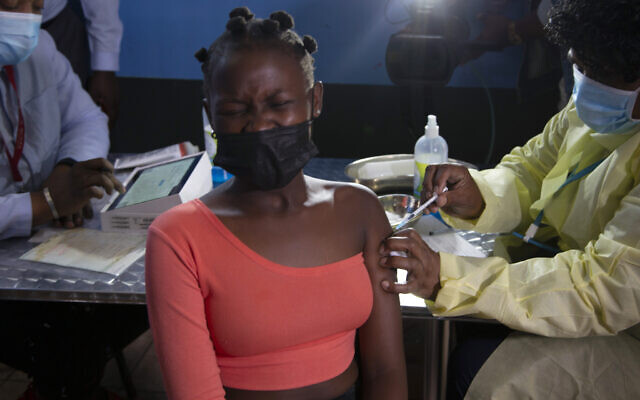 A young woman reacts when she receives a Pfizer blow to covid-19, in Diepsloot Township near Johannesburg, October 21, 2021. (AP Photo / Denis Farrell, File)

In Israel, the Ministry of Health’s data on Friday showed that 524 people had been diagnosed the day before, with the figure representing 0.69 percent of the more than 82,000 tests performed.

There were 166 hospitalized, of whom 120 were in serious condition. Data showed that almost 85 percent of the serious cases are among unvaccinated individuals.

Ministry of Health officials warned lawmakers on Wednesday that there may be a need for new virus restrictions if cases exceed the threshold of more than 1,000 new infections diagnosed per day or the frequency of infections increases.

“If we manage the transmission rate of 1.2, we will need to use restrictions to reduce the amount of crowds as a first step, including in premises operating during Green Pass, as these are events where more infections are seen,” Ilana Gans, Head of the Department of Public Health Services at the Ministry of Health, told the Knesset’s Constitution, Law and Justice Committee.

Figures from the Ministry of Health on Friday showed that Israel’s transfer rate was 1.08, based on data from 10 days earlier.

Also known as the “R-number”, the number represents the average number of people infected by each confirmed patient. Each number over one means that the number of cases increases. The infection rate had been below one for two months before it reached that threshold several days ago.

AFP contributed to this report.

For as little as $ 6 a month, you can help support our quality journalism while enjoying The Times of Israel AD-FRI, as well as access to exclusive content available only to members of the Times of Israel Community.