Home
»
Latest News
»
Australia
»
Bill it and they will come 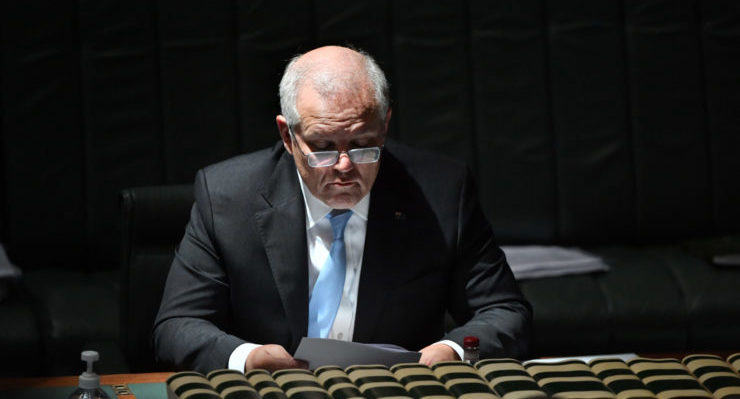 The mutinous attacks keep on coming for Prime Minister Scott Morrison — the latest is from Liberal MP Bridget Archer, who says she’ll cross the floor to back an independent Helen Haines’ federal integrity commission bill, Guardian Australia reports. Morrison promised the federal ICAC at the last election and he claims, nearly three years later, that Attorney-General Michaelia Cash is still working on the bill (after the first draft was criticised as toothless), as ABC reports — so where is it, Archer asks, and why is the religious discrimination bill being rushed out first? Indeed the Coalition already battered away a pushy motion from crossbenchers, Labor, and the Greens on Tuesday in the Senate, which resulted in a tie because One Nation sided with the government. Wonder what they want in return.

Morrison is introducing the religious discrimination bill to parliament today — but it’s not up for debate and a vote until next week, and will go before a Senate inquiry after that. Opposition leader Anthony Albanese is backing the bill, saying he personally knew no example where a LGBTIQ teacher had to leave their job (erm, here’s one in a national broadsheet), while opposition-leader-of-my-heart Tanya Plibersek said protecting kids was paramount, the SMH reports. Coverage in The Australian ($) yesterday claimed there was locked in protection for kids — but SMH’s David Crowe points out there are absolutely no changes in the draft law ensuring that. Plus, the AFR says, bosses are now fearing sexist, racist and homophobic “statements of belief” will disrupt Australian workplace culture — stuff like “women should not be in positions of power at work”, which would hypothetically be in line with some bible passages. Oh, lord.

Get Crikey FREE to your inbox every weekday morning with the Crikey Worm.

Universities across Australia will get a shot at one of four $60 million research grants, The Conversation reports. It’s all part of Prime Minister Scott Morrison’s push to commercialise research but comes with a catch — the bidders will have to have a separate business unit, and that unit will be subject to different industrial relations laws than the uni itself, the AFR explains. The reason? The government reckons the uni framework rewards the notorious over moneymakers — people who churn out papers are prioritised over those who come up with profitable products, businesses, or drive growth.

Morrison announced the program at the Business Council of Australia last night — and Education Minister Alan Tudge wrote for The Australian ($) this morning that it’ll see our “publish or perish” culture in universities make way for manufacturing priorities like defence, space, resources technology, food and beverage, Guardian Australia reports. Tudge concludes that he knows not every university will be champing at the bit to commercialise — and suggests the others can watch and learn. The boost has been welcomed by the strangled uni sector, who lost 35,000 staff during the pandemic, after the government refused them access to the $89 billion JobKeeper pot, The Canberra Times adds.

In some good climate-related news, east coast electricity bills will be going down in the next three years, according to the industry body, the SMH reports. Several state governments’ proactive emission targets are seeing cheaper renewable power like wind and solar in the grid, and the Australian Energy Market Commission’s (AEMC) price trends report reckons that’ll see bills decrease by $126 in south-east Queensland, by $99 in Victoria, and by $50 in NSW. Though, The Australian ($) adds, the closure of the Liddell power station in 2022-23 will see them spike a little in their downward trajectory. Nevertheless, AEMC boss Anna Collyer says, the message is clear: “integrating renewables in a smart way makes it possible to have both lower emissions and lower costs for consumers”.

Speaking of — the ABS released a report yesterday that showed our renewable energy generation increased by a whopping 15% in 2019-20, and we actually used about 5% less energy in the same period. Solar is leading the charge (mind the pun), Guardian Australia adds. It comes as part of a coal-fired power plant was blown up yesterday in the Blue Mountains, the end of an era after it stopped operating in 2014. Check out the footage of the 175-metre-high chimneys toppling — it’s pretty spectacular.

ON A LIGHTER NOTE

NASA is going to fling a refrigerator-sized spacecraft around the sun to smash a pyramid-sized asteroid into smithereens, The New York Times reports. Even though it sounds like a save-the-world Hollywood epic (my movie would star Charlize Theron and Sandra Bullock, together at last), we can relax — NASA says they’re just making sure they can do this sort of thing. “We don’t want to be flying an untested capability when we’re trying to save a population on the Earth’s surface,” NASA’s Lindley Johnson says. Hmm, quite.

The Double Asteroid Redirection Test mission — with the rather apt acronym of DART — was launched on Wednesday, and a small asteroid named Dimorphos will meet its end in October-ish next year. Dimorphos, and its sister Didymos, orbit the sun on an egg-shaped path every two years, popping all the way out to Mars on the way around. Even though Dimorphos is roughly the size of one of Giza’s pyramids, it’ll actually be the smallest thing ever visited by a spacecraft. That means the NASA boffins will have to hit a bulls-eye when it gets as close as possible to Earth — which is still about 10,943,540km away (that’s about three times the distance to the moon). In true 21st century fashion, they’re using an algorithm to target it. “There’s no joysticking it in,” Johns Hopkins Applied Physics Laboratory’s Andy Rivkin says. In my movie there is.

Wishing you a calm Thursday — everything is going to be okay.

We are shocked and deeply saddened to learn that 27 years ago Moreland was named after a slave estate. The history behind the naming of this area is painful, uncomfortable and very wrong. It needs to be addressed.

The newly minted Greens mayor has confirmed Moreland City Council in Melbourne’s north is the latest to face its namesake’s horrible history head-on. Moreland was named so by Farquhar McCrae for the Scotsman’s family sugar plantation in Jamaica. The name was a clear snub to a British law passed six years prior, which declared slavery illegal. It follows the NSW government’s commitment to renaming Ben Boyd Park, named after an infamous Scottish slaver.

“Staff from the office of Australia’s eSafety Commissioner Julie Inman Grant admitted that her appearance on the podcast of a US-based anti-porn, anti-sex trafficking organisation added to LGBTIQ+ and sex worker communities’ fears about her new powers.

“Emails obtained through a freedom of information request reveal the fallout from Inman Grant’s interview on the National Center on Sexual Exploitation (NCOSE)’s Ending Exploitation podcast to talk about her office’s initiatives.”

Money, secrets and networks: who and what drives the Australian Christian Lobby

“The religious discrimination bill has been a test of strength for the Australian Christian Lobby, which has suffered political losses on its conservative Christian agenda, especially with same-sex marriage laws. But today it has declared it is ‘encouraged’ by what it sees in the government’s draft bill but ‘disappointed’ at what has been left out.

“The organisation is now in its 20th year and has the backing of some powerful individuals as well as strong connections to the Liberal Party and Morrison. Yet for all the public flexing of its muscle there is not much known about the people and the money behind it. Crikey went in search of those exercising power in God’s name.”

“The [International Energy Agency] says ‘beyond projects already committed as of 2021, there are no new oil and gas fields approved for development in our pathway, and no new coalmines or mine extensions are required’.

READ ALL ABOUT IT

Man-made horrors lurk at the bottom of the Mariana Trench, the deepest part of the ocean (NZ Herald)

Berejiklian’s halo has not slipped, survey shows — Alexandra Smith (The SMH): “As well as her likeability (the percentage of voters holding positive views minus the percentage holding negative views), the Resolve survey found a majority of people ‘still like and respect Gladys Berejiklian following ICAC’. More than 40% think she should not have resigned based on what emerged from the corruption inquiry.

“Within days of Berejiklian’s shock resignation, she was already being touted as the Liberals’ best hope for the federal seat of Warringah. The Resolve survey suggests that view would still hold. Except, of course, the Morrison government or indeed Berejiklian could not take the risk. While Berejiklian has not lost her hardworking public servant persona, thanks to the COVID-19 pandemic, she still has the ICAC report hanging over her head. The findings will not be delivered before the federal election.”

Scott Morrison’s rough week tops off a troubled year with internal divisions, derailed legislation and more questions — David Speers (ABC): “The final weeks of parliament for the year are always chaotic and sometimes turn into the ‘killing season’ for a leader under pressure. Things aren’t quite that dire, but after a bruising internal climate change debate, which left both sides unsatisfied, the frustrations and resentments are showing …

“Morrison hasn’t helped himself either this week, delivering a jackpot for the opposition in a single Question Time response where he managed to simultaneously raise fresh doubts over his honesty while reviving memories of the ill-fated Hawaii holiday by claiming he had texted Anthony Albanese to tell him ‘where I was going’. He hadn’t. An awkward correction was required.”