Home
»
Sports
»
Boston Red Soxs Chaim Bloom, Q&A: ‘Little League was it for me. It was as far as I wanted to go ‘ 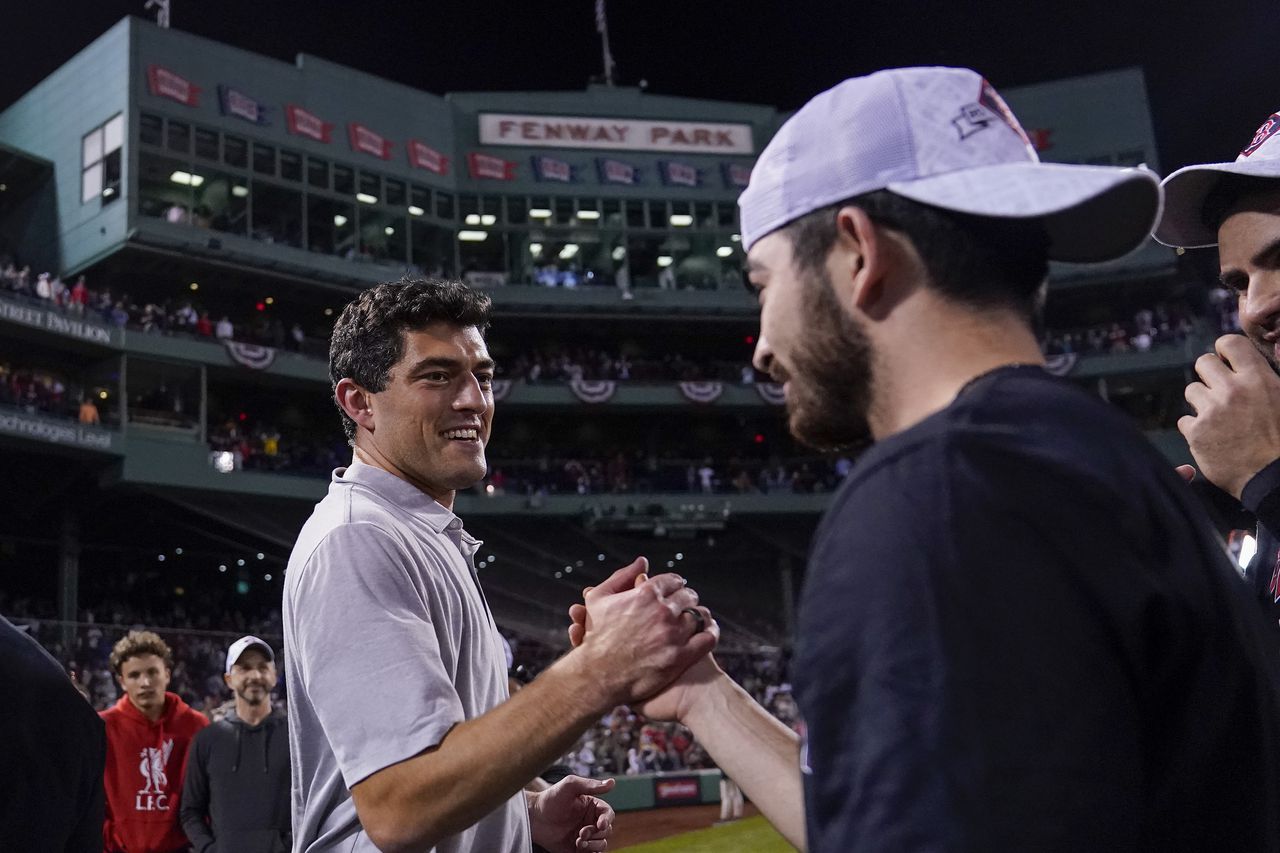 Red Sox chief baseball officer Chaim Bloom was a better swimmer and tennis player when he was growing up than he was a baseball player.

“Little League was it for me,” Bloom said. “It was as far as I wanted to go.”

Let’s take a quick break from rumors of free agents, trade talks, and labor negotiations to ask a few funny questions to Bloom and other MLB executives who spoke to MassLive.com at GM meetings in Carlsbad, California, earlier this month.

Bloom discussed his short baseball career, his days as a swimmer and tennis player, his first MLB match as a kid and more.

Smith: What was the first major league match you participated in as a child?

Bloom: “It was a Phillies match, but I could not tell you exactly when. I have very vague memories of it. But I actually once tried to see if I could figure out what game it was. I’m going to say it was against the Padres, and I’m not sure. I’m pretty sure Mike Schmidt played in it. But other than that, I could not tell you anything. ”

Smith: What got you into baseball. What kind of sucked you in?

Bloom: “I think it was gradually early in my life and it became more and more a part of my life. But what really made it for me was falling in love with the ’93 Phillies team. I was 10 years old. It was around that time that it became more of an obsession. “

Smith: Did one player increase that passion for you? I have to tell you, my favorite player was Tony Pena and I wanted to be a catcher, but I’m left handed.

Bloom: “I am also left-handed, and my favorite player as a child was also a catcher. It was Darren Daulton. I was realistic enough to know that I was not trying to be him, but he was just my favorite player. “

Smith: When did you learn that baseball was more than just what happens on the court? The analytical side.

Bloom: “I think when I got into high school, deep into high school, I became aware of this whole other world behind the scenes. And it was very early in college that I really decided to pursue it as a career. It was just fascinating to me. “

Smith: So it was really early in college?

Bloom: “When I was trying to turn my passion into a career, yes.”

Smith: When did you know baseball would not happen as a player?

Bloom: “Oh, it was clearly early. I am a far below average athlete and I have been that all my life. There was never a chance for me to play this match at a high level. “

Smith: What other sports did you practice growing up?

Bloom: “I swam. It was probably my best sport. I played some tennis.”

Bloom: “I kind of did them all. All four major battles. “

Bloom: “No, I stopped after middle school. My high school did not have a swimming team. … But freestyle and backstroke were easier for me than breaststroke and butterfly. ”

Smith: Do you still play tennis?

Bloom: “Very rarely. Once in a while I play against my wife (Aliza). She is much better than I am. ”

Smith: What sport do you play for fun now? Do you golf?

Bloom: “I have played golf a total of twice since I became a parent. … So it’s been a while. But I enjoy it. I like playing pickup basketball. “

Smith: Are you a good shooter?

Bloom: “No. No. I’m taller than most people, so I’m just trying to stand and throw some elbows.”

Smith: Who do you play pickup basketball with?

Bloom: “It’s a long time ago. I used to play a lot of it for spring training. In fact, in the ’20s before closing we played a bit of it. It’s clear that last year, due to COVID concerns, we didn’t play basketball.”

Smith: Did you play tennis in high school.

Bloom: “For a year. Not a ton. Most recreation.”

Bloom: “No, I did not play high school baseball. Little League was it for me. That was about as far as I wanted to go. ”

Smith: Is your wife more athletic?

Bloom: “Yes, and by a real margin. She’s a tennis player. (Played in) high school. But she was actually good. ”

OTHER OFFICERS FOR THE OFFICE SPEAK

MassLive.com asked other executives about the first MLB game they attended as a kid what really got them passionate about baseball and their favorite players when they were growing up.

“The first major league game I ever participated in was very young and I only remember certain aspects. It was a Mets game at Shea Stadium. I remember Dave Magadan hitting a walkoff homerun for the Mets. I would say it was ’89 or ’90. Somewhere in there. And I was actually disappointed. I was glad the Mets won. I was disappointed because we were going home. I wanted the baseball to continue. I would say he hit the departure in the ninth, so I was very excited about extra innings.

“It (baseball) is part of my family. My grandfather grew up as a big Brooklyn Dodgers fan. When the Dodgers left, the Mets came, he stuck to National League baseball and became a Mets fan. I kind of fell into a baseball culture and baseball family.I loved playing.I played when I could.I just loved the game and still love the game.

“As a kid, I used to design myself as a pretty good shortstop. I’m not sure, but I like to think I was. And I had a good arm, but I could not really hit. So a similar guy with the Mets was Kevin Elster. So I really liked Kevin Elster as a kid. As I progressed through the ’90s, the Mets had some pretty good teams in the late’ 90s. It was the Mike Piazza teams. Ordóñez was shortstop and I was a fan of him. “

“First game I ever went to as a kid? I grew up in LA, I was a Dodgers fan, and my first memory would have been like ’80 or ’81 with the Dodgers. (Fernando) Valenzuela. (Steve) Sax. (Steve) Garvey. Ron Cey. These are the teams I remember best. And I remember taking a picture with Steve Sax as a player when I was probably 6 years old.

“I think it was just watching the Dodgers up close. Like I said, I saw Steve Sax for a player appearance and I wanted to be a midfielder. I wore No. 5 because Mike Marshall wore it in the field. I think you’re in a way of connecting with the guys who are bigger than life when you’re that age. “

(He participated in his first match at 4 or 5. He can not pinpoint the exact game).

“My dad grew up as a Dodgers fan in LA. He was into (Sandy) Koufax’s perfect game in ’65. I’m sure from the moment I was born I was going to play Dodgers.”

“I know it was at Yankee Stadium. That was where we went to matches – at the old stadium. I would say it was in the mezzanine. I was 6 or 7 years old. I do not remember much about the specifics. details, besides that I think we played the A. I was destined for the game but also interested in eating hot dogs and the atmosphere that comes with the ball field.

“I grew up in a family of four boys. We played (baseball) all the time. We always played athletics. Baseball was one of those sports that we played all the time in the backyard. And then just watch Yankees games for me. , when I was growing up and we sat and watched it on WPIX.

“Don Mattingly was my guy.

“When we had to hire a manager, Don was one of the candidates. It was a surreal experience for me. When I was growing up, he idolized him a little. I was obviously a right-handed percussionist and I tried to beat the left-hander to mirror his swing. It was clearly not very successful based on my playing career. It was a bit surreal to do that (interview him. “

“The first major league game I went to, I want to say I actually batted the game. (Dodgers) plays Cubs. My dad worked in baseball, my grandfather. My brothers work in baseball. So it’s in the blood to some extent.

“We were close family friends with Tommy Lasorda. He’s my brother’s godfather. So my grandfather and Tommy were best friends. My father worked for Tommy in the minor leagues when he was in charge. So the first game I can remember I went to, I would say I was 6 and I was a bat.

“In Wrigley. We played Cubs in Wrigley because we were originally from Chicago. Maybe they took me when I was really young and I do not remember.”

“It was a Texas Rangers game when I was probably 3 years old. I do not remember much about it. I just remember my parents drove me out to the old Arlington Stadium and I just loved it.

“The ties to my dad. Just go out in the front yard, throw baseball with him or go to the park and hit and get him to pitch to me. Or sit and watch big league games with him. That tie was special.

“When Nolan Ryan came to Rangers in ’89, it really gave me this love to pitch. That was the moment I decided I wanted to be a pitcher. I could not be Nolan Ryan, but nonetheless, he helped grow the love of pitching for me. He changed my fandom for the Rangers. “

“I grew up about 45 minutes or so north of Baltimore. And I went to an Oriole game when I was a kid. Orioles-Blue Jays at Memorial Stadium. I was probably 4 or 5. I can not remember anything about it. But I got a results book.

“My dad actually played college baseball when I was born. I joke with the family, I say, I went to baseball games and I can not even remember what happened.

“I played baseball when I was growing up and just fell in love with baseball. As a kid, as an Orioles fan, Eddie Murray was probably my favorite player. But it was early. Orioles chose Ben McDonald with the overall No. 1 pick. I was to a minor league game.I had a buddy who was batboy for the Harrisburg Senators …. Ben McDonald was number 1 and I went to the minor leagues to see the Orioles (prospects) … and I met Ben McDonald in the bullpen “Ever since then, I’ve been a huge LSU fan. And I loved LSU baseball when I was growing up in Pennsylvania. So that’s one of the reasons I wanted to go and try to move on.”

“1990 Braves game at Atlanta-Fulton County Stadium. So it was just before they got really good. I’m pretty sure David Justice hit a home in that game. I was definitely a big Dale Murphy fan. And so obviously the next year in ’91, they went worst to first.And I was obsessed at that point.It was a pretty easy fandom.All ’91 to ’94 Brave, I can tell you their first, middle and last name .

“Early on I was a Ron Gant guy. So obviously (Greg) Maddux, (Tom) Glavine, (John) Smoltz. Those guys really came on the field. I enjoyed watching the starting pitchers day in, day out. I mean, “There were so many good players there. Chipper (Jones) came in. I just think the whole team. Like all my other friends, I was pretty obsessed.”

Red Sox’s Chaim Bloom (then with the Rays) looked dramatic last night in the 2011 season in the Boston suburbs to celebrate Rosh Hashanah: ‘It was a damn night to miss’