PLOT: A young man (Fred Hechinger) forsakes his wealth and privilege to explore the American west. He’s talked into bankrolling a Buffalo hunting expedition by Miller (Nicolas Cage), who’s become obsessed with his all-consuming trade. Soon, the two are on an endless expedition threatening their lives and sanity.

REVIEW: As a lifelong Nicolas Cage fan, it’s tremendously rewarding to see him again respected as perhaps the most iconoclastic actor of our era. While I’d argue there are bigger stars out there, there are few on-screen personalities to match Cage, and while he was stuck in an endless loop of DTV movies for too long, he’s since re-emerged and regained his reputation as a master of his craft. It helps that even in his worst movies, Cage never phoned it in, which is perhaps why he’s been able to come back much more than many of his contemporaries who’ve found themselves in similar ruts.

Butcher’s Crossing is a modest western that’s likely only bound for a minor release, but it’s an interesting work that gives Cage a worthy role to chew on in this first entry into the genre. It’s an austere western, much more in line with something like Meek’s Cutoff than Unforgiven. It tells an honest story about a dark time in the American West, where buffalo hunters brought the bison to near-extinction levels, starving the Indigenous population.

The film is based on the novel by John Williams but also seems to be taking a page from Apocalypse Now, with Cage’s Miller a Kurtz-like figure. Sporting a bald head (with looks great on Cage) with a livid scar running across it and a mighty beard, Miller is an imposing and scary-looking guy, but he’s not portrayed as a monster. He’s just a man consumed by his trade, with the rich rewards draining him of all empathy and compassion. Nothing will get in his way of a good hunt, not even a family he encounters who’s been left for dead. It’s a hard country with no room for kindness, but he does have some redeeming qualities. He seems fond of our naive young hero (who narrates the movie) and also takes care of an aging mountain man (Xander Berkley’s Charley Hoge).

Out of necessity, Miller is forced to bring along Jeremy Bobb’s bullying Fred, as he needs a hide-skinner for the hunt, but he has no time for the man’s constant prodding. As the movie continues, Hechinger’s Will becomes seduced by the madness of the buffalo hunt, with Miller killing hundreds and reveling in the slaughter. It all comes to an ironic and fitting conclusion that strikes a melancholic note. Cage is superb in another low-key character part. It’s similar to his work in Pig, with Cage delivering a self-reflexive performance, which complements director Gabe Polsky’s approach.

It’s only Polsky’s second narrative feature, but he’s an accomplished documentarian and tries to give us, as an audience, an honest and accurate idea of what life would have been like on such a hunt. The cinematography, which isn’t afraid to get dark in the numerous scenes set around a fire at night, is similarly unfussy.

Rachel Keller, of Fargo and Legion, plays a young prostitute who tries to seduce Hechinger as he’s so unhardened compared to the men she usually has to service, such as Boba’s hateful Fred. It’s a small part, but she offers an interesting juxtaposition of what life in such a brutal country can do to a person’s soul. Hechinger’s character is portrayed as a tourist seduced by the rough and rugged life, but as the film goes on, he learns exactly what a life like this takes from you – and it’s something you never get back. Paul Raci of Sound of Metal has a nice part as a financier of expeditions who tries to warn Will about how dumb his scheme to finance Miller’s hunt is, and his final scene with Cage is a killer. Watching these two pros at the top of their game go head-to-head.

While low-key enough that it is probably destined to be more of an underrated cult film than a major arthouse hit, Butcher’s Crossing is an absorbing, artful western that deserves to find an audience. Saban, who mainly specializes in VOD films, acquired it earlier, meaning it’s unlikely to get much of a theatrical run. Still, if you like this kind of character-driven, elevated genre piece, I recommend checking it out. 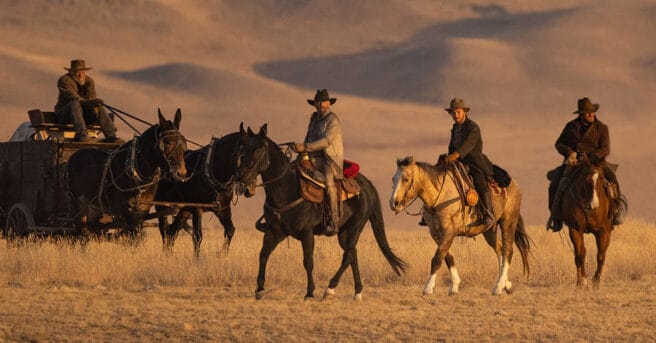