“Trying to swim upstream with COVID and reducing business volume, reducing staffing, and all this has been a couple of years,” says Stuart Jensen, co-owner of Brass Tacks. “We had to look carefully at everything and realized it was no longer in the cards, and at that point it was better for us and our mental health to stop trying to fight it.”

So the bar at 1526 Blake Street will pour its last drink on October 10th.

Brass Tacks opened in the former home of the Blake Street Vault in February 2019 and has quickly become a favorite for its fun spins on craft cocktails served in a trendy yet casual atmosphere. Katsumi Yuso Ruiz and Stephen Julia of Denver Central Market Curiosity Bar They were behind the project along with Mercantile alum Jensen and chef Zach Spott. “We were on a really positive trajectory before COVID,” Jensen recalls.

Yuso Ruiz, Julia, and Jensen also opened Roger’s Liquid Oasis at the Edgewater Public Market in November 2019. This outpost and Curio are anchored by the dining halls and located away from the city centre, which gave the bars a fighting chance. Jensen explains that the business in these locations is “very consistent and flexible.” But not so with Brass Tacks.

Before the pandemic, Brass Tacks attracted a diverse clientele. “There are definitely a lot of people working in office buildings, and a lot of them haven’t returned,” says Jensen. “We had a lot of hospitality industry goers, and most of these people moved away from the industry…concert goers, sports, things like that.”

The suburbs that once frequented the downtown bars and restaurants, and the tourists exploring the area, haven’t returned either. “There are so many great neighborhoods in Denver that’s got a lot going on right now,” he adds, “and unfortunately, I don’t think downtown is really one of those areas.”

While Brass Tacks has always been on the menu, cocktails have remained the main draw. Therefore, when the bars were forced to close for closed service in March 2020 and again in November of the same year, it was virtually impossible for the establishment to generate any revenue. While drinking is allowed to help mitigate the impact on businesses like Brass Tacks, “it’s really no substitute for being in a bar with people,” Jensen says. “Honestly, it was a huge waste of time, money and resources.” You have until October 10 to enjoy one last cocktail at Brass Tacks.

Brass Tacks were also at a disadvantage due to the lack of open space. Jensen explains that while other bars can add tables and tents to nearby parking lots, sidewalks, and even covered streets where indoor capacity is restricted, Brass Tacks struggles with “zero open space.” As the weather warms up this year, many bars and restaurants see a surge in business, while “summer has historically not been a great time for us. People love being outdoors and on the terrace in the summer.”

Another challenge: The escalation of violence in the city center is compounded by an increase in generally bad behavior from crowds trying to make up for lost time by “wildly” this summer. “We actually closed it an hour ago,” Jensen says. “We were concerned about the safety of our staff. … During the summer, it really felt like every other week we were confronted by an army of drunk people who had forgotten how to go out in public, behaving so badly.”

Hospitality workers have always been at the forefront of dealing with difficult guests, but the pandemic seems to have exacerbated that challenge. “I think unfortunately, a lot of people’s frustration with the shutdowns, COVID, the economic situation, the employment situation – all that sort of thing has overflowed and bars and restaurants have caught themselves in the crossfire of all this cultural tension. Jensen explains.

He thinks the bad guest behavior he witnessed at Brass Tacks is indicative of a larger trend in hospitality and a major factor in why so many industry professionals leave. “I think we have hope that people will understand how important restaurants are to our communities, our society and our culture, and that they will come out of this with more respect and appreciation for people working in the hospitality industry,” Jensen says. “I think we’ve found that the vast majority of customers continue to accept these people for who they really are and don’t appreciate the work they do or the time and effort they put into showing people a great experience.” 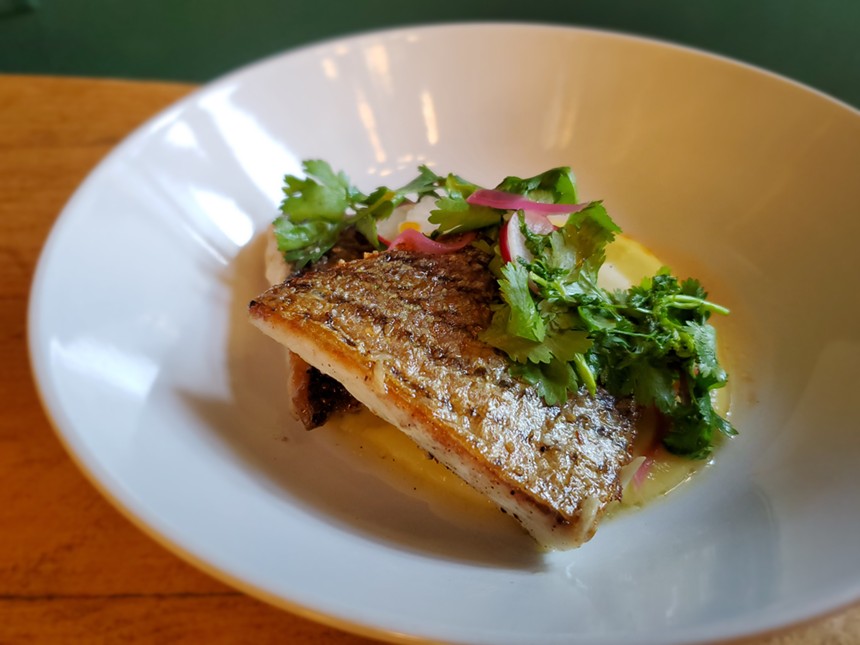 Brass Tacks rolled out a new menu this summer with more appetizers.

Despite all the downsides, the Brass Tacks team recently made some changes that they hope will give the bar a fighting chance. After Chief Spott left the bar earlier this year to open lunch box x At Denver Central Market, chef JV Hernandez has taken over the kitchen and launched a menu that includes some high-priced entrees. The goal was to make the bar a place for dinner as well, with people staying for a diverse experience, rather than just having a cocktail before heading elsewhere for the main event. “We feel good about the changes we’re making on the food front,” says Jensen. “But again, we encountered an inconsistent volume downtown. [The pandemic] It really changed the landscape of the city centre.”

With the cold weather approaching, Brass Tacks owners have finally called for closure. “Winter is a somewhat unknown variable at this point with COVID,” explains Jensen. With so many restaurants hiring at the moment, the team felt that closing now would give the bar’s existing staff ample opportunity to find new positions elsewhere.

But meanwhile, the team wants to give Brass Tacks a fitting farewell. October 10, the last day of service, will be a welcoming night for former employees and old friends for one more drink before Jensen, Yuso Ruiz and Julia turn their attention to Roger’s and Curio and take a well-deserved mental break to reunite. “Hopefully we can get a positive note,” Jensen says.