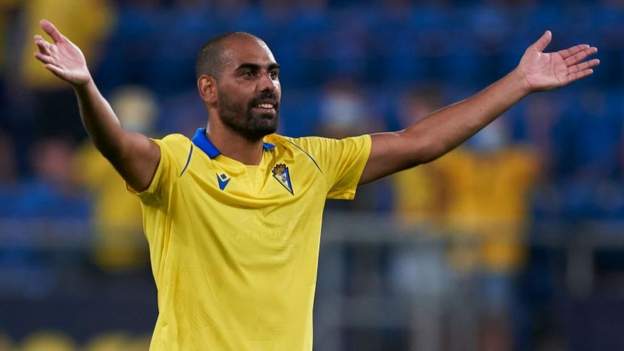 When Atletico Madrid take the next step in their La Liga title defense in Cadiz on Sunday, they will be confronted with one of the most colorful and unique characters in Spanish football.

Born in Valencia, Fali was on the books in nearby Villarreal as a youngster before returning to his hometown to join Levante and make his debut with their reserve team as a teenager in the semi-professional, regionalized fourth row in 2010/11.

A breakthrough remained elusive as he left Levante and spent a few years with Huracan in the third division (Segunda B) before being snapped up by Gimnastic Tarragona in 2015 after their promotion to the second tier.

Throughout the early days, Fali remained close to his gypsy roots, always happy to champion the close-knit community that developed his harsh but down-to-earth personality and gave him an independent worldview.

Recalling this origin, he once explained to the sports newspaper AS: “Our life is difficult. I got married when I was 16 and became a father when I was 17. In the morning I worked on the scrap and in the afternoon I went to training “I was 16, but I already had the mentality as a 30-year-old. People always say I look very old. After everything I’ve suffered, of course I do.”

Fali’s character strength always showed in abundance on the football field, where he plays with an unshakable sense of commitment. However, he is technically limited and it would not have been surprising if his career had followed a journeyman path in the lower strata.

But his life changed unexpectedly in January 2016, when his time in the relative anonymity of the lower leagues came to an abrupt end with a surprising loan to Barcelona’s B team.

In immediate football terms, it was a step down when his new team was in Segunda B, a level below Tarragona, but the status and expectations that lie in representing Barca – even their reserves – were quite different from anything he had previously experienced.

Andrea Orlandi, the former Barca, Brighton and Swansea player who is now an expert on La Liga TV, tells a story from Fali’s arrival at Camp Nou, which perfectly illustrates his great personality.

“Barca B signed him to bring leadership,” Orlandi explained to BBC Sport.

“He immediately felt that there was a lack of commitment in the team, so after two training sessions he stood up in front of the players and said, ‘Listen, I’m a gypsy and I need to feed my family. This is a once-in-a-lifetime opportunity for me. You have qualities I do not have, but if we do not win matches, I will not get a contract anymore. So if you do not show up, I will run after you. ‘

“Nobody does that kind of thing in Barcelona, ​​but he changed the mentality of the team and they started winning.”

He ended up staying at Barca B for two years and was regularly invited to train with the first team – then manager Ernesto Valverde instructed him to train with his usual physical intensity, but Fali joked that he could not get close enough to Lionel Messi to kick Hi M.

Fali played a key role in Barca B’s promotion to the Segunda Division in 2017, and although he then returned to Tarragona, his profile had increased markedly.

The following year, he was on the move again, joining the ambitious second team Cadiz, and at the end of his first full season with the Andalusian club, he celebrated yet another promotion. Finally, at the age of 27, he had achieved the best.

However, the new status has not changed him. While some players preach the values ​​of ‘humility’ while enjoying a rock star lifestyle, Fali lives with his wife and three children in a modest apartment in the center of Cadiz, a stone’s throw from their Nuevo Mirandilla stadium. He rarely goes out and does not even own a cell phone, and borrows his wife’s if he needs one.

On the pitch, he is always tough, but never dirty, the epitome of an ‘honest pro’ and possesses remarkable physical endurance – when he was carried off with a knee injury against Barcelona in September, it was feared he would face months on the sidelines; 10 days later he was back in the starting lineup.

Fali’s qualities, both on and off the pitch, make him a perfect fit for Cadiz, whose longtime manager Alvaro Cervera uses unpretentious playing methods that prioritize substance over style.

Cadiz are actively disinterested in having the ball and have on average only 35.8% possession so far this season – the lowest out of 98 teams in Europe’s five major leagues.

Fali describe their approach as focusing on “being effective in the two penalty areas”, something they have struggled to achieve during a recent win in nine games, leaving them only one point outside the relegation zone.

Their attempt to rediscover the form begins this weekend against the champions, and inspired by Fali’s personality power, you would not want to bet against them.