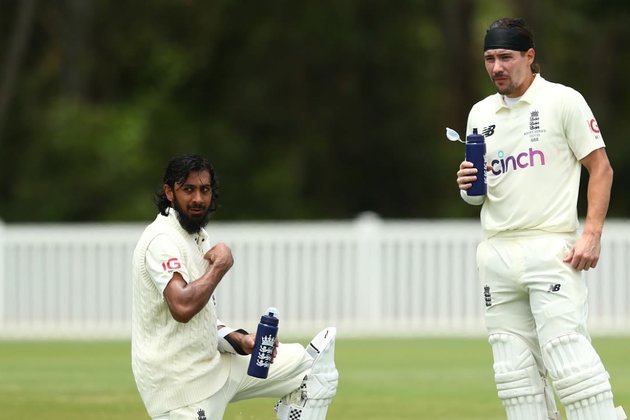 Rain and impressive kicks from England’s opening players delayed Ben Stokes’ return to low-profile cricket before his Ashes opening at the Gabba next month.

The England all-rounder arrived at the Peter Burge Oval in the Brisbane seaside suburb of Wellington Point on Tuesday with his Test teammates Joe Root, Stuart Broad and James Anderson.

The three-day match between England and England Lions is the first cricket match since July, when Stokes chose an indefinite hiatus to prioritize his mental health.

Only a few curious spectators gathered at Redlands Cricket Club to watch the tourists in the first two warm-up matches en route to the five-Test series against Australia.

Rain postponed the game and then ended trades one-on-one in the second session, after England’s opening pair Rory Burns (38 unavailable) and Haseeb Hameed (53 undelivered) brought them 98 to 0.

Stokes, who will hit the back of captain Root on the 5th place, looked fit as he spent his entire midfield run bowling during his lunch break.

Groundsman Chris Hepburn said that while the wicket was “hard and solid” despite recent wet weather, it wasn’t nearly as flat as it made the impressive pair appear in a commanding first wicket partnership.

He said there will likely be more life at the wicket next week, as the Australian camp wants conditions very similar to the Gabba lane for in-team kicks.

This three-day game from December 1-3 will be the last chance for Tim Paine, Alex Carey, Travis Head and Usman Khawaja to state their standings for selection in the first Test on December 8th.

Initially left out of England’s tour roster, Stokes later gave a huge boost to tourists’ chances of reclaiming the Ashes. Stokes, who most recently played a Test match in India in March, had recently returned to fitness before leaving the sport again after undergoing surgery for a finger injury.

He missed most of the Test series against Pakistan last year to be in New Zealand with his father, who died in December.

Anderson, 39, warmed up with the team but has no name to play in the warm-up fixture.

Members of the Ashes touring party competing in the T20 World Cup campaign will remain in quarantine on the Gold Coast for another week.