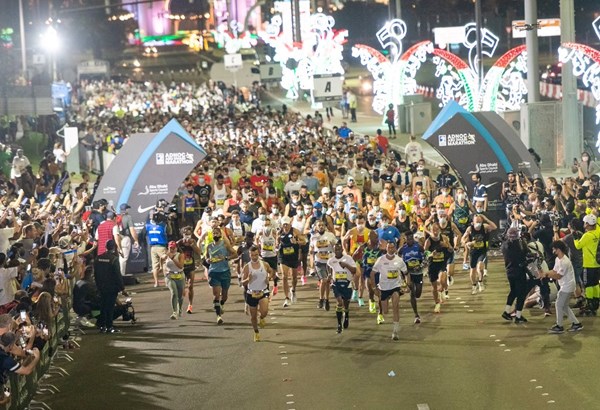 Today, Kenyan Titus Ikeru, “the fastest man in the world”, and Judith Courier ADNOC Abu Dhabi won 2021 Marathon titles for men and women, after the first to cover a distance of 42,195 km in 02:06:13 hours, while his Countryman ran the same distance in 02:22:30 hours, while Emirati Ayed Al Ahbabi managed to win the wheelchair title in the People of Determination category.
His Excellency Dr. Sultan bin Ahmed Al Jaber, Minister of Industry and Advanced Technology, CEO and CEO of Abu Dhabi National Oil Company “ADNOC” and its corporate group, His Excellency Dr. Mugheer Khamis Al Khaili, Head of the Department of Community Development, and Lieutenant General ” M “Mohammed Hilal Al Kaabi, Chairman of the Higher Organizing Committee Zayed Charitable Marathon, and Aref Hamad Al Awani, Secretary General of the Abu Dhabi Sports Champions Council, at the end of the event, who witnessed the participation of 12,000 runners in marathons and community races, representing 128 nationalities, in a wonderful scene that embodied the principles of peace, tolerance and love that all live in the country of the Emirates.

The event was witnessed by a large crowd of citizens and residents who enjoyed a wonderful atmosphere, in the village of Jamhour in front of ADNOC’s main building. The marathon also celebrated a number of precedents of different distances, in addition to the marathon race, during which different categories of young people and young people could participate.
The marathon witnessed the participation of a number of celebrities, including Herve Renard, the coach of the Saudi national football team, who congratulated Al Hilal on his victory in the AFC Champions League and gave special congratulations to his international players.
The marathon, organized by the Abu Dhabi Sports Council under the auspices of the Abu Dhabi National Oil Company “ADNOC”, which coincided with the country’s celebration of the 50th National Day, was held under the slogan “Run in Abu Dhabi”.
The marathon track was launched in front of the headquarters of the company “ADNOC” with a direct view of the monument by the founder of Zayed, while the participants in the community races started their races from 18th Street, which included distances: 2.5 km, 5 km, and 10 km, and after the starting line went over the Corniche, on a path that winds around Qasr Al Hosn, one of the oldest and most beautiful historic stone buildings in the capital Abu Dhabi.