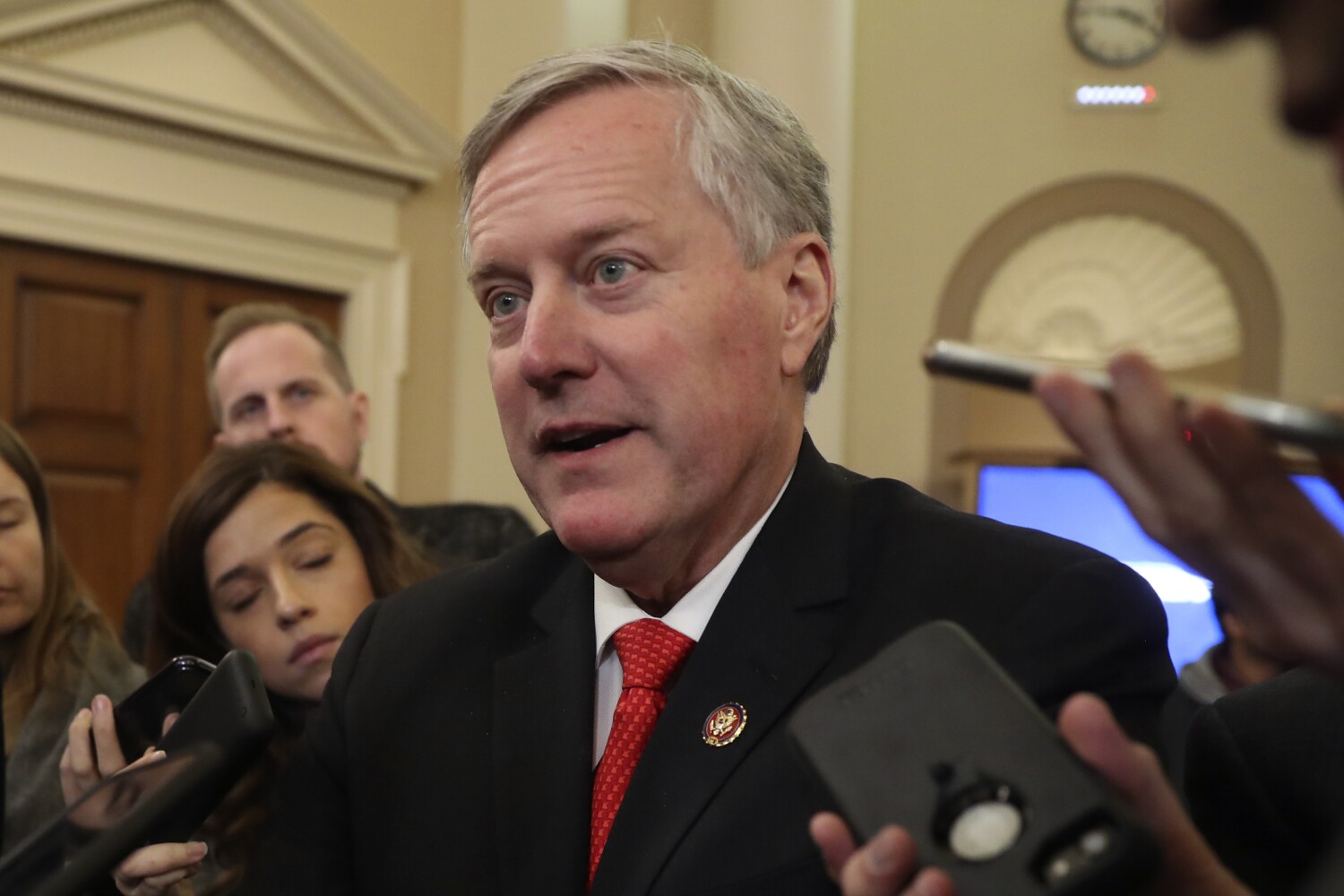 Now that Stephen K. Bannon has capitulated, growling and taking revenge, to face accusations of criminal contempt by Congress, attention is drawn from Parliament’s election committee on January 6 to President Trump’s last chief of staff, Mark Meadows, who followed in Bannon’s footsteps most recently. week by even refusing to appear for a planned deposit or handing over sued documents.

Judging by the current war of words, Meadows and the committee are at war and another criminal contempt plot is underway.

The committee member, Representative Adam B. Schiff (D-Burbank), said in “Meet the Press” on Sunday that Meadow’s contradiction “pretty much forces our hand … I am convinced that we will go very quickly against Mr. Meadows.”

Meadow’s representative, former assistant lawyer. General George Terwilliger wrote in the Washington Post last weekend that “the only way to a solution can be through the courts.”

On Tuesday, the chairman of the committee, rep. Bennie Thompson (Miss D) that he had sent a letter to Meadows: “We need these questions answered.”

But Meadow’s case is very different from Bannon’s. Both he and the board have a lot to lose on a criminal referral, which indicates that they can come to a solution.

For the Committee, a significant disadvantage of allegations of contempt for crime is that they would lose access to Meadows and his information. His alleged crime is what would be decided in federal court, and until the case was resolved, which would almost certainly happen after the committee’s effective life on January 6, no one in Congress would grill him.

It was a cost the committee was willing to pay with the flashy, ever-fighting Bannon. He’s made a lot of public statements that the committee can use – remember his podcast classic on January 5, “Hell will break out tomorrow”?

Not so Meadows, who has been trying to stay out of the public eye since the advance. As Trump’s primary caretaker in the end, he is perhaps the most knowledgeable source about the former president’s movements, statements, communications and emotions on January 6. News reports suggest that Meadows himself may have been deeply involved in an attempt to find Trump votes in Georgia and in the planning of the rally that triggered the Capitol. The House Committee does not want his evidence to be lost in a criminal trial.

Furthermore, the committee cannot predict what the outcome of a criminal referral would be. It does not know the details of the department’s decision to prosecute Bannon. Meadows’ communication with Trump, unlike Bannons, can be considered strong candidates for protection under executive privileges. If the committee refers Meadows to the Department of Justice, it is possible that the Department of Justice would evaluate Meadow’s criminal intent differently from Bannon’s.

The indictment against Bannon was a triumph of congressional investigative powers (and the rule of law) after the Trump years, when congressional sentiments were casually and successfully ignored.

If the board has reason to avoid a criminal referral, Meadows has it as well. His performance is light years from Bannon’s bring-it-on pugilism. He has nothing to gain from outlaws. Nor is he known for having the deep pockets needed to fund a federal court’s criminal defense. And after his time in the White House, he really hoped for a future in important professional DC circles. A criminal conviction for contempt of Congress would paralyze if not demolish these prospects.

It is conceivable that the committee is considering bringing a civil contempt against Meadows. If it could be done quickly, and if it succeeded, it would be a powerful alternative: Meadows would go to jail and stay where he complied with the committee’s mood.

Unfortunately, until recently, Team Trump has been able to address civil law cases aimed at investigating the former president for a year or more, and effectively take the civilian alternative off the table. It is true that the federal courts have gone at lightning speed (comparatively) to consider (and most likely reject) Trump’s own case in order to resist the committee’s document request. Still, Thompson and the company can not be sure of a speedy civil contempt measure; the committee could end up in a familiar morass of delays and stone walls.

It’s awful to think that Meadows can evade his entire legal responsibility to comply with a congressional requirement that is of paramount importance. But Meadows and the committee are locked in a game of chicken, where everyone has a significant risk of losing something very valuable – Meadows’ freedom and livelihood, the committee’s critical testimony. Sometimes games with chicken end in spectacular crashes. Sometimes there is a direct winner. More often than not, the combatants turn away from an all-or-nothing result. Look for something like this to happen here.