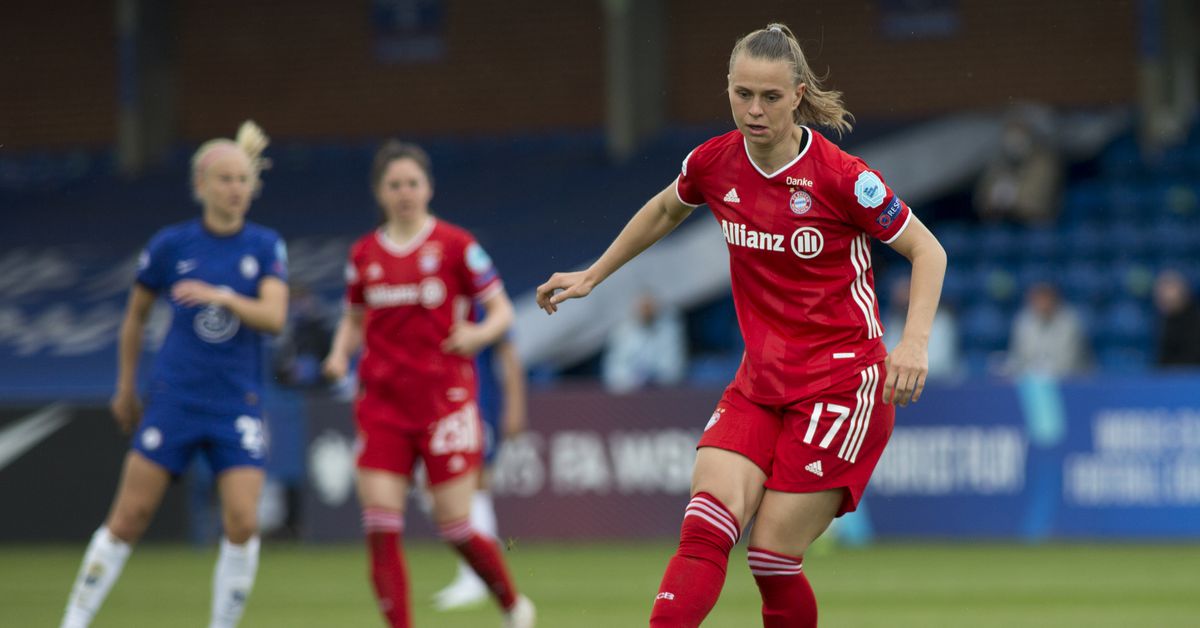 Full time: Bayern are beaten by Lyon, 2-1, in a brave effort from Bayern. A late goal from Lyon removed what would have been a well-deserved point.

90- Three minutes for Bayern to chase an equalizer.

86- Goals for Lyon. Amandine Henry scores with a header. Bayern could have defended better, although the header was impressive.

83- Bayern make another change! Simon off, Asseyi on!

75- 15 minutes left and Lyon get a free kick due to a mistake by Hanna Glas, Bayern clearer and try to start a counter.

65- Chances at both ends here, but desperate clearing keeps the score at par. Glas and Damnjanovic come on the field for Jakobsson and Schuller.

60- Lyon have mostly taken control here; Bayern, however, have had a couple of chances lately. They need to take advantage of one and keep Lyon at a distance. Nka and Hegerberg come on the field for Lyon.

50- Boo. It is a disappointing goal for Bayern to cash in after not really giving Lyon any chances. A corner kick was cleared, but Lyon got a shot on goal. Kumagai, who has been the best player for both teams so far in this match, sees his clearing deflected and Cayman shoots an easy shot past Benkarth to equalize.

48- Definitely not Schuller’s best game today. Bayern have a 4-on-2 counter-attack, but Schuller sends it straight to a defender.

HALF TIME: Bayern lead 1-0 over Lyon at the break thanks to Caro Wenninger (Buchanan OG is the official decision).

36- Magull does well to block a Van de Donk shot. Lyon get a corner kick, but a foul on the kick gives Bayern a penalty kick.

30- Jakobsson gets a shot blocked, but it falls near Beerensteyn, who hits it the first time. Endler may make a small dive to her right, but saves easily.

26- TOR FC BAYERN! Wenninger gets the foot of a post after a short corner and gives Bayern the 1-0 lead! (It could be judged an own goal at the end of the day, but still!)

20- Bayern get a corner kick, but Simon’s effort is poor and is easily cleared.

12- Malard has been released twice now behind Bayern’s backline, but she is unable to really test Benkarth. The defense needs to be sharpened a bit.

8- Beerensteyn makes a mistake and stays down. She needs help to get up and leaves slowly. It seems she can continue.

5- Lyon are really pushing Bayern deep in their own half of the field right now, but the Bavarians are getting the ball ready and reset. Nothing comes of it, but Bayern can not expect to play like that for 90 minutes.

Bayern are making a small rotation with Wolfsburg coming this weekend. That means players like Linda Dallmann, Maxi Rall and Hanna Glas are on the bench. However, the defense still looks solid with Carolin Simon, Saki Kumagai, Carina Wenninger and Giulia Gwinn in the back line. The attack is still tough with Schuller, Buhl, Beerensteyn and Jakobsson, but the match will be decided based on how well Linda Magull and Sara Zadrazil play in midfield.

As for Lyon, they are not really resting anyone. They are going after this despite their big match with Paris Saint-Germain this weekend. For American fans, keep an eye out for the future of USWNT in Catarina Macario in midfield.

Group D of the UEFA Women’s Champions League is warming up and Bayern Munich have the group’s toughest match ahead of them today when they travel to France to face Lyon.

“We go there to take something that can be counted. Everyone must have their 100 percent, “said head coach Jens Scheuer. “If we can do that, I’m convinced we’ll take something away. We go there with a certain expectation. We want to show that we play good and successful football. ”

Lyon currently sit at the top of the group with six points, while Bayern have four. They both managed easy victories over BK Häcken (Lyon 3-0, Bayern 4-0); however, it was the match against Benfica that separated the two teams. Bayern only reached a draw away to Benfica, while Lyon smashed them 5-0.

It’s a busy week for Bayern. Today they meet Lyon in the UWCL. On Saturday, Bayern Wolfsburg visit the Frauen Bundesliga. So on Wednesday the 17th they host Lyon in the UWCL. Lyon also have a top league match this weekend as they play against Paris Saint-Germain.

Check out our beginner thread if you have more questions. That’s what it’s about. It’s going on!

Looking for an infinite well with Bayern Munich content? Sign up for an SBNation account and join the conversation about Bavarian Football Works. Whether it’s full match coverage and analysis, breaking news, podcasts or something completely third, we have it all.