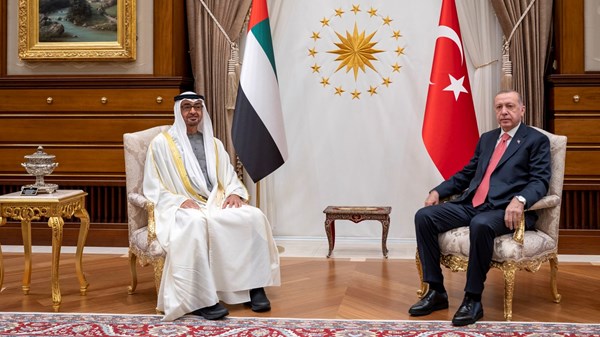 His Highness Sheikh Mohamed bin Zayed Al Nahyan, Crown Prince of Abu Dhabi and Deputy Commander-in-Chief of the Armed Forces, and His Excellency Recep Tayyip Erdogan, President of the Republic of Turkey, today discussed bilateral relations and ways to open new horizons for cooperation and joint work between the United Nations The United Arab Emirates and Turkey in all areas that serve their mutual interests, except for all regional and international issues and developments of interest to the two countries.

Today in Ankara, I met Turkish President Recep Tayyip Erdogan and we had fruitful discussions that focused on opportunities to strengthen our economic relations. We look forward to opening new and promising horizons for cooperation and joint work that will benefit the two countries and achieve their common interests and pursuits of development and prosperity. pic.twitter.com/ZkPFo3AQLj

His Highness said, through his official Twitter account: “Today I met Turkish President Recep Tayyip Erdogan in Ankara, and we had fruitful discussions, which focused on opportunities to strengthen our economic relations, development and prosperity.

This took place during the reception of Turkish President Hans Sheikh Mohamed bin Zayed Al Nahyan and the accompanying delegation to the Presidential Palace in the Turkish capital Ankara, where President Recep Tayyip Erdogan welcomed His Highness Sheikh Mohamed bin Zayed Al Nahyan’s visit to Turkey. country and expresses its confidence that the visit of His Highness will pave the way for a new, flourishing and promising phase of relations and cooperation, which is in the interests of the two countries, their peoples and the region.

For his part, His Highness expressed his joy at visiting Turkey and meeting with President Recep Tayyip Erdogan. He conveyed to him the greetings of His Highness Sheikh Khalifa bin Zayed Al Nahyan, the President of the State, may God protect him, and his wishes for his friendly country and people for continued stability and prosperity.

The two sides also exchanged views on a number of issues and developments in the Middle East, emphasizing in this context the importance of strengthening the pillars of security, peace and stability, which form the basis for launching development and construction and moving towards a prosperous future for the peoples of the region. after.

His Highness Sheikh Mohamed bin Zayed Al Nahyan expressed – in a speech during the official talks with the Turkish President – his aspiration that this visit – if God wills – will be the beginning of a new phase .. in the two countries and the two countries interest. and noted that the historical relations between the two countries were constructive, fruitful and effective – thank God – and today, thanks to mutual initiatives and a common concern to drive these relations forward, the two countries have taken positive and advanced steps during the the last few days..

His Highness added that the economic, trade and investment ties between the United Arab Emirates and Turkey are large and offer promising opportunities that can be invested and benefited from in various areas, especially trade without oil trade, which has grown significantly, and pointed out that this adds a strong foundation that can be built on and that can serve the development of our two countries in the coming period. His Highness Sheikh Mohamed bin Zayed Al Nahyan indicated that Turkey’s participation in Expo 2020 Dubai represents a great opportunity to strengthen development partnerships between the United Arab Emirates and Turkey, and to identify opportunities available in relations between the two countries in the coming period.

His Highness emphasized that the compass that guides the UAE’s foreign policy is to support peace, stability and development in the region; Therefore, we look forward to cooperation, partnership and positive relations with all countries in the region, of which mainly your friendly country .. for our goal is development and prosperity for all .. and our basic belief is that this is the way to achieve our people’s ambitions. His Highness said that Turkey is an important country and has a major role and influence in its regional and international environment and in various archives in the region. His Highness pointed out that the United Arab Emirates is keen to work with Turkey to find peaceful solutions to crises in the region that achieve peace and stability and open new horizons for a different regional situation, as our region has seen in recent years.

The Turkish President hosted a dinner banquet in honor of His Highness Sheikh Mohamed bin Zayed Al Nahyan and the accompanying delegation.