England have affirmed their standing as world cricket’s premier white-ball team, becoming the first men’s side to hold both limited-overs trophies simultaneously by squeezing past Pakistan in a tense T20 World Cup final.

In a low-scoring enthralling affair at a vibrant MCG, with Melbourne’s weather defying pre-match predictions of heavy rain by remaining dry throughout, a brilliant bowling performance from Sam Curran (3/12) and a nerveless finish from Ben Stokes (52 not out) and Moeen Ali saw England chase down Pakistan’s below-par 8/137 with five wickets and an over in hand.

Following the team’s 2019 ODI World Cup trophy, it fulfils the promise started by Eoin Morgan and company following a disastrous World Cup in 2015, after which England have revolutionised limited-overs cricket and become a world powerhouse after years in the wilderness.

Pakistan, though, were left to rue a knee injury to star quick Shaheen Shah Afridi sustained while taking a catch in the deep; he would return, but could only muster one ball before pulling up lame once again.

His departure would suck the life out of Pakistan, Stokes and Moeen taking to the part-time spin of Iftikhar Ahmed and backup quick Mohammad Wasim to hit 29 off the 11 balls after Afridi limped off, effectively ending the contest.

Curran edged out Stokes’ batting heroics to be named player of the match, while he was also adjudged player of the tournament after a remarkable campaign in which he claimed a tournament-high (excluding qualifying matches) 13 wickets at just 11.38.

Such is England’s depth in white-ball cricket that they could afford to err on the side of caution with injured regulars Dawid Malan (groin) and Mark Wood (hip), naming an unchanged XI to the team that routed India in Thursday night’s semi-final. Pakistan, too, opted to go in with the same team that had breezed through their later group stage games and ousted New Zealand in their own knockout.

With the rain remaining blissfully away despite dire pre-match forecasts, it would take several overs for either side to find their groove.

Stokes opened with a no-ball and a wide to continue his inauspicious record with ball in hand in T20 Word Cup finals, while it took Pakistan openers Babar Azam and Mohammad Rizwan three overs to find the boundary.

That pressure-reliever, a glorious flipped six over backward square by Babar, seemed the cue to lift in intensity; but such has been the order of the tournament for all sides bar England, Pakistan opted for caution over aggression in the PowerPlay overs.

Curran’s introduction didn’t help their cause, tempting Rizwan into a booming drive that he could only inside-edge onto his own stumps; with just five runs coming off his first two overs plus that wicket, the 24-year old could hardly have started better.

At the other end, Chris Woakes was more expensive, leaking a pair of boundaries to Babar and Mohammad Haris in the final PowerPlay over as Pakistan pushed ahead of run-a-ball pace. But at 1/39 after six overs, and with fielding restrictions lifted, the English were ahead of the game.

Adil Rashid’s introduction provided another flashpoint; reduced to a containing role this World Cup by unfavourable pitches for his canny legspin, Haris failed to take into account the dimensions of the MCG by attacking from his first ball, the result a simple catch for Stokes at long on.

Seldom giving anything away thereafter, Rashid would add the scalp of Babar to his name in his third over, the Pakistan captain looking to force a pull shot to lift the pressure and succeeding only in spooning the ball straight back to the bowler.

At the other end, though, Shan Masood was having better luck taking the fight to Liam Livingstone. England’s second spinner has become a crucial cog in their middle-overs bowling, but was treated with disdain by the left-hander, who larruped him for a spectacular six down the ground amid a 16-run over to give Buttler something to think about.

For all Masood’s efforts, wickets were beginning to tumble at the other end; when Iftikhar Ahmed feathered a catch behind off Stokes for a six-ball duck, the underdogs were in trouble at 4/84.

It was at this point, in an even more precarious situation, that Shadab Khan arrived to turn Pakistan’s tournament around in their must-win group stages game against South Africa. Then, he clobbered a spectacular 20-ball half-century to ignite the green army; with a gorgeous cover drive off Stokes, he seemed capable of doing the same in the final.

But Curran’s reintroduction for the final overs, where no one in world cricket has been more effective this tournament, proved another game-changer. Masood walked across his stumps attempting to distract the left-armer, succeeding only in chipping him to Livingstone in the deep.

With Shadab falling slogging Chris Jordan to mid-off an over later, and Curran adding a third wicket as last recognised batter Mohammad Nawaz tried and failed to lift him over the long boundary at deep mid-wicket, Pakistan’s innings had ended not with a bang, but with a whimper. 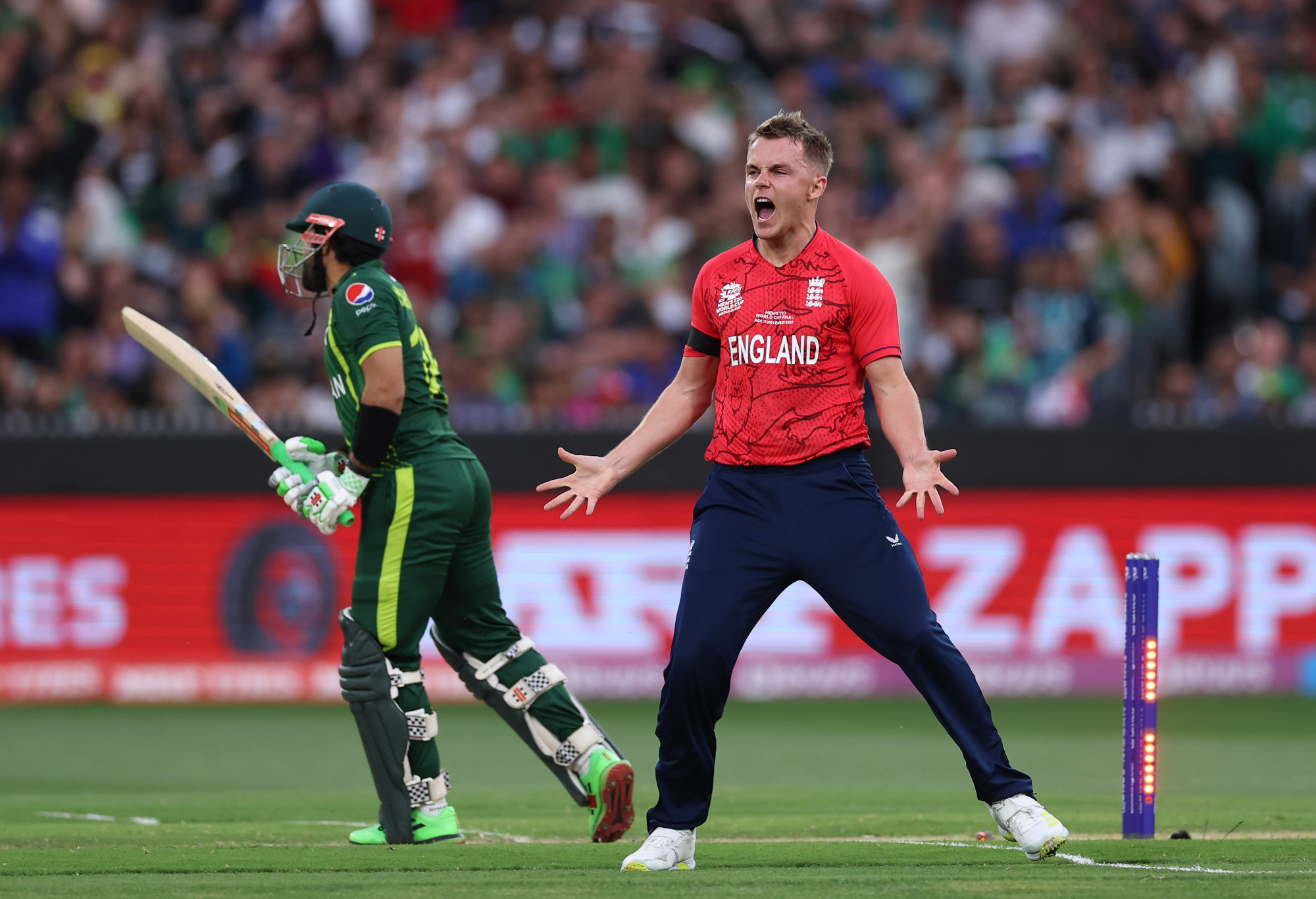 Just one boundary – a top-edged pull over the keeper from Afridi – came in the final four overs, and 18 runs in total, as Pakistan spluttered to 8/137.

Curran would finish with the remarkable figures of 3/12 from his four overs, leaving him with a handsome 13 wickets in a coming-of-age World Cup. The last World Cup played on Australian shores, in 2015, saw another left-armer by the name of Mitchell Starc become a global superstar; you wouldn’t put it past Curran to follow a similar trajectory in all formats in the years to come.

A run-chase of 138 would surely seem a doddle for an opening pair as red-hot as Buttler and Hales, coming fresh off a tournament record 170-run stand to make a tricky run chase against India look like a doddle.

Afridi, though, had other ideas; the left-armer’s world-famous inswing was simply too good for Hales, cleaning up a man with 185 runs from his last three innings and making the tournament’s most form player look totally outclassed.

Buttler, though, seemed capable of doing the work for two; despite Phil Salt managing just 10 before flipping Haris Rauf to mid-wicket, the England captain kept the scoreboard ticking over, as is their wont during the first six overs.

43 came off the first five overs, despite the loss of two wickets; given the low target, a fine start. But it only takes one ball to change things; when Rauf found Buttler’s edge for 26 in the final over of the PowerPlay, the whole of Pakistan seemed contained in Melbourne.

With just 36 runs in four innings for the tournament, and coming in with the green army breathing fire, this was hardly the ideal situation for 23-year old Harry Brook, just 10 months into his international career.

With the run rate not an issue, he and Stokes could ease their way through the middle overs; just three boundaries came during a 39-run partnership that brought England ever closer to glory.

It wasn’t without drama, though, as Pakistan’s bowlers lifted spectacularly; after a shaky start with the new ball, Naseem Shah gave Stokes a spectacular working-over. Three times in a row the left-hander was beaten by sharply swinging deliveries on a perfect length – the last was so close that Babar opted to review hoping for a faint nick, only to go unrewarded.

The stand was broken by Afridi – in the field, though, this time – as he clung to a lofted drive from Brook at full stretch at long off… only to go down in agony with an apparent knee concern.

Limping from the field, Pakistan faced the cruelty of needing to deny England without their premier bowler, with his two remaining overs suddenly needing to be filled. However, he’d gladden green hearts everywhere by returning after a few minutes on the sidelines.

With rain approaching fast, the prospect of an affected finish loomed large: with six overs to go, England’s total of 4/89 was a mere two runs shy of the Duckworth-Lewis-Stern par score, the first time in their run chase they had found themselves behind the going rate.

Brought on to bowl the sixteenth over, it was clear Afridi was struggling; he’d last just one ball before hobbling from the field, taking with him a good chunk of Pakistan’s hopes.

Backup spinner Iftikhar Ahmed, he of just three overs for the whole tournament, stepped up in the paceman’s stead, and Stokes sensed a kill.

Lucky to survive a lofted drive that landed just short of a desperate Babar at long off, the England talisman would follow with a crunched four through cover, then a powerful six just inches above the captain’s fingertips to make Afridi’s absence hurt all the more.

When Moeen Ali followed Stokes’ example by crunching Mohammad Wasim over cover and then to a vacant fine leg, 18 had come from the last four balls, and all the pressure accrued from Pakistan’s desperation defending had abated.

At a stroke, 41 off 30 balls had become 12 from 18, meaning England could calmly see off Haris Rauf’s final over, knowing spin and Wasim was all that remained for Pakistan.

The latter would keep Pakistan alive by castling Moeen after a match-winning cameo of 19, but unlike at Lord’s in 2019, it was too late to force a grandstand finish or a super over.

Stokes, in an act of redemption from the four sixes struck off his bowling by Carlos Brathwaite to decide the 2016 T20 World Cup final, would bring up 50 with another sizzling cover drive off a Wasim full toss; Iftikhar’s desperate, fruitless attempt to save the boundary summing it up.

Fittingly, Stokes would hit the winning runs, too, heaving Wasim through mid-wicket to spark celebrations in the England camp.

They become the second two-time winners of the men’s tournament after the West Indies, the first men’s team to hold the T20 and ODI World Cups at the same time, and officially, the best limited-overs team in the world.

If there was ever any doubt in the first place.