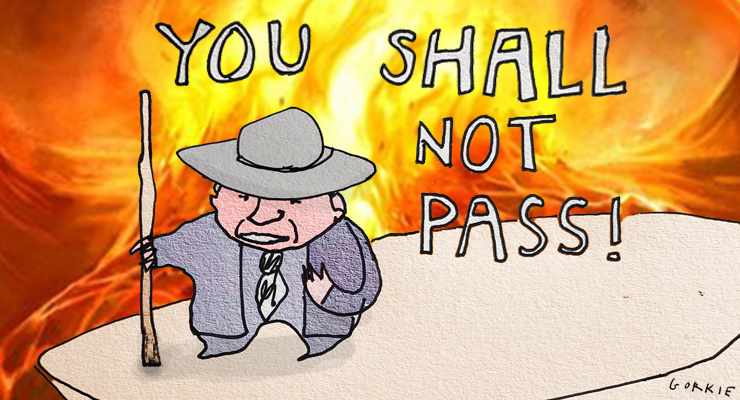 A thought experiment: An outsider who understands the basic concepts of parliamentary democracy visits us without knowing anything about Australia to examine how we govern ourselves. The Stranger particularly wants to see how we deal with the existential threat of global warming.

What does our visitor do to the image of a small group of politicians who refuse to accept the factual reality of the threat and, while representing only one of the eight voters at most, refuse to allow any action against the existential threat for longer than a period of time? ten years? And then he demands huge sums of money from the rest of the community to overturn his veto – will many of them fill the pockets of the people who financed these politicians?

His first question would probably be how this was allowed and then wondered why it was allowed to continue without police intervention.

But in Australia, it is perfectly normal for a group that collectively represent 13% of the electorate (4.5% for the National Party, 8.7% for the Liberal National Party in Queensland) to block and blackmail immediate action against a major threat. we do. billions of dollars not to object. On Sunday, we’ll learn about the price tag of allowing Australia to join the late 20th century and adopt emissions targets that would be appropriate in the late 1990s.

Part of this normalization reflects the National Party’s persistent failure to understand what it really is: Australia’s parliamentary system, taxpayers’ funds their own interests, and the people who fund it – today, fossil fuel interests. By any traditional measure, it is not a political party.

Being a political party requires having some form of government and public interest philosophy, no matter how distorted or terrible. Pauline Hanson is more of a politician than a National, even if you find her opinion on the national interest repulsive. There is at least one. Citizens do not have a philosophy, but a common blackmail purpose.

Part of this is the special tolerance given to citizens by the press gallery. Citizens have a perpetual license from journalists to be “colorful” and “authentic” and break fundamental political and governance rules with impunity. They are held to a lower standard of behavior than other parties – even small parties.

And these are the actions of a party in official coalition with the Liberal Party. Despite this, National Ministers are allowed to engage in actual ignorance of complaining that the “government” has not given them policies to ratify, as they are kept unaware of the policies developed by the cabinet of which they are a part. . So it’s private theater this coming weekend, where a National party room made up in part of National cabinet ministers will sit down and discuss the essentials of a policy that these ministers have already agreed upon.

To the media’s delight, however, this drama of the absurd has created a constant stream of stories, where the entire focus of journalists is drawn, with an activist Liberal leader trying to persuade stubborn Nationals about climate action. -war – using an extraordinarily expensive rope financed by taxpayers – between two parts of the same government and nothing about real politics coming out of the competition.

We’ve spent 18 months with this old-fashioned race call journalism – although in this case two winners will be announced in the coming days: Scott Morrison, who was victorious with the 2050 deal, and the Nationals, who align with billions more. corrupt taxpayer dollars. The only loser is Labor (always ‘wedged’, ‘thought out’ etc.

However, the biggest facilitators are not the racers perched high on the track, but the so-called “Liberal moderates” who amicably tolerate Nationals tribute and policy disruption.

The Zimmermans, Falinskis, Sharmas, Wilsons – they will inevitably be found in metropolitan newspapers with op-eds and flipped quotes calling for a little more climate action, desperate to avoid the fate of Tony Abbott. From the removal of the carbon pricing scheme to Abbott’s efforts to destroy its renewable energy target and eliminate independent climate agencies, carbon capture and storage and coal export subsidies, and the latest grunt, Angus Taylor’s “CoalKeeper” tax (which is a rare amusing Morrison joke, Wilson’s job now is to spruik).

The “moderates” marched shoulder to shoulder with the Nationals through the ruins of Australian climate policy, burning and looting as they went with the same enthusiasm as the bastards from the bush.

In the coming weeks, they’ll be helping the Nationals timber taxpayers with more boondoggles and rorts in the name of the sketchy climate distraction that the PMO geniuses and News Corp advisors have judged to be enough to prevent Morrison’s embarrassment in Glasgow. . Then they’ll try to gift-wrap the nasty scum of a policy to metropolitan voters, hoping that voters don’t squint, check the box, and realize they’ve been crushed once again.

That’s the problem with being a moderate who’s allegedly collaborating with thieves and thieves: No matter how much you encourage more renewable energy investment, keep coal-fired power plants, and look urban, you’re bound to end up being a part of the racket. Get sophisticated at your local north coast or Double Bay cafe.

You’re still an idiot used by scammers. Like the rest of us.

Get more Crikeys for less

Her more more than a newsletter. Where readers wait more – fearless journalism from a truly independent perspective. We do not bow to anyone’s party prejudices. We question everything, discover the troubling and dig deeper.

Join us this week for a one-year 50% off cricket.