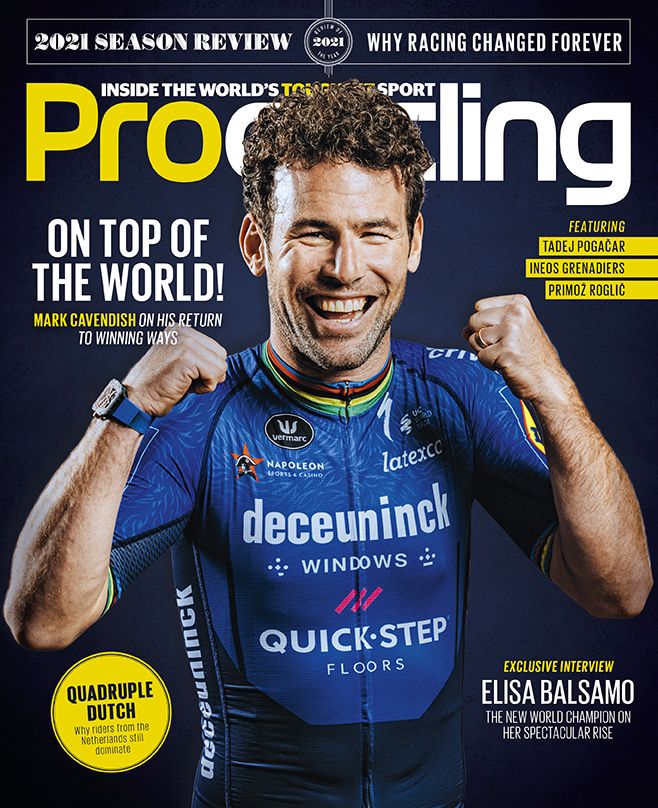 As a fantastic cycling year draws to a close, Procycling take a look back through it in our review of the year, which is out now.

While still affected by the COVID-19 pandemic, 2021 saw glorious races around the world, from the oppressive heat during the Tokyo Olympics to the first Paris-Roubaix Femmes ever in the rain-soaked northern France.

Mark Cavendish’s comeback story at the Tour de France was one of the most irresistible of the year, his journey to four stages winning a truly heartwarming tale. In early 2021, it looked unlikely that Cavendish would be near the Tour or even win any kind of sprint. In the end, he had won 10 races.

The Manx man told Edward Pickering: “Imagine there is a path with a wall at the end. I was driving at full speed in the hope that a door would open. As a professional, that was all I had to do, and in the end “As a professional, it’s my job to be in good shape in the event of that scenario. But on an emotional level, I was just hoping the door would open. It would either open or I would knock my head off.”

In our review of the year, we pick the season’s top 10 themes, which include the resurgence of the long-range attack, Lizzie Deignan’s killer instinct and the fallibility of Wout van Aert and Mathieu van der Poel (though they had their infallible moments, too).

There are also accounts of our five moments of the year, which included the women’s road race at the Olympics and the men’s edition of Strade Bianche. Our team of experts also selects the highlights of the year throughout.

Tadej Pogačar was the male rider of the year. The 23-year-old won extensively his second Tour, as well as Liège-Bastogne-Liège and Il Lombardia. He looked unstoppable at times. Alasdair Fotheringham spoke to the key figures around the Slovenian to get a sense of who he really is.

This included Jan Polanc, a co-rider at UAE Emirates, and Iñigo San Millan, head coach of the team. San Millan said: “He’s not afraid to lose, because even though he loves to train and break records at Strava and compete and so on, he also knows that if it does not succeed, it is not the end of the world. He does not rethink things. . “

Elisa Balsamo, the new world champion, was another star of the year. Winning the rainbow jersey was the biggest result so far of the young Italian’s promising career. She spoke with Herbie Sykes about beating Marianne Vos, coming to terms with fame and her switch to Trek-Segafredo.

Balsamo said: “My attitude is that I love cycling and I love racing, but I’m not the most confident person. I’m pretty tough on myself, and when things go wrong, I sometimes struggle to “It’s very important for me to be the best cyclist I can be and to feel that I’m doing things right.”

Wout van Aert, our 2020 Review of the Year cover star, had another fantastic year, though perhaps a little less successful than last season. Edward Pickering takes a look at his versatility, which was shown so clearly on the Tour, where he won a mountain tape, a time trial and a sprint, in his feature The Range of Wout Van Aert.

Also in the magazine, Procycling takes a look at the four Dutch people who dominate their sport: Annemiek van Vleuten, Demi Vollering, Marianne Vos and Anna van der Breggen. They stand out from the rest of the female field and in subtly different ways. Adam Becket takes a look at the quartet that won the individual Olympic time trial, the Liège-Bastogne-Liège, the Amstel Gold Race and the Giro Rosa between them. And much much more.

Some teams won more, and some won bigger than Bahrain Victorious in 2021, but the team drove aggressively and imaginatively to some big victories, despite controversy after them in the Tour. Kate Wagner profiles the team’s breakout year, where they won stage victories at the Giro d’Italia, the Tour de France and the Vuelta a España as well as the Paris-Roubaix. Their method could sometimes be summed up as ‘creative chaos’. But as Vladimir Miholjevic, the team’s technical director, told Kate: “Cycling is emotion. For the spectators, it should be a thriller book. It should not be a phone book.”

Primož Roglič could once again have failed to win the Tour, but instead won the Vuelta for the third year in a row, alongside the Olympic time trial. James Witts spoke with Jumbo-Visma’s performance manager, Mathieu Heijboer, who revealed the physical and psychological qualities that make the Slovenian almost invincible, including running every day.

This year’s review also includes a comprehensive statistics section and our latest diaries from the 2021 harvest. Charlie Quarterman, Kevin Réza and Brodie Chapman have offered different, insightful perspectives to the field through this year, and their latest contributions are no different.

Procycling magazine: the best writing and photography inside the world’s toughest sport. Get your copy in all the good kiosks and supermarkets now, or pick up a Procycling subscription.