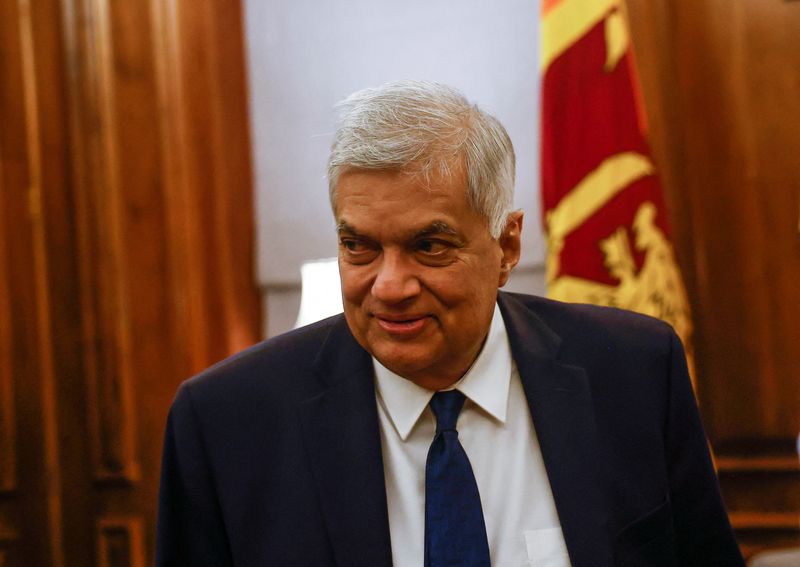 COLOMBO (Reuters) -Crisis-hit Sri Lanka unveiled fresh measures on Tuesday in an interim budget aimed at clinching a bailout package from the International Monetary Fund, talks for which, the president said, had reached the “final stage”.

The budget revised up the island nation’s deficit projection for 2022 to 9.8% of the gross domestic product from 8.8% earlier, while outlining a slide in tax revenue and a sharp net increase in expenditure.

Unveiling the measures in parliament, President Ranil Wickremesinghe added that the government would aim to rein in inflation and introduce legislation to bolster central bank independence.

The country of 22 million is battling its worst economic crisis since independence from Britain in 1948. Wickremesinghe, who took over as president last month, is pushing to adopt fiscal consolidation measures agreed with the IMF.

“The government has taken sufficient fiscal reforms, including the VAT hike in the interim budget as well as income tax raises … which were pre-requisites from a fiscal angle to qualify for the staff-level agreement,” said Udeeshan Jonas, chief strategist at Colombo-based investment firm CAL Group.

Negotiations with the IMF, which has a team of officials visiting Sri Lanka, had made headway, said Wickremesinghe, who is also the finance minister.

“It is imperative that we use this opportunity to correct past mistakes and implement long-term policies that will stabilise the economy and take us out of the challenges we currently face,” he said in his budget speech.

Sri Lankan officials hope the budget will be followed by a preliminary, staff-level agreement with the IMF for a loan package worth between $2 billion and $3 billion.

The revised budget estimates project revenues of 2 trillion Sri Lankan rupees ($5.6 billion) in 2022, down from an initial figure of 2.23 trillion.

Total expenditure is set to rise to 4.4 trillion rupees, exceeding the earlier estimate of 3.9 trillion.

The government’s primary deficit, essentially borrowing requirements excluding interest payments, is expected to fall to 4% of GDP, however, versus 5.7% in 2021.

“Given the policies outlined in the budget, especially around structural reforms and achieving a 2% primary surplus by 2025, groundwork is being set in place to put in reforms that the IMF is expecting,” said Shehan Cooray, head of research for Acuity Stockbrokers.

Sri Lanka’s sovereign bonds jumped 1.9 cents on the dollar after Wickremesinghe’s speech, although they were still below 33 cents, less than a third of their face value.

Outlining a raft of other measures to stabilise the bruised economy, Wickremesinghe said he aimed to bring annual inflation down to mid single-digit levels from more than 66% now.

Fresh taxes will be introduced in the next full-year budget but value-added tax will rise from Thursday to 15% from 12% now.

“The VAT hike was expected, but with the government looking to reduce the deficit to 9.8%, it looks like the revenue collections may not be sufficient with a contracting economy,” said Lakshini Fernando, macroeconomist for investment firm Asia Securities.

In the medium term, Sri Lanka will aim to cut its ratio of debt to GDP below 100%, versus 120% now, along with economic growth of 5%, Wickremesinghe said.

The economy is likely to contract 8% this year and growth is not likely until the second half of 2023, the central bank has said.

The damage was compounded by rising oil prices, populist tax cuts and a seven-month ban last year on imports of chemical fertilisers that devastated agriculture.

That brought chronic shortages of basic goods, runaway inflation and mass protests that forced then president Gotabaya Rajapaksa to flee, leaving his successor, Wickremesinghe, to tackle restructuring billions of dollars in debt to China and other countries.