Home
»
Sports
»
The Atlanta Braves won the World Series, making this the perfect time to change your name 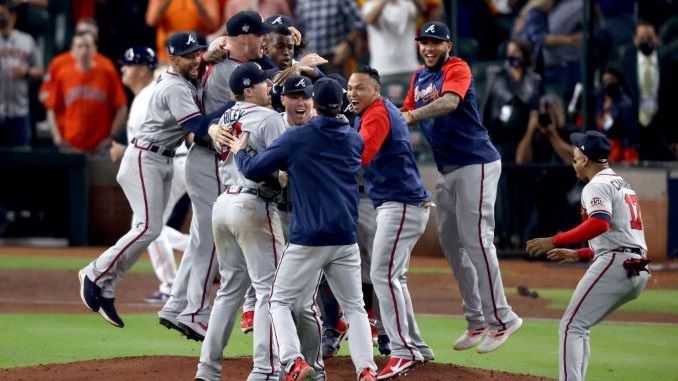 The Atlanta Braves have just won the World Series for only the second time in their history. It’s a huge win, not just for the team, but for all of Atlanta and Georgia, which have been starving for sporting success for decades. It’s also the perfect time for the Braves to finally address the issue of their race – insensitive name and turn it into something that does not demean Indians.

If you grew up as an Atlanta sports fan, like me, you know how miserable it can be. Atlanta’s professional sports team has felt cursed for decades. The Falcons and Hawks have never won a championship in over 50 seasons each, and despite an unprecedented run in the playoffs through the 90s and 00s, the Braves have only just won their second. The Falcons own the most embarrassing Super Bowl defeat in memory as they blew a 28-3 lead and lost in overtime. Based an hour outside of Atlanta, the University of Georgia’s football team, the Bulldogs, experienced a similar defeat in the national title game a year later, when a 13-0 lead over Alabama in the half turned into an overtime loss. Few cities have seen that combination of sustained, decades-long losses, only to blow it in a spectacular, embarrassing way once a team reaches the final game. Years of loss just knocks a fan base down, making them wonder why they still worry, while a last-minute defeat like the Super Bowl debacle feels like getting your heart ripped out of your chest. None of them are comfortable. Atlanta has been known as Loserville since 1975, when Atlanta’s Constitution gave it that name after a decade of sports in vain; the last few years have made the pain behind that name more acute.

Of course, there’s another kind of pain that the Atlanta Braves have caused over the decades, a sense of Native American Americans feeling mocked and ridiculed by the team’s name and its fans’ “Tomahawk Chop” song. The name “Braves” may not be as overtly racist as the previous names on Washington’s football team or Cleveland’s baseball team, but it’s still a reference to archaic racial stereotypes that turn real-life humans into cartoons. The Chop is a direct embarrassment that must be actively discouraged by the team; The name Braves is one that should never have had a place in our culture, but is especially outdated and out of line today. As major league sports finally take control of the racism found in some of their teams’ names and iconography, it’s only a matter of time before the Braves are forced to rename themselves something less offensive. Instead of waiting to be forced to do so, would it not be better for the Braves to take the initiative and even change it during the aftermath of a World Cup?

Many Braves fans will be saddened by a name change. Many people who have never been indifferent to the Braves and can not name a single one of their 90s starting pitchers will react with outraged outrage over a mythical “cancellation culture” that will angle to score political points out of something they Dont do. actually cares about and has no reason to weight it. The second group will moan no matter when the inevitable name change occurs; the first group, the only group that matters – the people who love this team and these players, and who felt the rush of inspiration and pride when they won the World Series – would probably still shy away from any name change, but it would be greatly tempered by the excitement of a World Series victory. This is the most popular that the Braves have been with their own fans since they last won the World Series in 1995, making this the ideal time to rip that patch off and give the team a new name. In an ideal world, the Braves would have announced their new team name (just before announcing a new contract extension for future Hall of Famer Freddie Freeman) at least a week-long victory parade in Atlanta. There is still time to get it done before the championship buzz disappears.

Those who defend the Atlanta Braves name, including both the team and the MLB, point to the organization’s relationship with the Eastern Band of Cherokee Indians – and ignore the many other tribes and indigenous organizations that oppose Chop and the name. The Braves call the Eastern Band of North Carolina-based Cherokee Indians, hours away from Atlanta, “the largest federally recognized tribe in our region.” Of course, there are no other tribes or groups closer to Atlanta because they were all forcibly removed from Georgia in the 1830s. Thousands of Cherokees perished on the forced walk to Oklahoma when their lands in Georgia were stolen by farmers and miners. The fact that the brave could not find any officially organized indigenous groups in Georgia to sign on their behalf, and had to reach out to a group in another state, only underscores the horrific treatment inflicted on the original people of North America. And that, in turn, only underscores how cruel and unacceptable it is to keep mocking them in the names of our sports teams.

As for a new name, there is one suggestion that stands out above the rest. I’m not sure who first got the idea to rename the Braves to the Atlanta Hammers, but that’s a perfect solution. The greatest brave of them all, Henry Aaron, known by all as Hank Aaron, died earlier this year; his nickname was Hammerin ‘Hank, and if any player deserves to have an entire team named in their honor, it’s Hank Aaron. Aaron remains the true homerun champion, a player who excelled in the face of enormous adversity, and the most honored and beloved player in the franchise’s 150-year history (not all of whom were used as Braves – they just adopted it name after more than 40 years of existence). He has earned the honor. It’s also a name that could easily be adapted to the current Braves iconography; here’s a Uni Watch post from January with a mock-up of potential Hammers logos and uniforms, all of which represent only a slight change from what Braves fans are currently used to.

Just to be sure, I’m not saying this as an outsider. I’ve been a Braves fan for as long as I’ve known baseball existed. I was born in Atlanta. I grew up in southern, both Florida and northern Georgia, when every single Braves game was broadcast nationally on TBS. Back then, everyone in the South was Braves fans because the closest any other MLB team came to the South was the Cincinnati Reds. Dale Murphy is still my hero. I went to Cooperstown with my dad and my brothers when Bobby Cox, Tom Glavine and Greg Maddux were all deployed in 2014 (along with former Braves player and manager Joe Torre, and from Georgia, Frank Thomas). I’ve had my problems with the Atlanta Braves’ management and ownership over the last few years, but I have never stopped loving this team or its players. And I fully support the fact that they are changing the name of the team now, of their choice, in the wake of a glorious victory, and not when they are inevitably forced to do so by Major League Baseball in a few years.

Note: Atlanta United won the MLS Cup in 2018, only in its second season, but as it goes against the “Loserville” narrative, it is largely not mentioned by most Atlanta sports fans.


Senior editor Garrett Martin writes about video games, comedy, travel, theme parks, wrestling and everything else that gets in his way. He is also on Twitter @grmartin. He was there at the Atlanta-Fulton County Stadium when Sid Bream slipped into home base to win Game 7 of the 1992 NLCS.