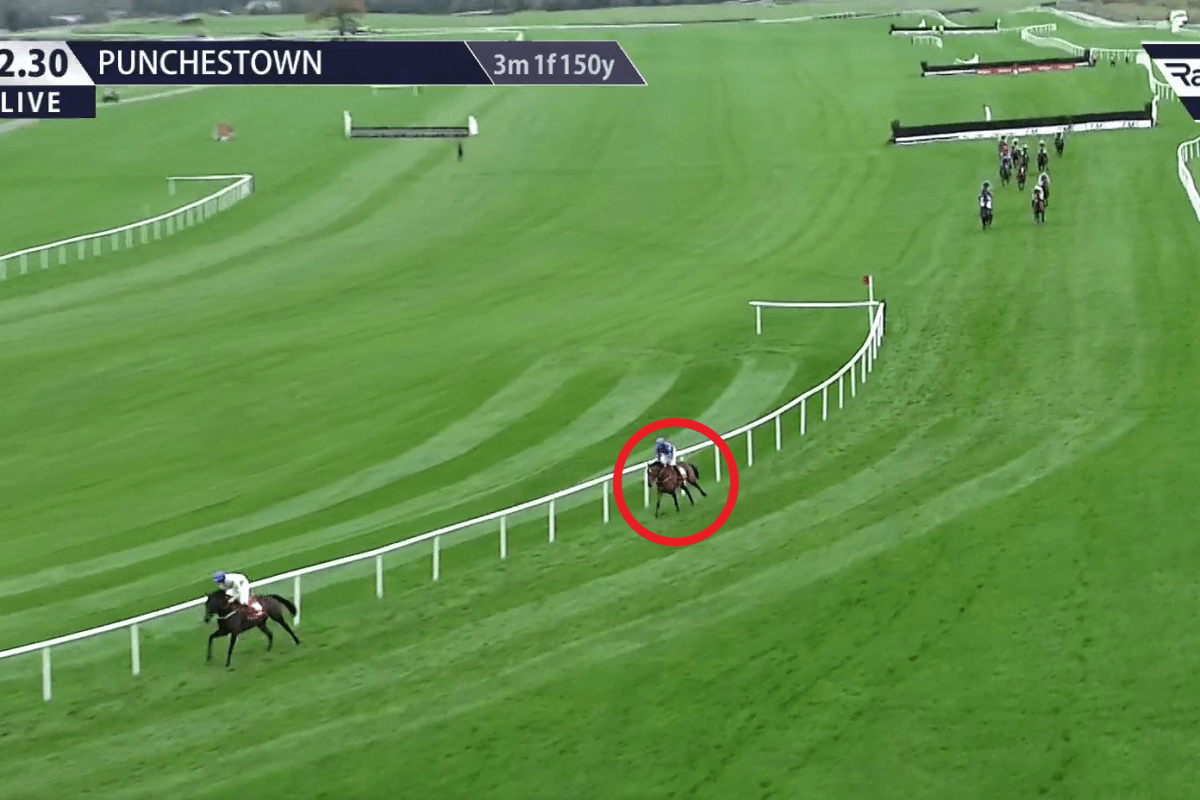 About 12 jockeys were brought in for questioning after a ‘complete farce’ of a race.

All Class landed a huge gamble at 12.30pm in Punchestown on Tuesday after being backed from 13-2 to 13-8 before off.

The Ronan McNally-trained mare, who finished 71 lengths behind the rider on her previous race last month, won the 3m1½f handicap hunt by 23 lengths.

Second Capture The Drama finished another 19 lengths ahead of Jimli’s Island in third place, which was a full 42 lengths behind the winner.

The bizarre competition – which saw the runners totally tense – was branded as a ‘complete farce’ by McNally, even though he benefited more than anyone else.

Interestingly, All Class had a monumental gamble for her former coach David Dunne.

The six-year-old was backed from 66-1 all the way down to 9-2 to win a flat handicap at Navan in March this year.

Confused stewards demanded answers to what had happened in yesterday’s race and spoke to 12 jockeys after the race.

😲 Earlier today, All Class landed a gamble in Punchestown in a race that was subsequently described as a “complete farce” by winning coach Ronan McNally.pic.twitter.com/cmHLAJdFt4

The only riders not asked were the winning jockey Donagh Meyler, second place and the two who fell at the first fence.

IHRB Communications Director Niall Cronin said: “The riders felt that the early falls helped them get so excited early and that they went very fast for the type of race it was.

“The Stewards took note of their explanations.”

McNally revealed that he had supported his runner, but tried to downplay the bet.

He told the Racing Post: “We had a few pounds on, but I did not want to read too much about it being a massive bet.

Bookies tend to run in cover with my horses.

“I also did not want to read too much into the race, it developed into a complete farce.

“If we had not followed the leader, we might have been in trouble while the rest slept.

“Hopefully the handicapper will not be too harsh on her.”

In the official stewards’ report on the race, it was noted that jockey Denis O’Regan said there was a ‘cavalry charge’ to the first fence.

The report read: “All horses went too fast and the early complexion of the race was dramatically changed with the falls at the first, and the front runners were further set on fire by the loose horses.

“This opinion was confirmed by the other riders, who all felt like they jumped off together and rode with the leaders, but it was the falls that pulled the race apart.”

This race had some similarities with a notorious victory of The Steward in Newcastle in February.

Chris Hughes was among the players affected by that performance, and the racing fan and former Love Island star tweeted: “I do not think I have ever seen anything like this in my life.”

FREE BETS GET OVER £ 2,000 IN REGISTRATION OFFER HERE

Commercial Content Notice: Accepting one of the bookmaker offers in this article may result in a payment to The Sun. 18+. T & Cs apply. Begambleaware.org

A responsible gambler is a person who: