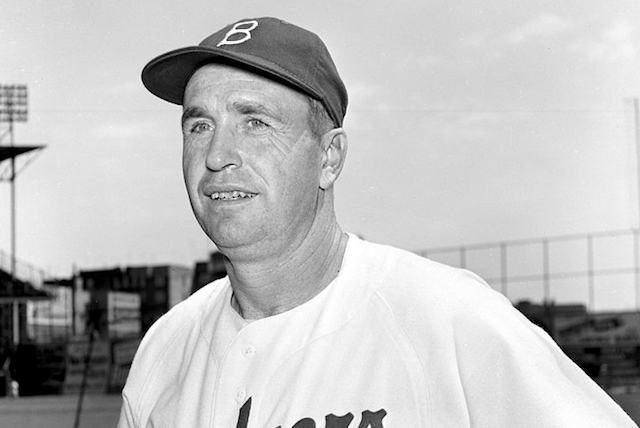 On November 24, 1954, the Brooklyn Dodgers hired Walter Alston as their manager. His No. 24 jersey is retired and hangs in the Dodger Stadium Ring of Honor as he is considered one of the best managers in franchise history.

Alston began his coaching career as a player manager in 1946 for the Nashua Dodgers of the Class-B New England League, the first integrated American baseball team of the 20th century. He managed former Dodger greats like Roy Campanella and Don Newcombe on that team.

The Dodgers had never won a World Series before Alston took over, but under his supervision conquered titles in 1955, 1959, 1963 and 1965. He managed a number of major players such as Sandy Koufax, Don Drysdale, Jackie Robinson and Duke Snider.

Alston was named National League Manager of the Year six times and he managed NL All-Star teams with a Major League record nine times and won seven of those matches.

In 1983, Alston was inducted into the National Baseball Hall of Fame by the Veteran’s Committee, even though he was unable to attend the ceremony due to a heart attack he suffered just before.

He died of complications from the heart attack just a year later on October 1, 1984 at the age of 72 years.

Another Dodger icon, Tommy Lasorda, played and coached under Alston and then went on to succeed him as manager, bringing two more World Series to Los Angeles in 1981 and 1988.

Have you subscribed to the Dodger Blue YouTube channel? Be sure to ring the announcement bell to watch player interviews, attend shows and giveaways, and stay up to date on all Dodgers news and rumors!