It’s pretty fleshy when you see it designed that way.

In just four months, the SNP – because if it aggressively claims exclusive ownership of a political campaign, there is no one else to blame when heading south – has turned a 10-point lead into independence in a seven-point advantage for the Union with the same voting company.

And while it’s pretty brutal in itself, it’s not even the real fly of the ointment.

Because once you have a referendum (or in fact a plebiscite election), you can always change things in the campaign. Being slightly behind on departure is not a big deal. But to get this referendum first, the SNP has relied on the moral strength of a majority of Scots who support it.

This, as Wings has been pointing out for many months, is a terrible plan anyway when his target is Boris Johnson, a man of detectable zero morality. But even if it was the kind of silly fool you never thought could work, it gets completely torn when you don’t HAVE most Scots behind you.

In December, in addition to a 10-point lead for independence, ComRes found that 52% of people planned to vote for pro-independence parties in the constituency vote and 50% on the regional list. The two votes tend to get an almost enough identical number for fairly obvious reasons, so you can make a reasonable average, giving you a total of 51% of votes cast for parties betting on a new referendum.

This is a thin margin, but it is majority and therefore you can use it to say legitimately “Most Scots have voted for indyref 2, so democracy is asking for it to happen”. If 51% of the vote is enough for something as big as taking the UK out of the EU, it can’t be credibly argued that it’s insufficient for anything else. But where are we now?

The most recent figures give Yes parties only 45% of the constituency vote and 48% of the list (totally up to a drop in the SNP vote: Alba and the Greens have stood firm). This is an average of 46.5%, which are NOT majority. If these were the actual vote numbers, a clear majority of Scots would have voted for OPPOSITE parties to a second indyref, and even in the fantastic land where Boris Johnson is susceptible to a “morality” argument, he wins and the game is a bogey.

Of couse, as we predicted yesterday, the SNP they are blaming everyone. 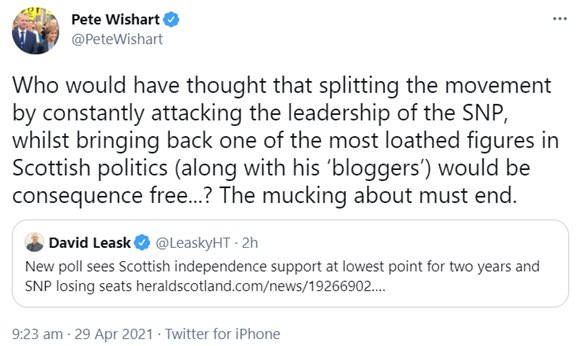 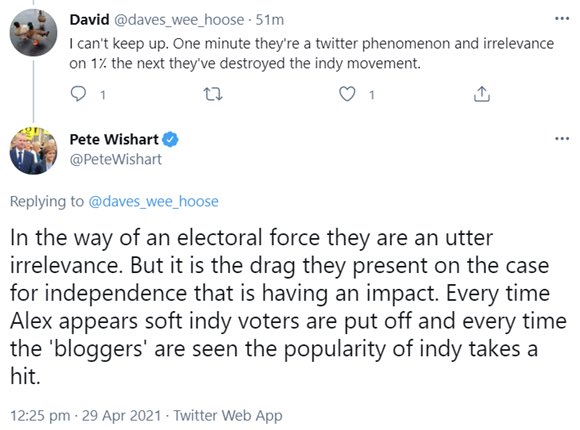 But the awkward truth for Pension Pete is that the graph above clearly shows that the SNP had dropped the ball before Alba never showed up. The leadership of the Yes and the majority of votes had disappeared in early February, with the No in three points and the combined vote in favor of the referendum was reduced to 49%.

The first poll that included Alba, three weeks ago, actually raised the independence figures to 50-50 after two months without a majority, (perhaps because Alba really talked about independence), and raised the numbers of vote of 49% a 50.5%, a small but crucial step along the winning line.

But weeks of relentless Alba that the SNP has rejected have once again exploited it: they have managed to get Alba’s vote rejected in a fractional way, but at a significantly higher cost to themselves, as they have repelled some of his own followers with a harmful and harmful hatred. against a pro-independence party made up of the majority of its own former MPs, MSPs, councilors and incumbents.

(Alba didn’t: Alba has been telling people to vote SNP in the constituency with every breath, even as the SNP attacks them non-stop and bitterly).

The result of the adoption of a furious pike by the SNP over a month is that now the Yes goes through seven points with the No and, as we have said, the electoral vote has dropped to 46.5 %.

You just can’t claim any kind of democratic mandate for a binary election with less than 50% of the vote. Claiming it based on the majority of seats coming from less than a majority of votes is the kind of thing we call blue murder when the Conservatives do it in Westminster, and rightly so.

There are differences of opinion as to whether this is exactly what the SNP has always wanted to achieve, of course. But whether they intended to or not, that is unquestionably what has happened. The alleged captains of the indy ship have thrown a huge hole in the bottom of the hull trying to kill what they see as rats and unless they stop firing and start hitting in the next six days, we will all sink with it.